A Concert Celebrating the Seven Bridges of Königsberg

A long time ago, in a city far, far away, a mathematician solved a puzzle, the solution of which made our modern, connected world possible. Georgia Tech's School of Music and School of Mathematics have teamed up with local Atlanta artists to create a performance combining contemporary dance, original music, and storytelling. Called The Seven  Bridges of Königsberg, the concert celebrates this history and aims to spark people’s curiosity and convey the wonder of mathematics.

The classic puzzle that inspired Leonhard Euler to found the fields of topology and graph theory (or network theory) asked the simple question: Is it possible to cross all of the seven bridges of the city of Königsberg exactly once, with no repetition or backtracking?

Euler was not content with a yes-or-no answer. Instead he began to think about the nature of connectedness in a mathematical way, as it applies to all possible cities with any number of islands and bridges; as well as to networks of transportation, commerce, and communication; to the pathways by which diseases or ideas spread; and ultimately to our contemporary interconnected life.

The Seven Bridges of Königsberg was selected by a new program called Science in Vivo, funded by the Simons Foundation, to receive one of its inaugural 10 awards as an Experimental Site “exploring what is possible when science experiences for the public are integrated into existing cultural gatherings.”

The debut performance on Sept. 13, 2018 will take place on the Georgia Tech campus along Atlantic Ave, where an installation of the Seven Bridges of Königsberg puzzle was constructed earlier this year.

To tell about the foundation of graph theory, the Georgia Tech Symphony Orchestra will perform a new composition by composer Marshall Coats, while a math team and dancers interpret the story and some concepts about graphs, as choreographed by guest artist Kristel Tedesco.

This performance will be repeated at the Bailey Center in the Kennesaw State University on Sept. 23, 2018. Other versions of the show will take place at public locations around Atlanta and the Southeast region in September and October.

In addition to the spectacle, the audience will have opportunities to explore mathematical puzzles and games and to personally engage with the mathematicians and artists.

11:00 AM Interactive exposition by Club Math

The Seven Bridges Plaza is along the Atlantic Drive Promenade, right next to the Howey Physics Building.

By Georgia Tech Trolley: Get off at the intersection of Ferst Drive and Atlantic Drive. Walk toward the Einstein Statue, The Seven Bridges Plaza will be on the right, past the Howie Building. You can catch the Georgia Tech Trolley at the MARTA Midtown station.

If you are coming from south of Atlanta:

If you are driving from the east or west: 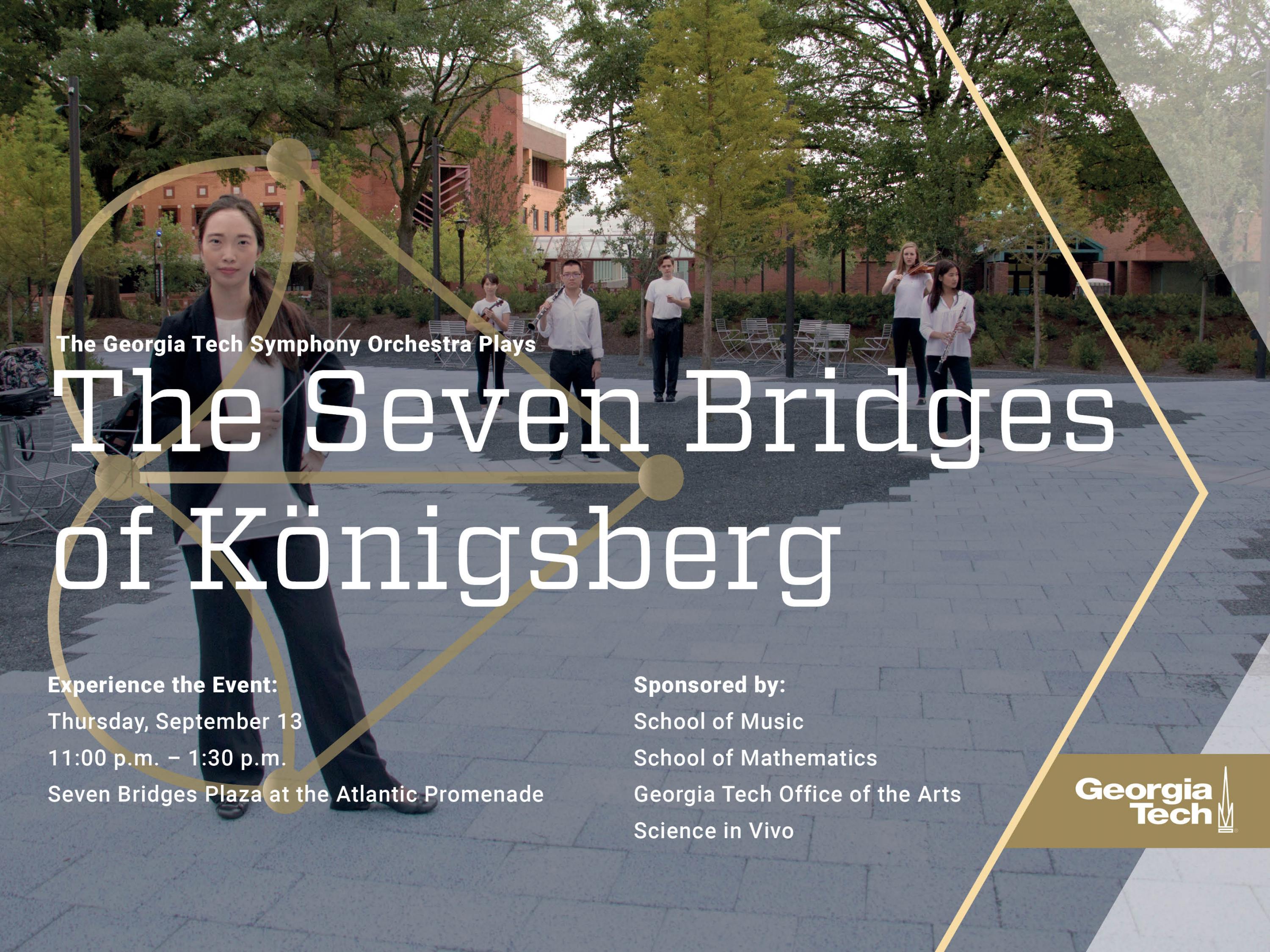 Celebrating the Seven Bridges of Königsberg