Cosmology and Exoplanets: Unpacking the 2019 Nobel Prize in Physics

Cosmology studies the universe at the largest scales, applying the laws of physics over billions of light years and all the way back to the universe's infancy. In dozens of groundbreaking publications, Jim Peebles laid the foundations for theoretical cosmology, painting a picture of how matter evolves from the moments after the Big Bang into a cosmic web of dark matter and galaxies. His work set the stage for current research that routinely uses supercomputer simulations to study the astrophysics of galaxies.

Closer to home, people have speculated the existence of planets outside of our own solar system for centuries. However, there was no way of knowing whether they exist and how common they are. In 1995, the first discovery of an extrasolar planet, or exoplanet, orbiting a Sun-like star was made by Michel Mayor and Didier Queloz, who detected the signatures of the planet 51 Pegasi b as it pulls its host star. This discovery marked a breakthrough in astrophysics and led to various fields of interests, including the formation and habitability of exoplanets.

John Wise is an associate professor in the School of Physics. He uses numerical simulations to study the formation and evolution of galaxies and their black holes. He is one of the lead developers of the community-driven, open-source astrophysics code Enzo and has vast experience running state-of-the-art simulations on the world’s largest supercomputers.

He received his B.S. in Physics from the Georgia Institute of Technology in 2001. He then studied at Stanford University, where he received his Ph.D. in Physics in 2007. He went on to work at NASA’s Goddard Space Flight Center just outside of Washington, D.C., as a NASA postdoctoral fellow. In 2009, he was awarded the prestigious Hubble Fellowship, which he took to Princeton University before joining Georgia Tech in 2011, coming back home after 10 years roaming the nation.

Gongjie Li is an assistant professor in the School of Physics and the School of Earth and Atmospheric Sciences. She studies the dynamics and formation mechanism of planetary systems, as well as stars around supermassive black holes.

She received her B.S. in Astrophysics from the California Institute of Technology in 2010 and her Ph.D. in Astronomy and Astrophysics from Harvard University in 2015. She stayed at Harvard as a Junior Fellow before joining Georgia Tech in 2018. 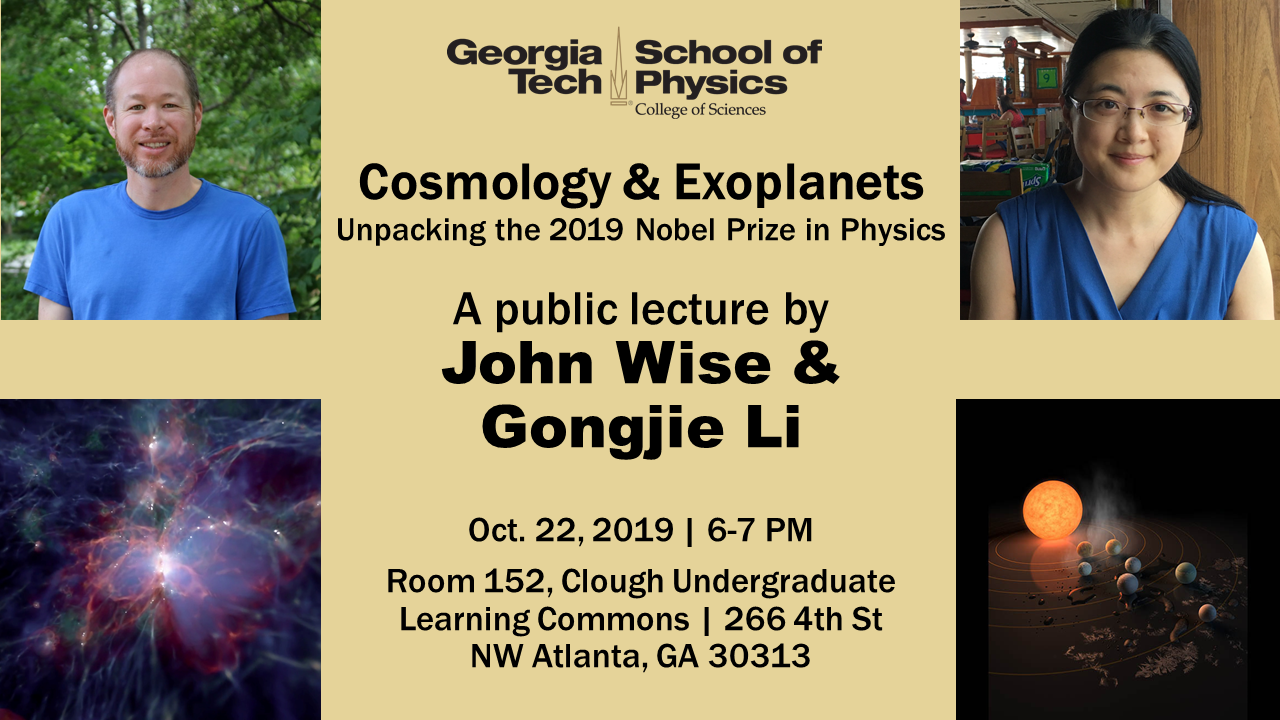 Unpacking the 2019 Nobel Prize in Physics