From a tumultuous beginning to a journey of healing 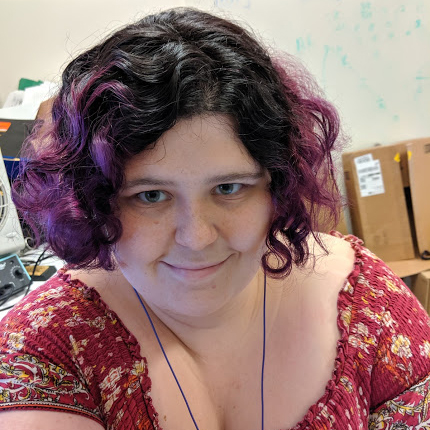 Andrea Jayne Welsh was raised by a single mother. An English and special education teacher, her mother was not scientifically inclined but hard working and supportive. When Andrea was still young, her mother remarried. Andrea’s stepfather built houses. He talked to Andrea about mathematics. He taught Andrea computational tricks to calculate the amount of a tip, for example.

Amid the chaos, Andrea focused on school and taking care of her younger sisters. “I became interested in studying math and physics because I wanted to learn more about how the world worked,” she says.

Although she was also interested in writing and telling stories, Andrea chose to study physics at Boston University, where she met her now-spouse Michael “Mike” Dimitriyev, also a physicist and currently a postdoctoral fellow in the School of Physics.

After receiving their B.S. degrees in physics and mathematics from Boston University, Andrea and Mike took different paths. Andrea took a mathematics graduate fellowship at the University of Texas, Austin. Mike went to Georgia Tech to pursue a Ph.D. in physics.

“This first year of grad school was hard because of the distance from my family and my partner,” Andrea says. Eventually she made a difficult decision: leave the math program and attempt a Ph.D. in physics at Tech. “Starting at Georgia Tech was hard,” she says. “But it worked out for the best.”

What attracted you to Georgia Tech?
I had already begun a Ph.D. in pure mathematics at University of Texas, Austin; however, I realized that I missed physics too much and wanted to change fields.

My now-spouse, Mike Dimitriyev, was doing a Ph.D. in physics at Georgia Tech. His graduate advisor was seeking other students. I reached out to the professor about wanting to change directions and being interested in nonlinear dynamics. During my spring break I visited and enjoyed my meetings in the department.

What is the most important thing you learned at Georgia Tech?
Take care of yourself. Everything else comes later.

What are your proudest achievements at Georgia Tech?
My dissertation talk.

I felt so confident.  So many people who have known me through different ways came to support me. I had fun sharing my research with others.

Which professor made a big impact on you?
My advisor, Flavio Fenton, supported my interests beyond research. I was able to split my time for activities such as diversity, inclusion, and mental health support. Other professors would not have allowed that.

My advisor also allowed me to come to him for support and advice on personal matters, when I had no other person to look up to. This kindness has been important in my transition not only as a professional academic but also into adulthood.

What is your most vivid memory of Georgia Tech?
Hosting the 2016 American Physical Society (APS) Conference for Undergraduate Women in Physics at Georgia Tech

This was the first time that APS allowed a graduate student to chair one of these conferences. It was also the first time that Atlanta had over 200 women physicists at the same time. We had great talks by amazing physicists like Dr. Jane Rigby from NASA, Professor Meg Urry from Yale University, and Sue Payne from Exxon-Mobil. The entire weekend was such an amazing experience that I will never forget.

How did your time at Georgia Tech transform your life?
When I started at Georgia Tech, I was in a bad place mentally. Right away, I went to the Counseling Center and joined group therapy.

This was terrifying because I talked about family concerns that I hardly spoke about with other people. This got me started on a long journey of healing from childhood traumas. Without  the people in the Counseling Center and subsequent visits at the Stamps Psychiatry Clinic, I don’t think I could have finished my degree, or even have survived up until this point.

What unique learning activities did you undertake?
My advisor encouraged me to look for conferences I wanted to attend so we could discuss and apply for funding. With funding support, I attended conferences in Salt Lake City, Los Angeles, Madrid, Bilboa, Valencia, Dresden, Berlin, Göttingen, and more. I am very fortunate to have had these opportunities to see other places, meet other researchers, and present my work.

What advice would you give to incoming graduate students at Georgia Tech?
Take breaks.

Make time for sleep. Those few extra points on that problem set or test mean very little in the long run. Your sleep is important and will help you stay focused the next day.

Schedule hobbies and fun activities, because you’ll do them only if they are in your busy schedule.

Where are you headed after graduation?
I am applying for postdoctoral and faculty positions at different universities.