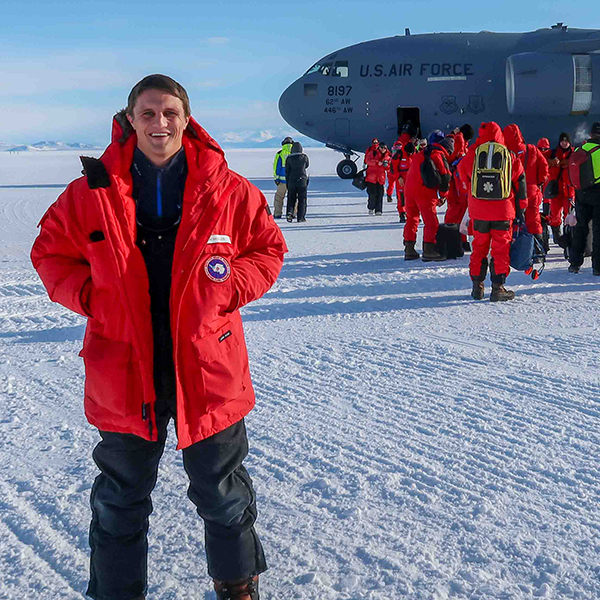 Andrew Mullen knows the ocean well. From doing oceanographic research as an undergraduate intern  at the University of Alaska, Fairbanks, to studying marine organisms during graduate school at the University of California, San Diego, Mullen must feel very much at home while at sea.

While an undergraduate student at the University of Notre Dame, Mullen traveled to the Republic of Benin, in West Africa, where he studied groundwater hydrology. While in graduate school, he studied coral reefs in Eilat, Israel, and researched the mass spawning of grouper in the Cayman Islands.

Mullen has a B.S. degree in civil engineering, an M.S. degree in oceanography, and a Ph.D. in electrical engineering. At Tech, he applies his curiosity and love of ocean and adventure to a field that is new to him: astrobiology, the science of life on Earth and beyond.

“As someone new to astrobiology, I find this whole field intriguing and astonishing,” Mullen says. He is fascinated by the scientific community’s confidence that liquid water exists on several other planetary bodies in our solar system including Europa, Enceladus, and perhaps even Mars, even though this liquid water occurs beneath the surface. He finds compelling NASA’s use of “analog” environments on Earth as test beds and laboratories to prepare for future space missions. One such analog is Antarctica, the stand-in for under-ice marine environments in the icy moons of Jupiter and Saturn.

Mullen came to Georgia Tech to work with Britney Schmidt and the Icefin team. Schmidt is an assistant professor in the School of Earth and Atmospheric Sciences. Icefin is a specialized underwater robot developed in Schmidt’s lab with funding from NASA. It was designed to operate beneath ice shelves in Antarctica to study under-ice marine environments. In fall 2018, he spent nine weeks with the team at McMurdo Station, deploying Icefin.

“I have always wanted to contribute to NASA's mission of science and exploration, and I love the challenge of conducting research in harsh field environments,” Mullen says. “It is a dream opportunity for me to do field work in Antarctica for NASA.”

Mullen’s project is titled “Digital Holographic Microscopy on the Icefin Underwater Antarctic Vehicle: Technology & Science Development for Icy Worlds.” The project takes advantage of skills Mullen developed during his Ph.D. research, which focused on the design and application of underwater microscopic imaging systems to study marine organisms in their natural environment.

Mullen leads a collaboration between the Jet Propulsion Laboratory and Georgia Tech to develop a custom digital holographic microscope and water sampler to operate underwater on Icefin. The microscope will enable researchers to look for microorganisms based on their movement and shape.

One of NASA's central missions is to search for life and habitable environments beyond Earth. In the solar system, Jupiter’s moon Europa is one of the most likely candidates to harbor a potentially habitable environment. Europa has a thick icy shell beneath which, scientists believe, lies a large ocean of liquid water. On Earth, the oceans beneath ice shelves – such as those in Antarctica – are among the environments most analogous to those likely existing on Europa.