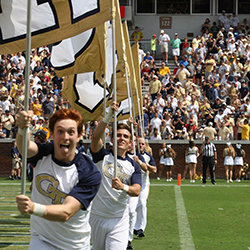 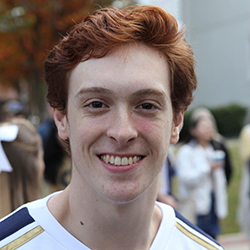 It took one practice for Piero Chiappina to fall in love with cheerleading. He had arrived dragging his feet, only to appease the high-school cheerleading coach, who wouldn’t leave him alone.

The coach spotted Chiappina at the cheerleading gym, where he trained for tricking, an acrobatic sport that borrows elements from martial arts, gymnastics, and breakdancing. He had been tricking since he was about 10 years old, going on to win first place in the Red Bull Throwdown junior division during his fourth year at Pope High School. The coach recognized that he already had the body awareness to do flips.

“I didn’t want anything to do with it,” Chiappina says of cheerleading. He had been promised that he’d be left alone if he attended just one practice. But by the end of that practice, Chiappina wanted more. He was captivated by the outgoing energy of cheer. “I really enjoyed the people more than anything,” he says. “I fell in love with that environment because I was, and still am, very introverted. It was refreshing to be forced to come out of my shell.”

He cheered for his last two years of high school before committing to four years at Georgia Tech.“I missed my senior prom to go to cheer tryouts,” Chiappina remembers, laughing. “It was really crazy.”

This is his first year not cheering since he arrived at Georgia Tech in 2014.  Chiappina needs to focus on his research. His double major in Electrical Engineering and Physics takes him down the road of quantum computing, and he has been accepted to both Physics and Electrical Engineering Ph.D. programs, though he’s still deciding which to attend.

“These systems have significant advantages over regular computer systems,” he says, “It’s a major push to show that these are ready to be commercialized.” He wants to be not just a contributor to the field, but a major voice. It’s the same drive that keeps his love of cheerleading alive.

“I like to challenge myself not only on an intellectual front, but on an athletic front as well,” he says.   “Cheerleading is perfect for that. All the skills you learn – like tumbling, flips, and throwing people – give you a body awareness that’s really interesting.

“I’ve been privileged enough to watch the level of cheerleading at Georgia Tech grow tenfold over the four years that I’ve been year.” He credits that growth to management and its push to get Tech’s name out and attract great athletes to the program.

Although Chiappina isn’t active on the team this year, he’s still very much a part of the cheer family. Three of his roommates are on the cheer team, and he continues to stay in touch with others. 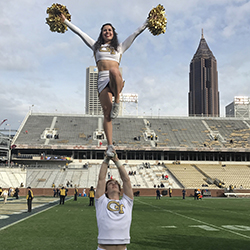 Which do you love more: competition or game day?
I started off liking competition more, because that’s the background I came from in high school. But the more time that I stayed in the program, the more I came to liking game day, because I really enjoy the atmosphere of being at a game and getting the fans hyped up. That experience has grown on me more than any other.

What has been the most challenging aspect of cheerleading?
Managing my time. We’re basically doing some activity every single day of the week. There are very few days in the semester that we’re not practicing, or working out, or at a basketball game, or football game. It’s at least a part-time job. I struggled with getting enough sleep up until my first year. Being part of a high-level activity, where you have to be athletically and physically present at every event – and there’s an event pretty much every day – forces you to manage your time. It forces structure into your schedule. If you don’t keep up with the pace, it can be very tough to juggle all those things.

What has been the most surprising about cheer?
In the last semester I’ve learned that there is a critical number of activities you can be in that maximizes your productivity. Now that I’m not on the team, I’ve relieved myself of a lot of responsibilities and time commitment, but I get the same amount of work done as I did when I was on cheer. It makes me think that cheerleading forces you to have a structure and to take advantage of every single moment you have.

Who are your role models?
My parents are two of my biggest role models. I watched my father work absolutely way too hard but reap the benefits, and I’ve watched him move to a very successful position in his company through a lot of hard work. He has instilled a lot of my work ethic. It has helped to shape my character. My mother worked very hard to make sure that I didn’t have to worry about things like eating. She took it upon herself to make sure that I could put 100% of my effort into my extracurricular activities or whatever it was that I loved to do. I really respect her for that.

Do you have any advice for aspiring student athletes?
Prepare for a lot of work. But on the flip side, it’s easy to get caught up in the enormous amount of school work. Don’t let that stop you from soaking up the entire athletic experience. That’s one of the mistakes that I frequently made. Being an athlete at Tech doesn’t last forever; you need to appreciate the environment you’re in. It’s not something you’re going to get a chance to do again in your life. Cherishing those moments will make your athletic experience that much more enjoyable.