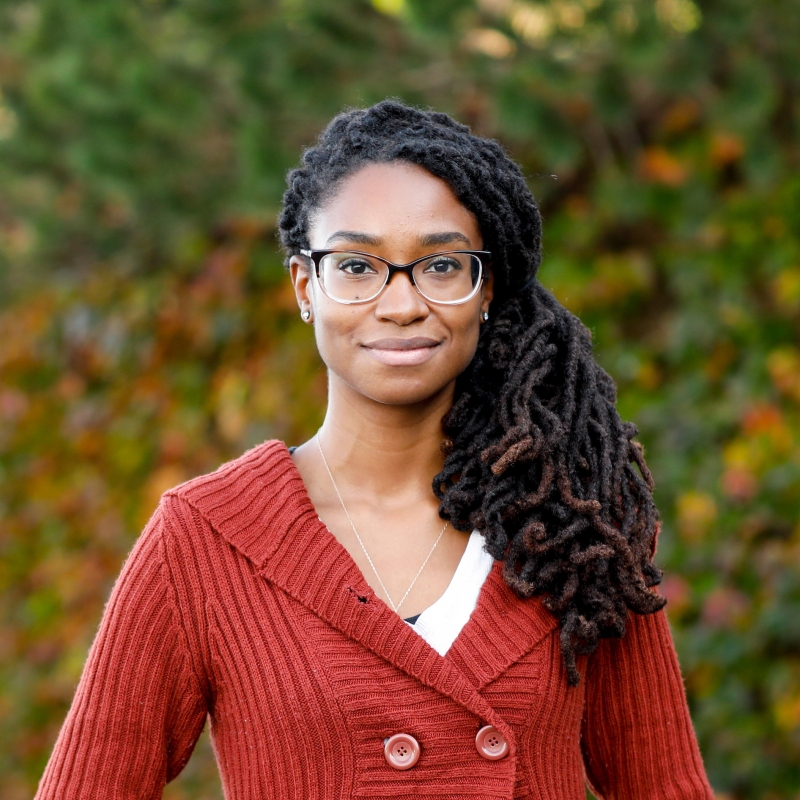 Shannon Gabrielle Valley grew up in St. Louis, Missouri, and Houston, Texas. She attended a public high school. Although scientifically inclined, Shannon felt intimidated by introductory science courses and pursued other interests in college. She received a Bachelor of Arts degree in political science and international studies from Northwestern University. Now, she is among the first generation in her family to earn a Ph.D.

Fresh from college, Shannon worked on President Barack Obama’s first campaign. For the next five years after Obama’s election, she worked in the Obama Administration briefly at the White House and mostly at NASA Headquarters, serving as a liaison between NASA’s science programs and Congress.

Eventually, “I got restless escorting other scientists and engineers to Capitol Hill,” Shannon says. “I wanted to pursue my own research. I’d also been concerned about climate change ever since Hurricane Katrina struck next door to my home in Houston. I wanted to personally contribute to the better understanding of our Earth’s systems.”

Coming to Tech was part of Shannon’s career pivot.

While still at NASA she started taking prerequisite math and science courses in the evenings. This time she had homework assistance from some of the nation’s best astrophysicists.

At Georgia Tech, Shannon studied Earth’s climate history through paleoceanographic research. “Leaving the political/policy world of Washington, D.C. for academia in Atlanta was a bit of a culture shock,” Shannon says. “But I’m convinced I’ve experienced the best of both worlds!”

What attracted you to Georgia Tech?
Georgia Tech alumni run deep at NASA! I would not had considered applying had it not been for the encouragement of my former colleagues. Once I visited Tech and met with my advisor, I knew that the city, university, and department were a good fit for me.  Other departments I visited thought my career experience was interesting. But my advisor at Tech was explicit about helping me develop an education and research plan that both played to my strengths and shored up my lack of undergraduate scientific research. It was that promise of setting me up for success that sealed the deal for me.

What is the most important thing you learned at Georgia Tech?
It took a long time to internalize, but I learned to work from a place of curiosity, not from a drive for perfection. Science can be humbling.

From my professors, students I’ve taught, and colleagues and collaborators I’ve met along the way, I’ve learned that if you let the honest exploration of curiosity be your guide, it’s hard to go wrong.

What are your proudest achievements at Georgia Tech?
Receiving the National Science Foundation Graduate Research Fellowship.

Having nationally recognized support of my work was incredibly encouraging. I also participated in the Climate Change Fellows Program at Tech, which I think will accomplish important interdisciplinary work.

Which professors made a big impact on you?
My thesis advisor, Jean Lynch-Stieglitz, is an amazing mentor. She is attentive to her students’ needs both as developing researchers and as people. I hope to pay forward her mentorship as I progress in my career.

What is your most vivid memory of Georgia Tech?
Storming the field after an upset over Miami back in 2014 was a great memory.

More recently, my lab mate and I almost flooded our lab trying to replace a water filter (sorry, Jean). That was wild.

In what ways did your time at Georgia Tech transform your life?
The most life-changing thing that happened during my time at Tech took place at home. My father was ill with cancer and passed away.

I struggled dealing with that loss and maintaining my research, but the memory of his encouragement motivated me to go on.

I’m grateful to have had such a great network of friends and colleagues at Tech during the ups and downs of my time here.

What unique learning activities did you undertake?
I participated in a deep-sea sediment coring cruise from Woods Hole, Massachusetts, to the Azores, in Portugal. In my research, I analyze such sediment to understand past changes in ocean circulation.

It was an amazing experience; I loved being out in the open ocean, and it gave me a new respect for all the work that goes into selecting coring locations, retrieving the cores, and preparing the cores for sampling.

What advice would you give to incoming graduate students at Georgia Tech?
Everyone talks about finding work/life balance, but I’d go further to specifically encourage making local friends outside of academia, who can get you out of the bubble now and then.

It’s helpful to have people to hang out with on weekends, who can remind you that life doesn’t start or end on the outcome of one dataset or lab group presentation.

Atlanta has a lot to offer; there are plenty of opportunities to give back to the local community. So take advantage!

Where are you headed after graduation?
I aim to combine my policy experience and research skills to manage programs that enable sustainable natural and human systems amidst a changing climate.

Climate change affects these systems in complex ways. Georgia Tech has prepared me with rigorous analytical skills necessary to address these challenges.