Skolnick is the Mary and Maisie Gibson Chair, the Georgia Tech Alliance Eminent Scholar in Computational Systems Biology, and a professor in the School of Biological Sciences. He is also the director of the Center for the Study of Systems Biology.

In his research, Skolnick has developed algorithms to predict protein structure and function and ligand-protein interactions. Applications include drug discovery and prediction of off-target uses of already approved drugs.

Skolnick pioneered the field of ligand homology modeling, using the modeling algorithm FINDSITEcomb to infer protein function, predict a protein’s binding site, and screen virtual ligands. The insights from this work has enabled use of even low-resolution protein structures in virtual ligand screening. Skolnick is applying this knowledge to find other diseases that approved drugs could treat.

Drugs of interest include granisetron (Kytril), an antinausea and antiemetic agent; progesterone, a female hormone; acetaminophen, a pain reliever; and naproxen an anti-inflammatory and analgesic agent. Among diseases that existing drugs might help treat are cancer, pain, cardiovascular diseases, neurological diseases, cystic fibrosis, and diseases caused by genetic variations.

“The biochemical seeds of life could be prevalent.”

Using another algorithm, Skolnick has found a way to boost the odds that disease organisms will not quickly develop resistance to an antibiotic. The algorithm identifies compounds that target two or more receptor sites on proteins that inhibit a key cellular function. To develop resistance to such drugs, microbes would have to simultaneously develop mutations in all the target receptor pockets. Simultaneous mutations would be more challenging to the bugs than developing resistance in only one receptor site. The technique has been validated for a drug-resistant Escherichia coli.

Skolnick’s adventures with protein structures and functions have profound implications for the origins of life. For example, Skolnick and coworkers have shown that the ability to catalyze biochemical reactions is an intrinsic property of protein molecules, defined only by their structure and the principles of chemistry and physics. Accordingly, evolution is not necessary for the existence of proteins’ biochemical functions, although evolutionary selection may have optimized proteins for specific roles.

“The biochemical seeds of life could be prevalent,” Skolnick said about the work in 2016. “If you rain meteorites containing amino acids and somehow these polymerize to form small proteins, then a subset of these would fold to stable structure and a small subset of these could engage in rudimentary metabolism, all without any selection for biochemical function. Thus, the background probability for function is much larger than had been previously appreciated.”

By extension, extraterrestrial life could be ubiquitous.

The ability to do out-of-the-box research has been a hallmark of Skolnick’s career. “I am most grateful,” Skolnick says, “to the environment provided by Georgia Tech and to my collaborators who have enabled these ideas to come to fruition.” 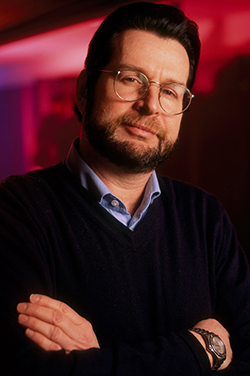