Most vivid memory of Tech is a marriage proposal, which she accepted, by the Campanile

Mary Elizabeth deVaux Lee fell in love with physics in high school. An early influence may have been her parents, both of whom had backgrounds in science and higher education. But it was the incredible AP Physics teacher in Dunwoody High School, Bradley Hendrickson, who cemented physics as her career choice.

Hailing from Dunwoody, Georgia, Lee says “choosing Tech seemed like a no-brainer.” She loved that she’d be able to visit her family regularly and that she could qualify for a Hope or Zell Miller Scholarship. Because she had set her sights on astrophysics, the School of Physics’ Center for Relativistic Astrophysics was icing on the Georgia Tech cake.

Lee is graduating with a B.S. in Physics, just the first milestone in the career path that began in that AP Physics class years ago. She plans to pursue a Ph.D. in soft-matter physics.

I learned an incredible amount, from the huge body of knowledge in my field, to how to be a good leader, to how to manage my time, to where the best places to sleep in are in Howey Physics Building. Tech far exceeded the expectations I had as a freshman in every way.

On a personal level, one of my proudest achievements is when Steven Strogatz tweeted about a talk I gave at the 2015 SIAM Conference on Applications of Dynamical Systems, in Snowbird, Utah. Still only a freshman, I talked about experimental nonlinear dynamics research I was performing with Flavio Fenton. Strogatz is a leader in nonlinear dynamics and has written the definitive textbook on it. So I was more than slightly apprehensive when I realized he was in the room, but thrilled when he tweeted that he had enjoyed my presentation.

On a larger scale, I'm incredibly proud of all I've accomplished with the Society of Women in Physics as treasurer and as president. In 2016, we hosted the first Conference for Undergraduate Women in Physics to be held at Georgia Tech, which was a large success.

On a less grand scale, it has been great to watch the club and the number of women in the School of Physics grow.

Flavio Fenton made the largest impact on me. I did research in his lab for two years, beginning in my freshman year. He helped me not only with my research, but also with my presentation and writing skills. He pushed me to present at several major physics and mathematics conferences. With his help I applied for and was awarded both President’s Undergraduate Research Award (PURA) Salary and Travel Awards.

Another great research mentor is Sabetta Matsumoto. I worked with her in the past year on a topological soft-matter project. With her help, I again received funding from PURA. Based partly on research I did with her and the example she set, I've decided to pursue soft-matter physics in graduate school.

I’ve also been inspired by Deirdre Shoemaker, the advisor for the Society of Women in Physics. I interacted with her in my capacity as officer of the club for the past three years, two as treasurer and currently as president. As the club’s advisor, Shoemaker has been invaluable as an interface with the school.

The most impactful class I took at Tech is one on soft-matter physics taught by Alberto Fernandez-Nieves. The class not only cemented my interest to continue graduate studies in soft-matter physics, but also allowed me to further explore my future field. The class is just fantastic. Fernandez loves his subject, and he gets so excited while teaching that it’s hard not to share his joy.

When my now-fiancé proposed!

He graduated from Tech several years ago. We met during my first year at Tech. One of our favorite things to do while he was here and whenever he visits (he’s currently in graduate school in Massachusetts) is walk around campus together. Last semester, he surprised me with a visit and then proposed in front of the Campanile.

In high school I was a very nerdy, very quiet person, and now I am still very nerdy, but slightly louder person.

Joking aside, Tech helped me break out of my comfort zone and feel comfortable to keep doing so. I would never have held so many leadership positions before Tech or had the confidence in both myself and my knowledge that I do now.

I did undergraduate research, beginning in my first year. I worked with Flavio Fenton for two years on a tabletop nonlinear dynamics experiment. In my final year, I worked with Sabetta Matsumoto on a topological soft-matter project involving knitting.

Both experiences expanded my scientific presentation and writing skills, in addition to teaching me how to do good research.

I have a younger brother at Tech, so I'll give the same advice I gave him.

Where are you headed after graduation? How did your Georgia Tech education prepare you for this next step?

I will be getting a Ph.D. in physics! I’ve committed to the University of Massachusetts, Amherst, and will be starting my Ph.D. studies there in the fall. 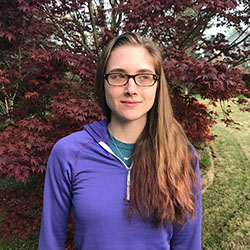