He’s on an amazing journey: from the Science Bowl to Oxford University via Georgia Tech

Calvin Runnels always loved to learn, no matter the subject. This intellectual appetite drew the Louisiana native to Latin, cello, theater, art, writing, and finally, the sciences. At Baton Rouge Magnet High School, in Louisiana, he became very involved in the Science Bowl and Science Olympiad.

The year that Runnels began looking at colleges, his older sister started attending the University of Georgia. He decided to follow her to Georgia, choosing Georgia Tech for the opportunities it offered.

“I could tell that students here accomplish amazing things and fiercely love the Institute, as hard as it may be,” Runnels says.

Runnels is graduating with a B.S. in Biochemistry, completing his degree in three years. He is heading to Oxford University, in England, as a Rhodes Scholar.

How to prioritize and manage my time. We are all so impossibly busy here that it becomes necessary to learn how to put the important things first.

I expected that studying at Georgia Tech would be hard, but the caliber of people here exceeded my expectations. I have met some truly incredible people at Tech.

“The rigor of a Georgia Tech education has more than prepared me for study at Oxford University, one of the premier universities in the world.”

I am proudest of the contributions I made to student life through my work in the Student Government Association, the Undergraduate Research Ambassadors, and the President’s LGBTQIA Community Support Action Team. I helped organize the first-ever Undergraduate Research Fair, in spring 2017, and Inclusive Leadership Conference, in spring 2018. I have advocated for better accommodations and resources for queer and trans students on campus.

He inspired me to want to make a career in science and has always believed in and been supportive of me. I have been conducting research in his lab since the first semester of my freshman year.

One of my most vivid memories of Georgia Tech is the Student Solidarity Rally in 2017, my sophomore year, in support of international students.

It was incredible to see over a thousand Yellow Jackets, students, faculty, and staff gathered at the Campanile to stand in solidarity with fellow members of the Georgia Tech community whose safety and security had been threatened by the executive actions of January 2017.

If I had not come to Georgia Tech, I may never have considered becoming a scientist/professor. I don’t think I would have developed the resilience and fundamental capability that the Georgia Tech “We can do that” attitude has instilled in me.

Georgia Tech has made me feel confident enough in my abilities to pursue opportunities that I might have ignored otherwise, such as applying for the Rhodes Scholarship.

I participated in undergraduate research in the Williams Lab during all six semesters I have been on campus, including as a 2017 Petit Undergraduate Research Scholar. My research has inspired me to pursue a career in academia and has sharpened my critical thinking and scientific reasoning skills more than any class ever could.

I studied abroad in Lyon, France, with the BEST study-abroad program of the School of Chemistry and Biochemistry. Studying abroad was an opportunity to practice my French and opened my mind to the distinct experiences that international travel can offer, making me all the more excited for my next step of living abroad in England.

What advice would you give to incoming undergraduate students at Georgia Tech?
Never be afraid to take the opportunities that you see and that are offered you. There is too much available for you to do it all, but you never know what might be the organization or activity that becomes the defining involvement of your college career. You are not too inexperienced or too untalented to try anything that this campus has to offer.

In October I will start pursuing a second Bachelor’s degree – in Philosophy, Politics and Economics – at Oxford University as a Rhodes Scholar. The rigor of a Georgia Tech education has more than prepared me for study at one of the premier universities in the world. Tech has also helped me to explore and understand my areas of intellectual interest and given me the drive to pursue every opportunity that comes my way. 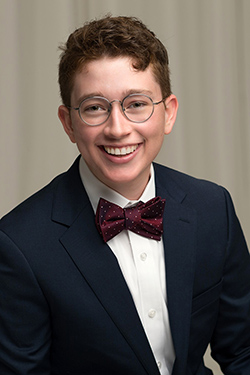