After failing a math course, she rallied and came back with straight A’s

Mathilda Simone Avirett-Mackenzie was born in Boston but grew up in Atlanta. For as long as she can remember, Georgia Tech had been an important part of her life.

Because her father, Kenneth Mackenzie, was a member of faculty in the Georgia Tech College of Computing until 2003, Mathilda grew up cheering for the Yellow Jackets while being encouraged to pursue science, technology, engineering, and math (STEM) subjects. No surprise that she developed a passion for science and mathematics at a young age.

While attending Atlanta Girls’ School, Mathilda spent two summers as an intern at the Materials Analysis Center, then a part of GTRI. Working there strengthened her love for STEM.

Through Georgia Tech’s Dual Enrollment program, Mathilda took college courses during her senior year in high school. That experience nailed her decision to attend Tech. “Actually experiencing the classroom environments here and walking around campus daily gave me unique insight into Georgia Tech culture,” she says. “I liked what I saw.”

Mathilda is the 2019 winner of the A. Joyce Nickelson and John C. Sutherland Prize, awarded to a top student in the College of Sciences studying at the intersection of physics and mathematics.

I learned to never, ever give up.

I've struggled academically, personally, and socially. At times I felt like I couldn't possibly succeed. At times I couldn't imagine making it to graduation. And yet here I am, about to graduate with highest honors.

I don't think I really knew what to expect when I started here. Georgia Tech has given me the most challenging, the most rewarding, and the most fun experiences of my life. I don't even regret the many bad experiences I've had here. They have taught me my most vital skills of tenacity and courage in times of hardship.

I'm the first author on a paper that is now in peer review in the journal Monthly Notices of the Royal Astronomical Society, which is amazing. Papers are a big deal for undergraduate researchers. It's great to see the payoff from the past three years of work.

I got an A in a class I'd previously failed. In fact I went from struggling with motivation, class attendance, and performance to making straight A’s in my last four semesters.

Which professor(s) or class(es) made a big impact on you?

MATH 4317 (Real Analysis 1) is the only class I've ever failed. I took it in fall 2015, which was the worst semester I've had for many reasons including a death in the family. I was intimidated by the material and didn’t have friends in the class. I did not attend most of the lectures, nor did I do most of the homework.

I learned that simply liking a topic is a terrible reason to pursue it, because the moment something happens to make it unpleasant there’s no reason to keep doing it. I concluded that the skills I was building with the math degree were too valuable to throw away because of one bad class in a tough semester.

I tried again in fall 2016, taking the class with Professor Christine Heitsch, who remains to this day one of my favorite instructors. This time I had the determination and diligence to succeed, as well as my professor’s support.

I had to work incredibly hard both to stay on top of my coursework and to overcome my fear of a repeat failure. It all paid. When I checked the final grades, I cried when I saw that I'd earned an A in the class I'd previously failed.

I thank Professor David Ballantyne for being an awesome research advisor. We've been working together for three years on a project designing and testing models of active galactic nucleus evolution.  He taught me nearly everything I know about being a good scientist. He challenged me, but remained supportive. He believed in me when I didn't believe in myself. I hope to be as good a mentor to young minds when I'm an experienced researcher.

During my first semester, I took Honors Physics 2 with Professor Shina Tan. He is one of the smartest people I’ve ever met, and the class is one of the most difficult I’ve ever taken. His assignments were so difficult that it took all students working together to make a dent.

For a homework on special relativity, I got together with friends in Clough Commons. We quickly filled up one of the rolling whiteboards with calculations. But before we got to a meaningful result, we heard that a larger group was working on it in Howey Building.

To keep the progress we had made, we sneaked the whiteboard out of Clough and wheeled it all the way up to Atlantic Drive to Howey. We carried it down the steps to a lecture hall and proceeded to fill up the entire lecture hall board and the board in the one next door before finally finding the answer.

It was my first college all-nighter and probably the last time I actually had fun doing tedious calculations.

In what ways did your time at Georgia Tech transform your life?

It was at Georgia Tech that I first truly felt a sense of community.

I was a bit of a loner growing up, often perceived as weird and nerdy, and picked upon. I never really felt like I belonged anywhere.

Within my first week at Georgia Tech, that aspect of my life changed. I discovered the Georgia Tech chapter of the Society of Physics Students, a group dedicated to physics education, community, and Super Smash Bros. For the first time, I was surrounded by people whose interests were similar to mine, who were as nerdy as I was, and who accepted me for who I was and wanted to be my friends anyway.

This group is something unique and special about the Georgia Tech School of Physics. I would encourage every incoming student interested in physics to check it out.

I spent three years working on a research project. I also did an REU (Research Experience for Undergraduates) with Professor Heidi Newberg at Rensselaer Polytechnic Institute in summer 2017.

Research experience is indispensable for any science major planning on graduate school. My advice is start as early as you can. Learning the techniques and ways of thinking that go with research is so valuable, even if projects do not achieve results.

In January 2019, I attended the American Astronomical Society meeting. For the first time, I felt the energy and excitement of seeing innovations in my field. It convinced me beyond a doubt that astrophysics is what I want to pursue in my career.

I was an undergraduate teaching assistant in the School of Mathematics for six semesters. I love working with students, which is why I think I might make a good professor someday.

I also did a study abroad. In 2015 I was in Paris and Nice for the French LBAT. The adventure launched me to a French minor. I made lasting friendships and learned to travel by myself.

During long weekends, I explored Europe. I traveled to Slovakia, where I learned how to manage in a place where I didn't speak the language and most people didn't speak English. I visited a friend in Denmark, where I had the most confusing dinner of my life, as the conversation rapidly shifted between Danish, French, and English.

I went with a group to Chamonix, to see largest glacier in France. For the first time, I stood at over 10,000 feet from sea level. I popped champagne by a pristine mountain lake and learned that every day is leg day in Chamonix.

In Nice, I stayed with a host family that spoke very little English. I learned how to communicate effectively in French.

Studying abroad was one of the most fun, scary, challenging, and incredible experiences of my life.

Go to class. Even if you’re late, getting half the lecture is better than none of it, and it’s easier to get back on track after one or two absences than after a month. It’s also good exercise in self-discipline and diligence.

Don't give up your dreams just because you failed at something the first time you tried it. College isn’t a race. Everyone will find their own path to their degree and their career.

Georgia Tech is notoriously difficult. There's no shame in dropping a class or even failing one and retaking it. If you remain focused on your goals and keep fighting to achieve them, you will be successful in the end.

I'm headed for graduate school, but where exactly is still up in the air. If I have to get a job for a few years and then apply again to Ph.D. programs, that's okay, too.

If I've learned anything at Georgia Tech, it’s tenacity and versatility. I know that even if I don't achieve my goals immediately, I am 100% capable of working hard enough to make it happen eventually. 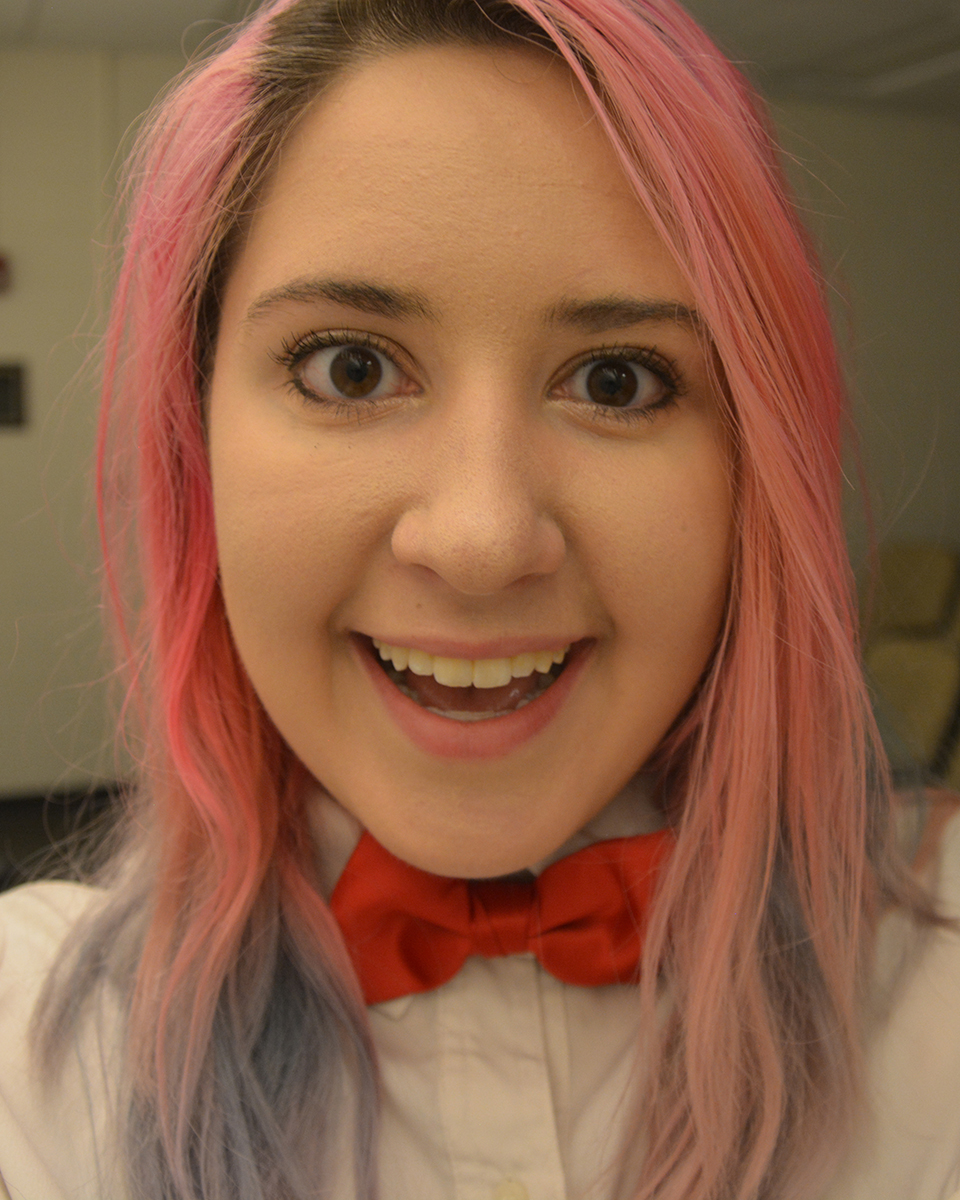