Impact of Warming on Peatlands

It is a fact that climate is changing, but how much and how fast are the subject of debate.

“Wetlands store a lot of the Earth’s soil carbon and have the potential to produce a lot of greenhouse gases from the soil,” says Max Kolton, a postdoctoral researcher in the School of Biological Sciences and lead author of the paper published recently in Frontiers of Microbiology. “They can act as important feedback to climate.”

“In order for society to decide how to respond to our changing climate, we need to know how these ecosystems will respond to environmental changes,” says Joel Kostka, corresponding author of the paper and professor in the Schools of Biological Sciences and of Earth and Atmospheric Sciences. “As it stands now, we do not have sufficient information to include microbes in climate models, even though they produce and consume a huge proportion of the greenhouse gases.”

The work is part of SPRUCE, which stands for Spruce and Peatland Responses Under Climate and Environmental Change. SPRUCE is administered by Oak Ridge National Laboratory, with which Kostka has a long-standing collaboration. The project involves using huge chambers to warm a whole wetland ecosystem, in Marcell Experimental Forest, in Minnesota. Researchers from all over the U.S. study various parts of the ecosystem: trees, shrubs, moss, lichens, insects, etc.

The recent work is part of the Georgia Tech team’s first SPRUCE project, which seeks to understand greenhouse gas production by microbes below ground, where the environment contains no oxygen. It was supported by the Office of Biological and Environmental Research, Terrestrial Ecosystem Science Program, under U.S. Department of Energy contracts DE-SC0007144 and DE-SC0012088.

“We show major changes in the soil microbial communities that produce greenhouse gases.  And we show that warming has a very different effect on the production of carbon dioxide."

Microbes are the great decomposers of ecosystems. They break down organic matter and recycle nutrients for plants. They also directly impact climate by producing and consuming greenhouse gases.

Peatlands store about one-third of all soil carbon as thick peat deposits. “The fear is that as Earth’s climate warms, microbial decomposition of soil organic matter will be stimulated, and much of the soil carbon in peatlands will be released as greenhouse gases,” Kostka says.

“Our research seeks to understand the mechanisms by which microbes produce greenhouse gases and to incorporate this information into climate models to predict how fast our climate is changing,” Kostka says. “We want to know how much gas will be produced, how fast, and what controls it as climate warms.”

Warming increases the release of both carbon dioxide and methane. But the ratio of methane to carbon dioxide produced from peatlands also increases with warming, the study shows. “This is worrisome,” Kolton says, because methane has a global warming potential that is 30 to 50 times that of carbon dioxide. “The production of more methane relative to carbon dioxide could accelerate climate change by acting as a positive feedback.”

The study also shows that soil microbial diversity decreases with warming. Diversity is critical to supporting ecosystem function. If diversity declines, the ecosystem services provided by microbes may go away.

Previous researchers have studied the impacts of warming on methane production in soils from various ecosystems. However, few studies have linked warming to the dynamics of specific microbial populations that produce methane in wetland soils. Likewise, few studies have looked at the impact of warming on carbon dioxide production, which is actually produced in much larger amounts by wetland soils.

“We show major changes in the soil microbial communities that produce greenhouse gases,” Kolton says. “And we show that warming has a very different effect on the production of carbon dioxide."

Next, Kostka’s team is studying the microbe-catalyzed mechanisms controlling greenhouse gas production to understand why and how the production of methane and carbon dioxide are different. The team suspects the existence of a new form of microbial respiration, because generally microbes need oxygen or some electron acceptor to breath when breaking down organic matter. “Peatland soils are generally anoxic and very low in mineral content,” Kostka says. “Therefore, we think that the microbes are actually breathing the organic matter itself.”

Beyond their role in climate change, wetlands are important for water quality and as habitat for wildlife, Kostka says. “I am passionate about the beauty and elegance of wetlands. I want people to know how important these places are and what services they provide to humans. Conservation and restoration of wetlands are critical.”

The work was supported by the Office of Biological and Environmental Research, Terrestrial Ecosystem Science Program, under United States DOE contracts DE-SC0007144 and DE-SC0012088. 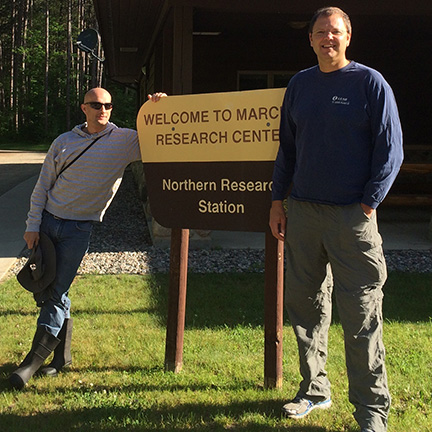 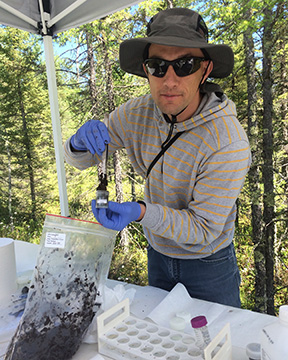