With the 50th anniversary of the Apollo 11 moon landing still fresh in everyone’s minds, NASA Administrator Jim Bridenstine this week came to Georgia Tech to get a status report on what the next generation of astronauts may take with them into space five years from now.

“We have to make sure we get this right, because quite frankly, if we’re going to land on the moon in 2024, we have to start now,” Bridenstine said during a July 31 tour of NASA-related research labs in the Daniel Guggenheim School of Aerospace Engineering and the School of Chemistry and Biochemistry.

“When you look at what Georgia Tech is doing with NASA, there’s a lot of not just research, but applications that Georgia Tech is developing,” Bridenstine said. He was referring to the studies underway in the REVEALS (Radiation Effects on Volatiles and Exploration of Asteroids and Lunar Surfaces) lab run by chemistry and physics professor Thomas Orlando.

REVEALS focuses on the physics and chemistry involved in how solar winds and micrometeorite impacts could help produce water – from molecular hydrogen and oxygen – for astronaut habitats on the Moon. The research also studies how the lunar regolith – the dirt, rocks, and other materials covering solid rock – could be harvested for building materials. REVEALS is also looking at the development of superdurable graphene-based composites for spacesuits, as well as how radiation detectors could be integrated into the suit materials to provide real-time readouts.

“These efforts will mitigate health risks,” Orlando said. “Bridenstine and Graves were able to see the prototype detectors, the polymers and [their] antistatic properties, as well as the novel table-top accelerator we will use to test these.  These efforts are very important to NASA's ARTEMIS program, which plans to sends humans to the Moon by 2024.”

Back to the Moon with ARTEMIS

The NASA delegation’s visit to Georgia Tech included presentations at the School of Aerospace Engineering, which showed off samples of its nanosatellites known as CubeSats. These are currently used in RANGE (Ranging and Nanosatellite Guidance Experiment) and TARGIT (Tethering and Ranging Mission of the Georgia Institute of Technology.)

A RANGE CubeSat successfully launched in December 2018, making it the first time a Georgia Tech-built satellite was placed in orbit. Georgia Tech aerospace engineering students were also involved in the July 2019 launch of Lightsail-2, a CubeSat containing a solar sail from the Planetary Society championed by noted science advocate Bill Nye.

“Georgia Tech is building some of the propulsion capabilities for some of the CubeSats that are going to be going around the Moon for ARTEMIS 1 [an unmanned flight set to launch in 2020]” Bridenstine said. “We have not been to the Moon with humans since 1972. We’re going back. The first mission will be uncrewed. It’ll be a crew-type vehicle but without crew.”

Bridenstine was impressed with what he saw. “All of those in situ resource utilization capabilities that are being developed here at Georgia Tech on behalf of NASA are amazing,” he said. Bridenstine held samples of the graphene-based materials being tested for future spacesuits and examined them while Phillip First, a professor in the School of Physics who is part of the REVEALS team, explained his research.

“When radiation goes through a material and creates some kind of defect, you detect it in most cases with luminescence in the material.” First said. “We want an electrical readout, so that you can dynamically monitor exactly the amount of radiation exposure.”

“REVEALS is part of the Center for Space Technology and Research, which was started eight years ago with the intention of contributing significantly to future long-term efforts in space science and technology,” Orlando said. “The efforts in REVEALS and HOME have been, and will continue to be, the cornerstone of Georgia Tech’s efforts in human flight and human exploration of destinations such as the Moon and Mars.”

At the REVEALS portion of the tour, Orlando told Bridenstine that the research had attracted more students to the Institute. “They would not have come to Georgia Tech unless we had this program,” he said. “Georgia Tech already has a very strong program, but this has been a real magnet for bringing in people who are interested in space exploration.”

Some of Orlando’s students participated in the presentations, and that also impressed Bridenstine.

“The best thing about all of this is that Georgia Tech is embedding its students into these projects,” he said. “NASA turns to Georgia Tech is do these projects, but the most valuable thing is that the students are getting hands-on exposure to these capabilities. They’re not just learning chemistry, calculus, physics, and all of the mathematics that are necessary. They’re also applying that in real time to very real projects that are critically important to NASA, so that when they graduate, ultimately they’re ready to go to work.

“We’re thrilled with the partnership – the relationship between NASA and Georgia Tech – and we’re looking forward to it continuing for a long time.” 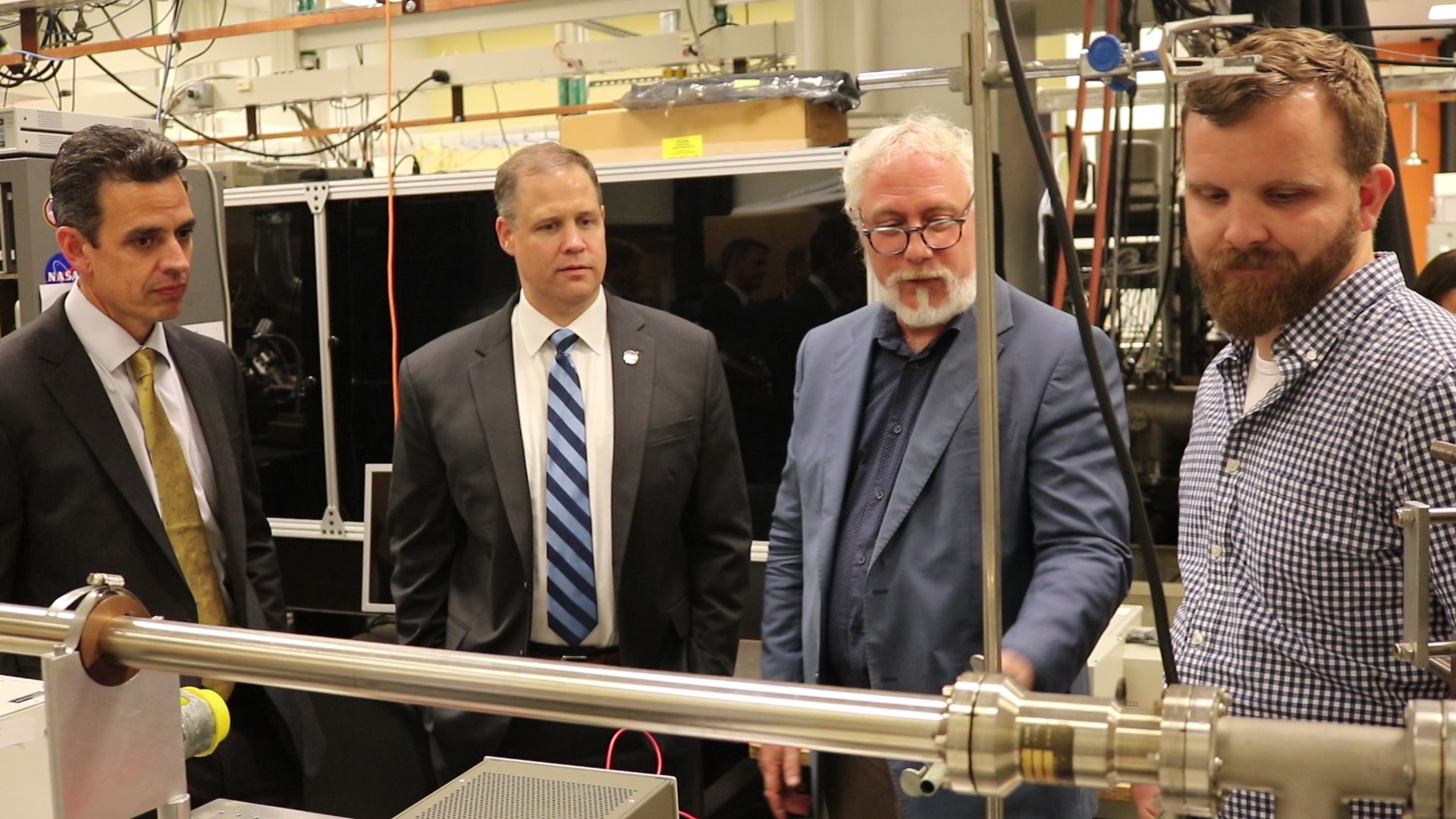 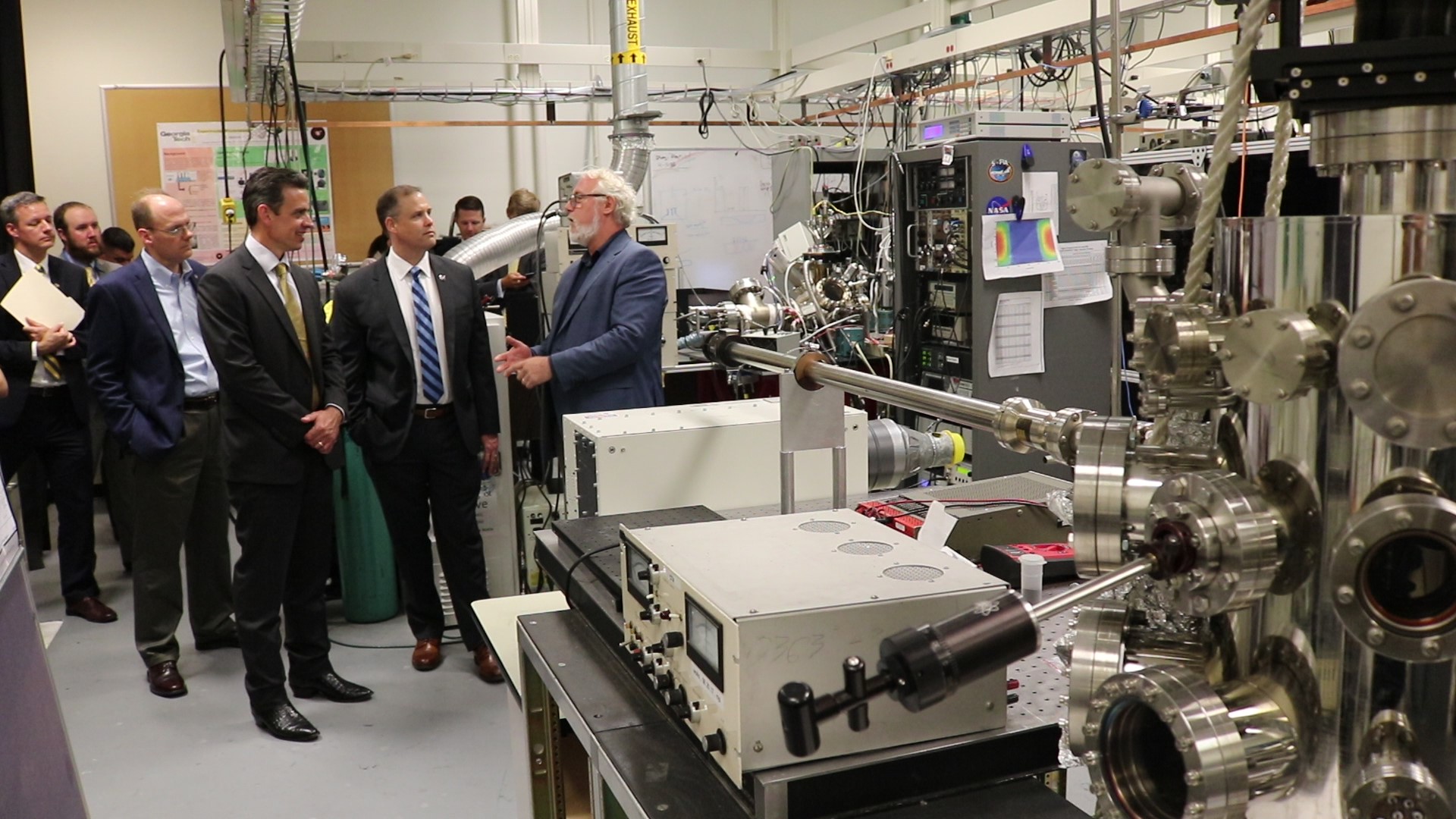