This story originally appeared on AJC.

By Raisa Habersham, The Atlanta Journal-Constitution

On a typical, smoldering hot Atlanta day sans a pandemic, drivers are sitting in the infamous metro traffic anxiously waiting to arrive at their destination — it’s a wait that brings smog and poor air quality.

But in recent weeks, Atlanta’s air quality has measurably improved – a trend attributed to the coronavirus pandemic, which forced many inside their homes to wait for the outbreak to slow.

Historically, Atlanta has ranked among the most congested cities in America, but the state’s order closing non-essential businesses and public places changed that. “We saw traffic pretty much go from terrible to nonexistent in a week or two after the shelter-in-place order,” WSB Skycopter anchor Doug Turnbull said.

Turnbull said at the height of the shutdown there were 40% to 50% fewer cars on road compared to a year ago in April 2019. In recent weeks, he’s seen a slight uptick as Gov. Brian Kemp has eased restrictions.

With so few cars on the roads, Atlanta has had only one smog alert for the year and has maintained good air quality, according to AirGeorgia.org. Last year, Atlanta had three smog alerts through June 10, and 18 for the entire season from April 1 to Oct. 31, according to the Georgia Department of Natural Resources.

Since the pandemic, particle pollution in Atlanta has been well below the 2017 to 2019 average, according to raw data from Georgia Department of Natural Resources. Particle pollution, or particulate matter, is a mixture of solid and liquid droplets suspended in the air, small enough to be inhaled and cause lung damage.

Since April, researchers at Georgia Tech have been studying how fewer cars on Atlanta’s streets has affected the air quality in Midtown.

“The pandemic is devastating in many ways and levels but from the air quality perspective, the shutdown is a valuable experiment on how fewer emissions will affect the overall air quality,” said Nga Lee “Sally” Ng, associate professor at Georgia Tech’s School of Chemical & Biomolecular Engineering and School of Earth & Atmospheric Sciences.

Ng’s team set up a measurement station on the roof of the department’s building on the Midtown campus to measure the city’s air quality. Since April, the team has seen a decrease in nitrogen dioxide levels, consistent with the decrease in cars on the roads.

Traffic has already begun to return as restrictions have been gradually lifted. Ng said they’ve captured the early part of Georgia’s reopening, but are still doing measurements to detect when the pollution begins to climb again. “We hope to measure until the Midtown area reopens so we can capture the air quality change.” 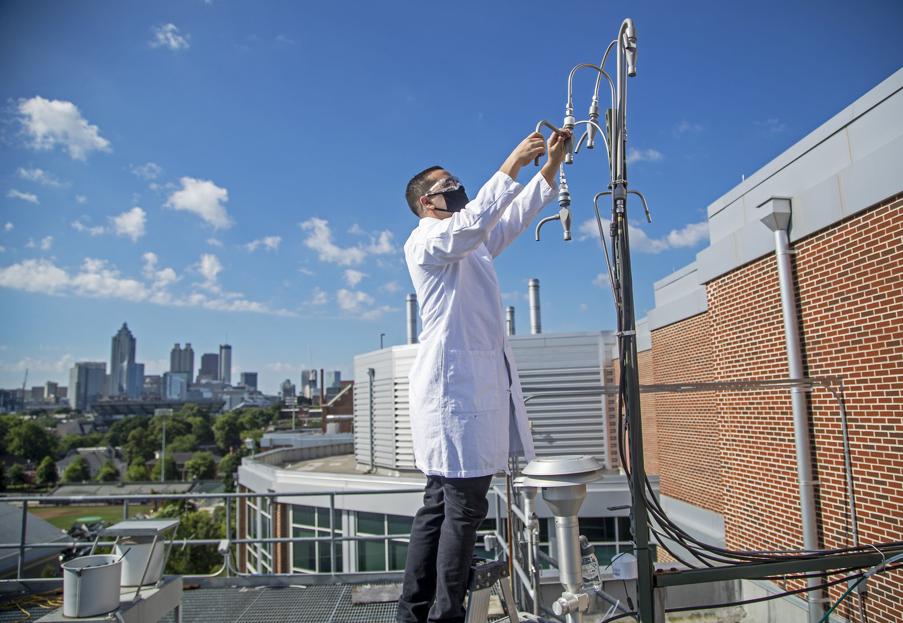