Solid materials have all kinds of qualities, but not all of them are completely understood by scientists. Thoroughly analyzing some of the more complex and scientifically interesting things that materials can accomplish, such as superconductivity and magnetism, require going to the sub-atomic, or quantum level, and examining the dense gas of electrons holding the atoms together.

Colin Parker, an assistant professor in the School of Physics, proposes a quantum simulator, a method of reproducing systems that are hard to do in a laboratory, and can’t be done with a supercomputer. “We are trying to simulate situations that arise in quantum systems of interest, usually materials, using another quantum system, which is our laser-cooled atoms,” Parker says.

That idea has recently resulted in a National Science Foundation (NSF) CAREER Award, a grant presented to early and mid-career scientists. Parker’s proposal, “A Versatile Quantum Simulator for Fermionic Ordering”, will be funded by the NSF for five years.

Lithium, lasers, and the physics of fermions

“Fermionic” refers to fermions, one of two types of fundamental objects in quantum physics, the other being bosons. The most commonly encountered fermion is the electron, “and the system we’d most like to understand is systems of electrons moving in solid crystals and displaying interesting properties – for example superconductivity, magnetism, or something called charge density wave, where material clumps its charge together instead of being uniform and electrically neutral,” Parker says. “Since the electrons are fermions, we need to use atoms that are also fermions to do the simulations.”

That is the reason Parker and his research team use a particular isotope of lithium in their work. The fermion structure of a lithium-6 atom is the perfect example; it has to have an odd number of fermions (bosons have an even number.)  A lithium-6 atom has 3 neutrons, 3 protons, and 3 electrons, adding up to 9.

“The hard part is that to get a similar state as a material at room temperature, we have to cool to within one-millionth of the degree above absolute zero,” Parker says. “Fortunately, this is in fact possible using lasers, primarily by a method called Doppler cooling.”

Lasers may conjure science fiction-style images of red-hot beams of light cutting through steel and melting other materials, but certain sections of the light spectrum can affect atoms in other ways that provide the type of functions Parker and his team are seeking.

“Students will use one set of lasers to slow the atoms down to achieve the cooling, and another set of lasers to pin them in place,” Parker writes in the NSF CAREER abstract. “Critical to this award, scientists, including the awardee, have developed a technique to shake the pinned atoms, which coerces them into emulating a much larger range of materials than previously possible.”

The advantage gained by using the simulator, rather than real material, is that all of the parameters are continuously tunable. “In real materials, there’s maybe a few chemical substitutions you can make, but otherwise you have to work with what nature allows,” Parker says. “We can vary continuously between different conditions, and even do this in the middle of an experiment.”

That could eventually lead to applications where the materials themselves could be tunable – as in, given new functions by scientists.

“The better we can understand material properties from the ground up (sometimes called first principles), the better we can design and predict new materials with more desirable properties,” Parker says. “There is also a possibility, one day in the future, to use the kind of simulators I am building for other kinds of simulations beyond materials, perhaps to understand the earlier universe, neutron star cores, or certain molecules in chemistry.”

Another aspect of Parker’s NSF CAREER Award that has implications for the future is the educational component: In addition to training graduate students, the award will support high school students and teachers from the Atlanta area to work in the lab over the summer on mechanical and electronic automation tools to increase lab productivity. “The skills and knowledge of state-of-the-art laboratory set-up acquired will then be used to develop similar tools for the high school physics lab,” Parker says.

Henry (Pete) LaPierre, assistant professor in the School of Chemistry and Biochemistry, has also just received an NSF CAREER Award. Look for the forthcoming abstract and story on that research to be shared this summer.

See our other major FY20 grants here, including NSF CAREER Award announcements and stories for Jenny McGuire (School of Earth and Atmospheric Sciences/School of Biological Sciences) and Lutz Warnke (School of Mathematics).

A closeup of the magnetic optical trap (MOT) in Colin Parker's quantum simulator. The glowing spot in the image center is the fluorescence from about 1 billion atoms cooled to less than a 1/1000 of a degree above absolute zero. (Photo Colin Parker) 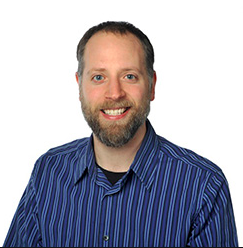