Students major in the College of Sciences because they’re curious about the natural world. They want to know why things are the way they are. They want to solve problems, to explain the mysteries of the universe, and to use science and technology to better people’s lives.

At the end of the Spring 2018 semester, 11 of those students received awards for outstanding achievements.

“We take great pleasure in recognizing and nurturing the outstanding, well-rounded students in our care,” says College of Sciences Dean and Sutherland Chair Paul M. Goldbart. “They are the reason we are constantly striving to strengthen and diversify the educational experiences and research opportunities that we offer.”

“I cannot say a more heartfelt thank you to the benefactors of these awards and scholarships,” Goldbart says.  “Their generosity marvelously expands our ability to support deserving students and retain them in the College.”

This award recognizes undergraduates who are committed to research. Ann Johnson, a biology major, and Calvin Runnels, a biochemistry major, are the 2018 recipients in the College of Sciences.

Johnson is passionate about changing global health and interested in engineering for the developing world. She has conducted research with Joe Brown,  in the School of Civil and Environmental Engineering, with Omer Inan, in the School of Electrical and Computer Engineering, and at Johns Hopkins University. “It’s so important to intersect an understanding of humanities and science in order to look at culture and how it impacts people,” Johnson says.

The intersection of science and people also fascinates Runnels. He conceived and implemented the Undergraduate Research Fair to connect labs with students. He tirelessly advocated for marginalized and LGBTQ students.

Runnels conducted research on the origins of protein folding in the lab of Loren Williams, in the School of Chemistry and Biochemistry. His work yielded a yet-unpublished manuscript about the nature of biopolymers of which he is the first author

Runnels graduated in May 2018 and is headed to Oxford University as a Rhodes Scholar. According to one professor, Runnels is “a once-in-a-decade student” who displays empathy as well as a command of science.

The award focuses on students just getting started in research. The award seeks to early involvement and broaden the recipient’s participation in research. Keith Creech, a biochemistry major, is the 2018 recipient. He will begin research with Robert Dickson, in the School of Chemistry and Biochemistry, in summer 2019.

The scholarship honors the top junior in the College of Sciences. Sara Brockmeier is the 2018 recipient. Brockmeier majors in psychology with a business option.

Brockmeier conducts research in the joint lab of Phillip Ackerman and Ruth Kanfer, also called the PARK Lab, in the School of Psychology. She studies the influence of factors affecting workplace learning, behavior, and performance. She helped pilot a study of test-retest reliability aptitude tests used by the U.S. Navy.

Brockmeier hopes to apply her research to a career in industrial and organizational psychology.

Joel Mumma, a psychology Ph.D. student, also hopes to use psychology to improve people’s lives. Winning this award, he’s doing a bit more than hoping. Mumma has written a paper that will save lives, according to his advisor, Frank Durso.

Mumma led the risk analyses of protocols that health care providers follow to protect themselves from dangerous pathogens, such as Ebola. The paper, in Clinical Infectious Diseases, is filled with “a number of nuanced and surprising findings that tell us a little more about the psychology of human error,” Durso says. Hospitals are already putting to the results to practice. This paper, Durso adds, is just the beginning for this “rising star.”

Jennifer Pentz is a biology Ph.D. student. Using yeast cells, she studies the origins of multicellularity with William Ratcliff, in the School of Biological Sciences. It was during her undergraduate research at the University of Minnesota that Pentz discovered an interest in ecological and evolutionary questions.

At Tech, Pentz co-authored a study finding that physical stress may have been critical in the rise of multicellular organisms from single cells. Her work with yeast brought her to the Atlanta Science Festival, where she demonstrated the “Science of Beer”.

Daniel Gurevich is the 2018 winner. The award recognizes excellence at the interface of mathematics and physics.

No stranger to solving real-world problems, Gurevich is interested in data analysis. An algorithm he developed has helped discover new mechanisms for ventricular fibrillation. This heart disorder is fatal within minutes if not treated.  He also wants to be able to predict when patients in intensive care units might crash based on their vital signs.

An author of two research papers, Gurevich is triple majoring in physics, mathematics, and industrial and systems engineering. This broad perspective gives him an edge. He says it helps him find patterns in data.

Perhaps his love for problem solving comes from chess. He started playing at age five, and now he’s an International Master.

Being able to study more than one field – and to synthesize them – is an extraordinary skill. This award recognizes students studying at the interface of physics or mathematics with biology.

Deep curiosity about the foundations of life also drives Nancy Park, the 2018 recipient. The scholarship goes to a top pre-health junior in the College of Sciences. Park is majoring in biology with a minor in physiology and a pre-health designation.

Park is a Fast-Track to Research Scholar and the president of Student Hospital Connections. She conducts research with Terry Snell, in the School of Biological Sciences.

“She really enjoys experimentation and discovery, and is constantly thinking of ways to improve techniques,” Snell says of Park. In Snell’s lab, Park has studied the sequencing of DNA from various rotifers and the metal toxicity to Proales similis.

This award recognizes the top out-of-state junior in the College of Sciences. The 2018 recipient is Katherine Wei. The biology major and health and medical sciences minor hopes to be a dentist.

In Todd Streelman’s lab, Wei studies the cichlid fish genome to explore the divergence of behavioral genes. Wei has had an integral role in advancing the understanding the genetic mechanisms of sex determination, a mentor says.

According to another mentor, Wei “only seems to express excitement as she dives into- and solves- new challenges and always has a positive impact on her projects and those around her.”

Wei serves as vice president of membership of the Pre-Dental Society and Stamps Health Services ambassador.

When it comes to solving challenges, Libby Taylor excels. She’s the 2018 recipient of the scholarship, which recognizes a top graduating senior in the College of Sciences. Taylor has already won the Alice T. Schafer Mathematics Prize, a prestigious nationwide award.

One of Taylor’s first challenges was taking Georgia Tech classes while still in high school. As an undergraduate, she went on to take several graduate level classes.

Taylor conducted research in combinatorics, tropical geometry, matroid theory, and random graph theory. According to her professors, when she came upon a foreign concept, she learned it on her own. One professor is “amazed at her ability to quickly pick up sophisticated ideas.” Another looks “forward to seeing what Taylor’s future holds.” 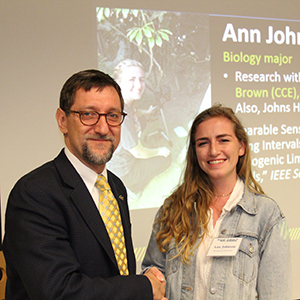 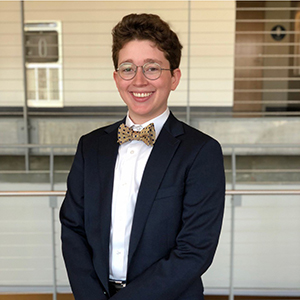 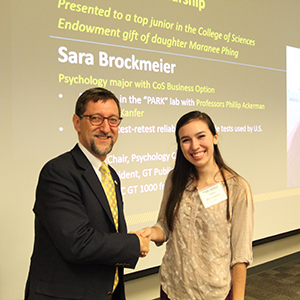 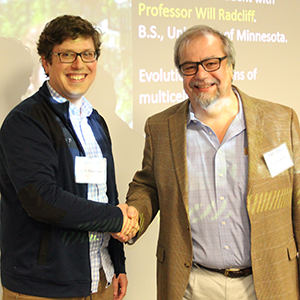 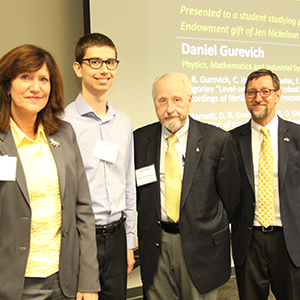 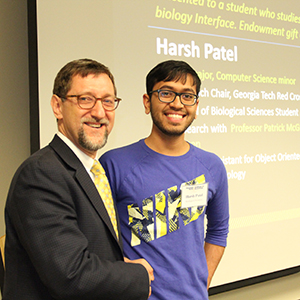 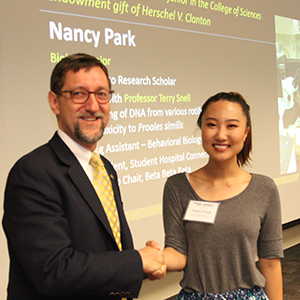 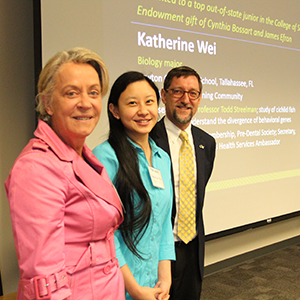 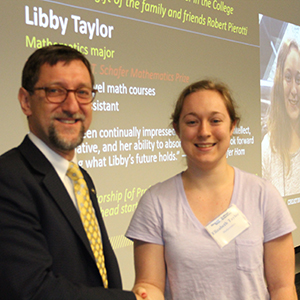