From end to end, the human genome is about two meters long; yet it can pack to a length that’s about 1/15th the width of a human hair. That six-orders-of-magnitude compaction is accomplished by DNA molecules wrapping tightly around proteins called histones. Furthermore, tight DNA loops play important roles in gene regulation.

The physics behind these sharp windings is not fully understood. Researchers believe that bendability of nucleic acid sequences is an important mechanical part of the process. Intuitively, researchers think that rigid sequences would not readily bend around the protein, because of the tight curves they would need to form. Conversely, flexible sequences would have more propensity to wind sharply.

For now, researchers don’t really know what sequences can form loops easily or not. But they can make relative comparisons based on the behavior of short sequences with “sticky” ends, which form a loop when they meet.

“While most researchers focus on the looping part, we became interested in the unlooping,” says Harold Kim, an associate professor in the School of Physics and member of the Parker H. Petit Institute of Bioengineering and Bioscience. “We thought unlooping is more closely related to the force exerted by the distorted DNA, just like the restoring force by a spring.”

“By looking into a reaction step that was deemed trivial, we stumbled upon these counterintuitive results.”

A recent study of short DNA sequences by Kim and former graduate student Jiyoun Jeong, however, yielded puzzling results. Published last month in Physical Review Letters, the findings could pave the way to properly identifying the sequence dependence of rigidity and flexibility in DNA.

The conventional wisdom is rigid DNA will have trouble looping and, once looped, will rapidly unloop. Conversely, flexible DNA will rapidly loop and slowly unloop. That is, looping and unlooping rates would be inversely correlated.

But when Jeong and Kim measured the looping and unlooping rates of various short DNA sequences, the results surprised them. What they found was a direct correlation: the longer it takes to loop, the longer it also takes to unloop.

Imagine you have a flexible rod and you try to form a loop. When the ends meet, you’ll have a loop that looks like an inverted teardrop: round at the top and pointed at the bottom, where the ends are joined. If this shape were the final form, looping and unlooping rates would be inversely correlated.

However, DNA is more than just a flexible rod. It is also a stack of base pairs, and stacked base pairs are preferred because the arrangement yields strong attractive interactions. According to Kim, the inverted-teardrop loop can transform into a circle by stacking the base pairs at the sticky ends. Although in this shape the bending stress at the joint increases, the loop doesn’t open easily because it is more stable.

Now imagine putting a flexible segment in the middle of a sequence that alone would have looped slowly. Like a hinge, the flexible segment hastens looping. When looped, the ends can stack to form a teardrop shape, with a sharply pointed top and a rounded bottom at the joint. The stacking, however, is less likely to hold because the teardrop loop requires an even higher bending stress at the joint than the circular loop. With less likelihood of stacking, the loop breaks faster.

In another experiment, they designed a loop geometry where the sticky ends cannot be stacked. Consistent with the stacking model, looping and unlooping rates were inversely correlated.

“By looking into a reaction step that was deemed trivial, we stumbled upon these counterintuitive results,” Kim says. “Now we have the toolkit to measure the stress resistances of different base pair stacks.”

The work was supported by National Institutes of Health Grant R01GM112882 and National Science Foundation Grant 1517507. 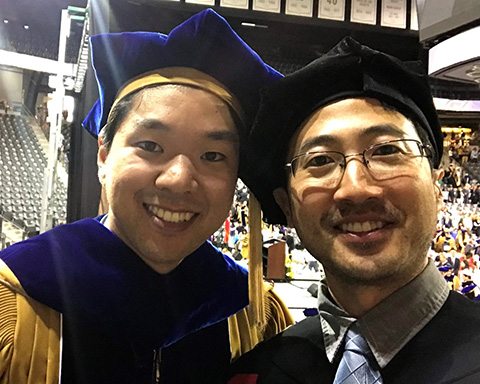 Jiyoun Jeong (left) and Harold Kim at May 2019 graduation