Urging early action to protect against the impacts of climate change

Kim Cobb testified today before the House of Representatives' Natural Resources Committee hearing on climate change. She urges early action to counter the devastating impacts of climate change. Cobb is a professor in the School of Earth and Atmospheric Sciences and the director of the Georgia Tech Global Change Program.

Following is the full text of Cobb's prepared oral testimony.

"I thank Chairman Grijalva and the rest of the Committee for allowing me to contribute to this important conversation about our nation’s climate future. My message today is simple: there are many no-regrets, win-win actions to reduce the growing costs of climate change, but we’re going to have to come together to form new alliances, in our home communities, across our states, and yes, even in Washington. I know I speak for thousands of my colleagues when I say that scientists all over the country are willing and eager to assist policymakers in the design of data- driven defenses against both current and future climate impacts.

"As a Professor at the Georgia Institute of Technology for the last 15 years, I have published over 60 peer-reviewed articles, been awarded a Presidential Early Career Award for Scientists and Engineers, and am currently a Lead Author for the Sixth Assessment Report of the Intergovernmental Panel on Climate Change.

"In my lab, we study past climate variations using samples that we collect on remote Pacific islands. I love my work. But three years ago, I witnessed something that would change my life forever.

"In 2015, we received funding from the National Science Foundation for a series of field expeditions to document the evolution of a strong El Niño event projected that winter. I had waited 15 years for this opportunity. However, little did I know that ocean temperatures 6 degrees Fahrenheit warmer than usual would kill up to 90% of the coral at our study site. And I had a front-row seat to the carnage. 2016 would go on to become the worst global-scale coral bleaching and mortality event on record. Personally, 2016 was my wakeup call.

"Unfortunately, 2017 and 2018 brought a number of devastating wake-up calls much closer to home. Hurricanes Harvey, Lane, and Florence delivered record-breaking rainfall while Hurricanes Maria and Michael decimated entire communities with their force, including many in my home state of Georgia. The National Climate Assessment – released this last November – documents how climate change loads the dice in favor of extreme precipitation events, and how warmer oceans fuel larger tropical storms. On the other side of the country, record-breaking wildfires raged across California, linked to prolonged drought and warmer temperatures. The economic toll of these disasters can be measured in the hundreds of billions of dollars. However, their real toll - the vast human suffering left in their wake - is immeasurable.

"And beyond these deadly extremes, a host of additional climate change impacts represent a growing threat to ecosystems and communities alike. Sea levels are rising, with up to 6ft of global sea level rise projected this century. Drought threatens water supplies across the western US, with no end in sight. The oceans are becoming more acidic as excess atmospheric carbon dioxide reacts with seawater.

"Climate change impacts are now detectable all across America. And they will get worse. That’s the bad news. I’m sure you’re ready for some good news, and there is plenty to go around.

"The good news is that science can help inform measures to protect communities, as well as our oceans, forests, parks, waterways, and wildlife, from the most devastating impacts of climate change. Here, early action is essential to the success of these approaches, delivering vast returns on investment.

"Many jurisdictions – from the local to the federal level - have developed a range of climate adaptation measures informed by rigorous science, stakeholder engagement, and cost-benefit analyses. Towards that end, The National Climate Assessment provides an actionable blueprint for such adaptive measures, including an in-depth analysis of climate impacts on ecosystem structure, function, and services.

"The other good news is that it’s not too late to avoid the most damaging impacts of future climate change. We have the tools we need to dramatically reduce greenhouse gas emissions. And in doing so, we will enjoy cleaner water, cleaner air, and healthier communities.

"The rapid expansion of renewable energy across the nation demonstrates a strong appetite for carbon-free, clean power on the part of private homeowners and large utilities alike. Even so, US greenhouse gas emissions were up 3% last year. The bottom line is that we are running out of time. Comprehensive federal policies are needed to speed the transition to low-carbon energy sources. Top on the list must be a price on carbon, to reflect the true costs of continued fossil fuel emissions, and to incentivize consumers, companies, and the market to find the cheapest, most effective means of reducing emissions. With or without a price on carbon, increased energy efficiency is a win-win strategy that can deliver energy cost savings, while reducing harmful air pollution.

"Listening to the stories of those whose lives have already been destroyed by climate change I have to wonder: How bad will it have to get for us to recognize that climate change represents a clear and present threat, and to act decisively to protect ourselves and the natural resources that we all depend on?

"As a climate scientist, I’m heartened by recent polls showing that nearly 3 in 4 Americans are concerned about global warming, and support a range of policy options to address it.

"And as a mother to four young children, I’m heartened by the sea of young people demanding that we not squander their chances for climate stability.

"I urge this committee to center the robust findings of climate science in making critical policy decisions about our nation’s natural resources by: 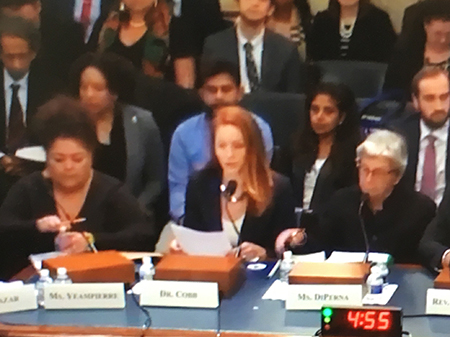 Kim Cobb before House Committee on Natural Resources on Feb. 6, 2019