Laura Cadonati has been selected to receive the 2018 Outstanding Faculty Research Author Award. Cadonati is a professor in the School of Physics and a member of the Center for Relativistic Astrophysics. Georgia Tech presents the award to faculty who most contributed to highly impactful publications describing the results of research conducted at Georgia Tech and published during the period January 1, 2013, to December 31, 2017.

The award recognizes Cadonati for her contributions in gravitational-wave astronomy as a member of the LIGO Scientific Collaboration (LSC), consisting of the hundreds of scientists working with the Laser Interferometry Gravitational-Wave Observatory (LIGO) in Livingston, Louisiana, and Hanford, Washington.

Three of Cadonati’s publications, with the LSC, in Physical Review Letters and Astrophysical Journal Letters helped usher the era of multi-messenger gravitational-wave astronomy. The papers chronicled the first detection of a gravitational wave produced by the merger of black holes in 2015. About 18 months later, LIGO detected a gravitational wave from the merger of neutron stars for the first time. This detection came with a plethora of astronomic observations of the electromagnetic radiation also generated by the cosmic cataclysm.

Albert Einstein’s 1915 general theory of relativity predicted the existence of gravitational waves, which are ripples in the fabric of spacetime due to cataclysmic events in the distant universe. The waves would be so tiny by the time they reached Earth that Einstein himself thought they would never be detected.

LIGO detected one of the elusive waves for the first time on Sept. 14, 2015, which came from the collision of two massive black holes.

On Aug. 17, 2017, LIGO detected for the first time a gravitational wave from the merger of two neutron stars. Neutron stars are the densest stellar objects; a teaspoonful of neutron star material would weigh more than a billion tons. They comprise the collapsed core left behind by exploding stars that were 10-20 times the size of our sun.

“The future of astrophysics is now one in which gravitational waves, electromagnetic waves, and neutrinos will together provide a new, multisensory experience of the universe.”

Extremely bright and energetic explosions called gamma ray bursts are believed to accompany the merger of neutron stars. This idea remained untested until LIGO detected the gravitational wave from the collision of two neutron stars.

This event was so powerful that it lit up the sky in many electromagnetic wavelengths, from gamma rays to radio. Scores of astronomers from around the world, looking at data from 70 telescopes and satellites, proved that the neutron star merger also powered a kilonova – the radiation from rapid neutron capture processes that leads to formation of heavy elements, like gold, platinum, and lead.

Cadonati was at the core of these successful endeavors, previously as the data analysis lead for LIGO and now as deputy spokesperson for LSC. In just two years, the three papers have taken the fundamental physics field of gravitation into the new era of multi-messenger gravitational-wave astronomy.

“I am humbled by Georgia Tech’s recognition of my role in the publication of LIGO’s results and of the impact that this work has on astrophysics,” Cadonati says. “The future of astrophysics is now one in which gravitational waves, electromagnetic waves, and neutrinos will together provide a new, multisensory experience of the universe, and the only way it can succeed is by the collaborative effort of the physics and astronomy community.

“I am grateful for the support of my Georgia Tech colleagues, postdocs, and students, who joined me in this adventure of the past two years, and I look forward to the things we will learn about the universe in the years to come.” 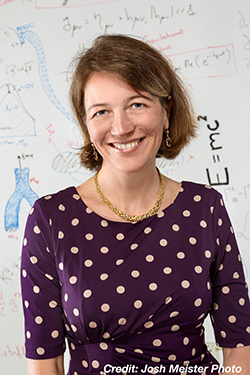