This story about Jordan McKaig, PhD student in the School of Earth and Atmospheric Sciences, initially appeared on the website of NASA Science: Solar System Exploration.

What first sparked your interest in space and science?

I was a really inquisitive child. My biggest fascinations were space and nature – I loved to pore over books about the planets, launch model rockets, stargaze through a little plastic telescope, and explore the forest and ponds near my house, searching for butterflies, frogs, and interesting-looking plants. By the time I started college, I had planned to major in biology and international studies; however, during my freshman year I stumbled across the field of astrobiology. Astrobiology combines the study of life’s origin, distribution, and future in the cosmos with space biology, which focuses on how biological systems function in response to altered gravity, radiation, and other spaceflight conditions. I was immediately hooked and began searching for ways that I could fit into the space program.

How did you end up working in the space program?

I participated in the Space Life Sciences Training Program (SLSTP) at NASA’s Ames Research Center for two summers as an undergraduate student. I first joined the Aerobiology Lab as an intern, working on projects studying how microbes survive and respond to various spaceflight and stratospheric conditions. The next summer, I returned as a program coordinator, balancing research with the logistical aspects of the program. Being a part of SLSTP changed my life — the people I met, research experiences I gained, and things I learned through SLSTP have drastically influenced my trajectory in the time since. I am pursuing my doctorate at Georgia Tech, and I am so excited to continue participating in research seeking to understand life on Earth and its place in the universe.

Tell us about your job. What do you do?

I have worked on a variety of projects relevant to astrobiology and space biosciences through the Aerobiology Lab. A common theme of my research has been how microbes from Earth survive and change in space and planetary environments. As we explore the solar system, we inevitably bring our microbes along with our rovers, probes, and astronauts; it is important to know how these microbes change in space and whether they can potentially survive on the surfaces of other planets! In interplanetary exploration, one major scientific goal is to look for signs of life, so we want to make sure we don’t compromise these efforts with contamination from Earth. The Aerobiology Lab studies how terrestrial microbes could potentially survive on the surface of Mars by exposing them to Earth’s stratosphere, where UV radiation, dryness, temperature, and pressure conditions are similar to what they would experience on Mars’ surface. Another project that I worked on studied genetic changes in bacteria that flew on the International Space Station. Living things can change their gene activity based on the environmental conditions they're exposed to, and we were interested in investigating how the spaceflight environment impacts this expression.

What's one piece of advice you would give to others interested in a similar career?

Don’t be afraid to reach out to people or ask whether you can participate in an opportunity. Even if the answer is probably a no, the occasional yes can lead to career-changing opportunities. Also, there are so many different ways to get involved with working on space-related projects – it’s really not just rocket science! Space exploration is a collaborative, interdisciplinary environment, and it requires a wide variety of expertise.

My family has long impressed upon me the value of hard work and has always encouraged me to follow my dreams. My friends are so passionate about the topics that interest them, and I love to learn and have fun alongside them. I have had many inspirational mentors and teachers over the years who have passed along their wisdom and expertise, and I am very grateful for that. I am constantly inspired by all these people and feel very lucky to have them in my life! I also enjoy reading astronaut autobiographies, especially their spaceflight experiences. When viewing Earth from space, astronauts frequently experience a phenomenon called the “overview effect,” which a powerful realization of how precious and fragile our world is by seeing it as a single planet in the void of space. Many astronauts report feeling a great connectedness with the human race, as well as a great responsibility to protect our biosphere. I really love this perspective – space exploration constantly pushes the boundaries of what is possible. This, in turn, can both expand our knowledge of the universe and our place within it, as well as encourage us to actively think about the sustainability and ethics of our actions.

What have been some of your favorite projects to work on?

My favorite project occurred during my first year participating in SLSTP at Ames. The intern group I was a part of developed a high-altitude balloon project with the goal of studying whether microorganisms could be lofted into the atmosphere by wildfire smoke. It was a really memorable experience, especially the balloon launches. Once the balloon from the first launch was airborne, we began chasing it – driving across California, using a radio-based tracker to monitor its position and speed in real time, and adjusting our course accordingly. When it landed, we had an approximate idea of its location in a forest near Lake Tahoe. We hiked into the dense forest and eventually found it – 100 feet off the ground, caught in the branches of a redwood tree. Since we were unable to obtain data from this balloon (until a few months later, when some friendly forest service rangers shot it out of the tree with an air gun), we did the whole thing again the next weekend, building a second balloon for another launch and chasing it across the state. The whole project was such a fun adventure, and I never thought something like it would be a part of my time at NASA!

What are some fun facts about yourself?

I love to travel every chance I get. Some of my favorite destinations have included France, where I studied abroad for a summer; Russia, where I attended a Venus exploration workshop; and Costa Rica, where I hiked in the rainforest and learned to surf. I also recently learned to scuba dive!

What is your favorite space image and why?

The Pale Blue Dot is a photograph of Earth taken Feb. 14, 1990, by NASA’s Voyager 1 at a distance of 3.7 billion miles (6 billion kilometers) from the Sun. The image inspired the title of scientist Carl Sagan's book, "Pale Blue Dot: A Vision of the Human Future in Space," in which he wrote: "Look again at that dot. That's here. That's home. That's us." Credit: NASA/JPL-Caltech

I love the “Pale Blue Dot” image taken by Voyager 1. Here on Earth, we can see planets like Venus, Mars, Jupiter, and Saturn in our own night sky. With the naked eye, we can only discern the most basic details: a planet’s location and movements relative to our own, maybe its color, and how bright it is. With the help of telescopes, space probes, and other brilliant feats of science and engineering, we have discovered so many incredible details about these planets. Many of them have beautiful rings and moons. Their surfaces and atmospheres are all extremely different from anything here on Earth. Some of these worlds may even be capable of supporting life! Similarly, by looking at Earth from the fringe of our solar system, one would never be able to tell what sorts of planetary features or life forms are present on our own planet. This image serves as a powerful reminder that there is so much out there to explore and that many of these avenues for future exploration are not even on our radar yet. Space might be the “final frontier,” but it’s the most expansive and formidable frontier that humankind has ever encountered. 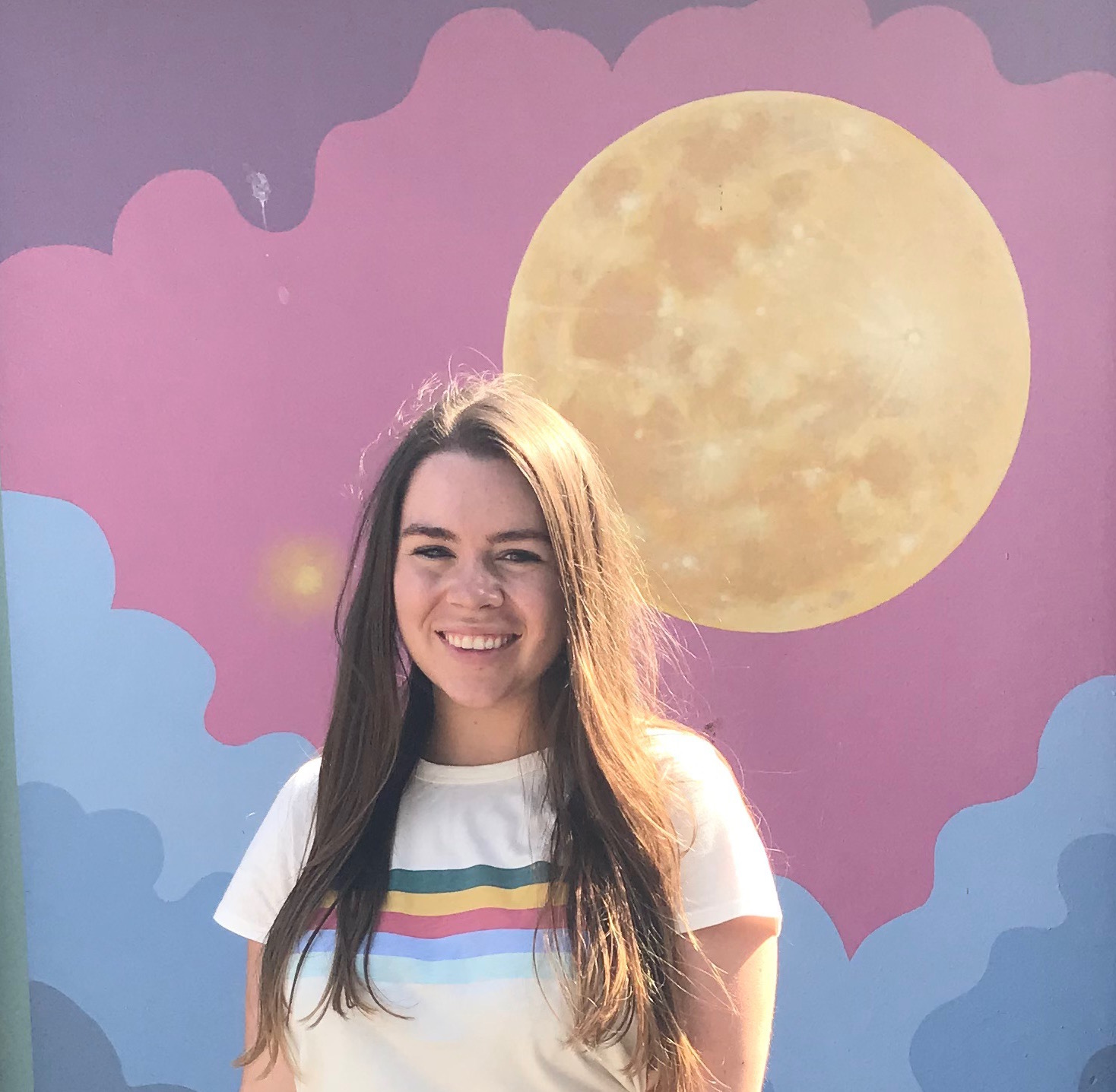 Jordan McKaig, PhD student in the School of Earth and Atmospheric Sciences. 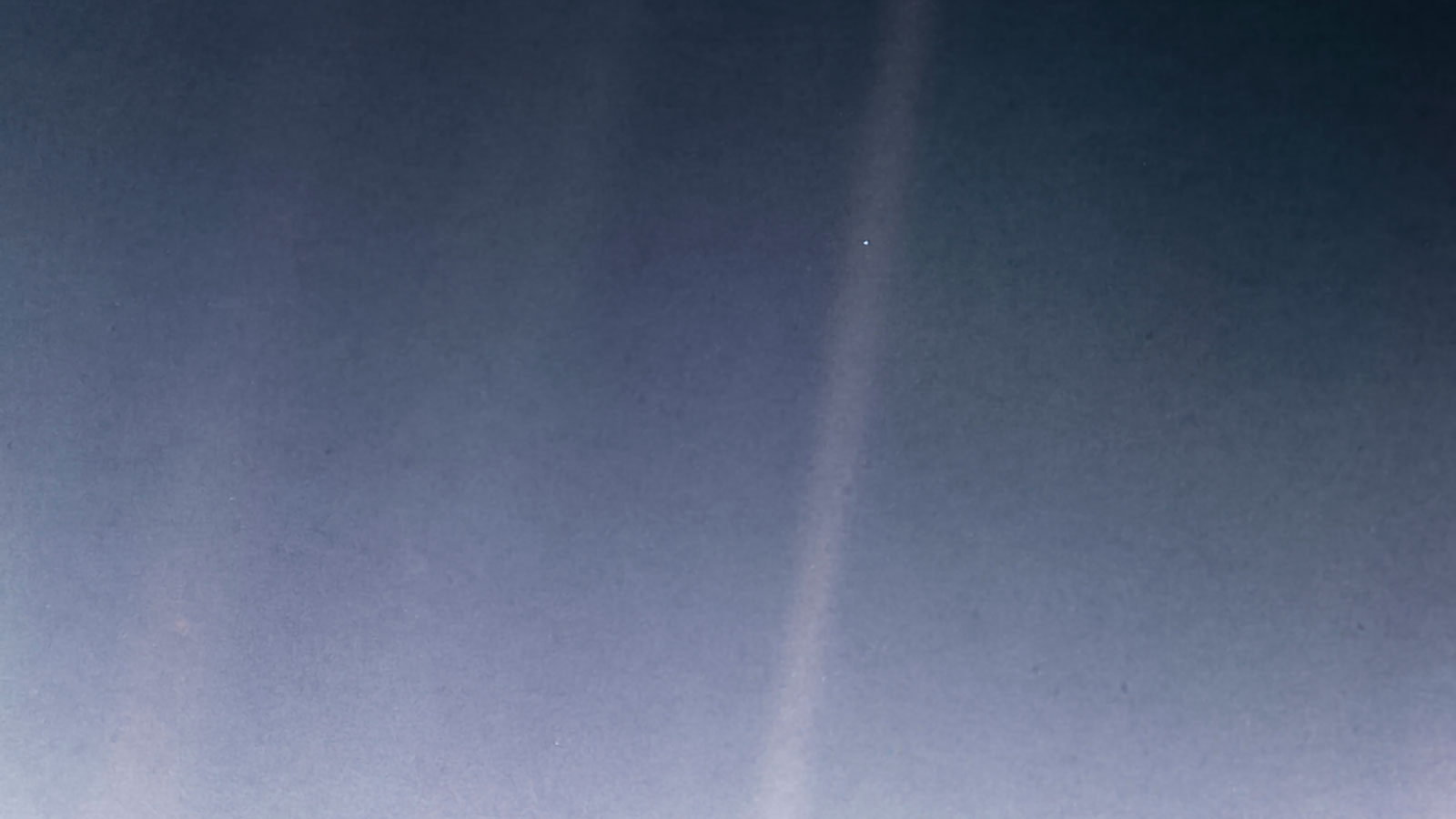 The Pale Blue Dot is a photograph of Earth taken Feb. 14, 1990, by NASA’s Voyager 1 at a distance of 3.7 billion miles (6 billion kilometers) from the Sun. The image inspired the title of scientist Carl Sagan's book, "Pale Blue Dot: A Vision of the Human