An Oasis Inside a Living Learning Community

Helping students find an identity in science and mathematics

If you wander behind West Village, the dining hall that doubles as a community center on West campus, you’ll find twin residence halls Folk and Caldwell. They look the same as other dorms on quiet West campus, but looks can be deceiving.

Inside lives a buzzing community of young scientists and mathematicians, bonded together by curiosity and chemistry labs. In the basement, students would excitedly work together to solve a problem on the white board walls, late at night before a test. In the lounges, students might vigorously debate whether a hot dog is a sandwich, citing scientific sources and data.

These students are part of the College of Sciences’ Living Learning Community, or LLC. Formerly two separate LLCs, SHaRP (Science Health and Related Professions) and SMaRT (Science and Math Research Training), the program is now known as Explore. The staff found that the two LLCS often overlapped: pre-health students were interested in research, research students were interested in pre-health, and the students spent so much time together that there was no need for division.

Jennifer Leavey, Explore’s faculty director, was a Tech undergrad herself. “I had no idea there even was a College of Sciences,” she says. “For such a long time the campus was so dominated by engineers, there wasn’t much of an identity for science and math majors.” Explore, she says, is for “the kids who are curious, the kids who like to wear NASA T-shirts.”

Explore hosts 280 students who want more from dorm life than the usual first-year experience. By joining Explore, science- and math-oriented students can live together, take classes together, and distract themselves from their studies together. It’s also a place of discovery where students can find the field that fits them best, which is why the new name is particularly apt.

“To think that a 16- or 17-year-old is going to stick with the major they chose when they applied is unrealistic and a little stifling,” says Emma Blandford, Explore’s assistant director. “To see them step back a little bit and see the other things out there and explore other opportunities is a breath of fresh air.”

A Place of Discovery
When Hudson Moss began his freshman year, he was sure that he wanted to major in biochemistry. But when Moss watched Kim Cobb give a talk on her 2016 expedition to Holiday Island, he knew immediately that he wanted to work with her.

Cobb is a professor in the School of Earth and Atmospheric Sciences. “It was really cool, the way that she talked about paleoclimate and how we can approach climate changes as a community and as a country,” Moss says. His chance came when he had to interview a professor for his SMaRT GT 1000 class. He knew exactly whom to choose.

“I managed to slip in that I wanted to work for her at some point,” Moss says, and that first meeting ignited a research path that continues today. He started attending Cobb’s lab meetings.  By the end of his second semester, Moss had started working in Cobb’s lab and officially switched his major to Earth and atmospheric sciences. He still works there today and is on his way to becoming the first author of a study mapping the 19th-century climate of the equatorial Pacific.

“That initial bump that SMaRT gave me to go interview a professor, to get out there and talk to faculty – that was huge,” Moss says. It forced him to be comfortable talking to an expert like Cobb. Now, he says, he can strike a conversation with any faculty member.

Living, Learning, and Thriving
In addition to offering LLC-specific first-year seminar classes for their students, the LLC reserves chemistry labs and even English sections so that their students are connected with the community throughout the day.

When they come home from class, the students organize stress relief activities, like cookie and milk breaks and Halloween parties. Recently, 30 students went to the Centers for Disease Control and Prevention to learn about the refugee crisis through the lens of public health.

At the start of every school year, the students go on a retreat where they climb ropes, solve escape rooms, and attend panels for advice about undergraduate research.

“They can go out and go to class and do work and they can come home – it’s their own little oasis,” Blandford says, “My hope is that the community they’re developing here is not isolating them from the rest of Tech, but helping them to feel supported to go out and try new things.”

Because Moss is now a second-year student, he is no longer officially part of the LLC, but he still goes back to give talks to the students, helping them figure out their own paths.

Alumni can also work as student assistants in the program, helping to coordinate activities, and as team leaders.

The biggest indicator of the program’s success, Blandford says, is the fact that 50% of students signed up to continue living with “smarties and sharpies” in the Eighth Street apartments across the street from Folk and Caldwell.

“They liked each other enough that they wanted to stay in this community again for another year,” Blandford says. She sees this preference as a sign that these students truly feel supported by one another.

All Together Now
“I didn’t expect everyone to come together as quickly as they did,” Bryan Gomez, a biochemistry and neuroscience major in what was formerly SHaRP, admits. “The first couple weeks, everyone was still getting to know each other, but once classes hit the ground and midterm week hit, it was like we’re all in this together.”

Gomez is still in his first year, but he started as a summer freshman. Now he works as a marketing student assistant for Explore.

He credits the LLC for the ease of his transition to college life. “They provide resources to get help when I’ve needed it and when everyone else has needed it,” he says.

Leavey wishes Explore were around when she was a Tech undergrad. “My son wants to be in the program when he goes to college,” Leavey says, laughing. 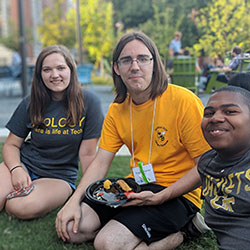 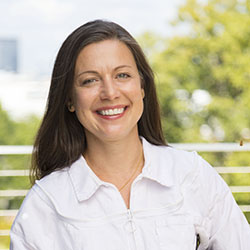 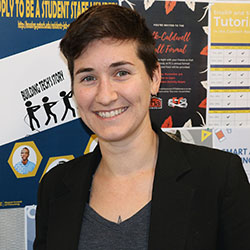 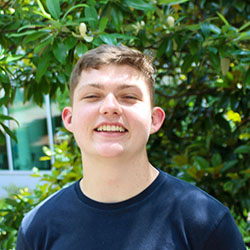 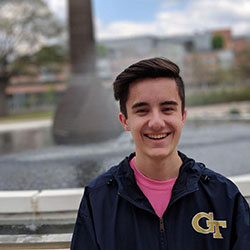 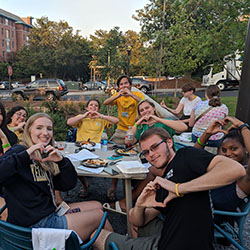