The 2018 Nobel Prize in Physics recognizes two breakthroughs that revolutionized laser physics. Optical tweezers are one of them. Using laser beams as fingers, these tools grab particles, atoms, viruses, and living cells. Arthur Ashkin, formerly of Bell Labs, receives half of the 2018 prize for this invention.

Optical tweezers have had an impact on many scientific areas by providing direct physical access to the nanoscopic world, says Jennifer Curtis, an associate professor in the Georgia Tech School of Physics. Ashkin showed that a focused laser beam could grab and manipulate tiny bits of matter. Researchers can observe what’s going on through a microscope.

“I am thrilled to see Ashkin receive a prize for his contributions,” says Curtis, who is a member of the Parker H. Petit Institute for Bioengineering and Bioscience. “His invention opened new frontiers in many fields for creative researchers who want to probe, manipulate, and engineer nanoscale matter. He inspired a next generation of scientists, including myself.”

Optical tweezers are like the tractor beams that Captain Kirk of Star Trek uses to capture enemy starships, Curtis says. They are possible, she says, because polarizable materials are attracted to regions of high electromagnetic radiation, which includes light.

“A focused laser beam provides a sweet spot for small particles localize,” Curtis explains. “The tighter the laser focus, the stronger the trap, and the more confined the particle becomes. Once trapped, particles and cells are easily moved about by simply steering the laser beam with a mirror. Hence by moving the focus of the laser around, you can move, probe, and assemble materials from the bottom up.

“It’s a fascinating tool that boggles the imagination and opens up great possibilities thanks to its ability to grab and examine what would normally be untouchable tiny pieces of matter – from DNA to viruses to organelles to red blood cells.”

As a Ph.D. student, Curtis contributed to developing the technology of optical tweezers. Her research showed that liquid crystal displays can be used to split a single laser beam into multiple beams forming a desired pattern. “We could create hundreds of optical traps and locate them in three dimensions. We could also change the position of the traps in real time,” she says.

For now, the largest impact of optical tweezers is on research, Curtis says. By enabling close examination of biological molecules, organelles, and cells and measurement of the force applied on these tiny particles, optical tweezers gave birth to the field of single-molecule biophysics. From the biophysics of DNA to the workings of molecular motors like kinesin and myosin, optical tweezers opened a window to a world that was not available before. Other fields – colloidal physics, soft-matter physics, materials science, polymer physics, statistical physics, and fluid mechanics – have been similarly energized by this tool.

The other half of the 2018 Nobel Prize in Physics is shared by Gérard Mourou, at the École Polytechnique near Paris, and Donna Strickland, at the University of Waterloo in Ontario. They invented a way to create the shortest and most intense laser pulses ever. Applications of their work include millions of corrective eye surgeries. 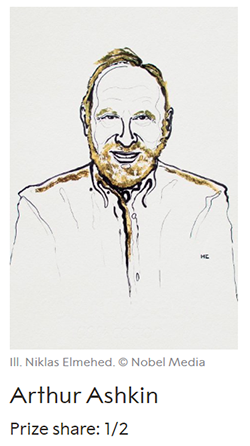 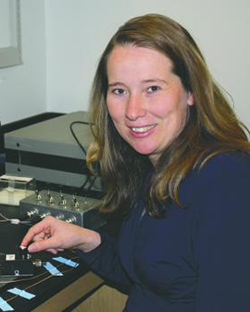