By A. Maureen Rouhi

Examine your hands. The right is a mirror image of the left. They look very similar, but you know they’re not when you try to put your left hand inside a right glove.

The molecules of life have a similar handedness. Proteins for example are like your left hand, made up of amino acids that are all left-handed. This phenomenon is called chirality. How chiral systems emerged is one of the key questions of origins-of-life research.

Many explanations have been proposed. Now a Georgia Tech team examining the problem suggests that stability is what drove the emergence of chiral systems. Led by Jeffrey Skolnick, a professor in the School of Biological Sciences, the team includes  research scientists Hongyi Zhou and Mu Gao. The work was supported in part by the Division of General Medical Sciences of the National Institutes of Health (NIH Grant R35-118039) and published on Dec. 10, 2019, in PNAS.

“This ability of nonchiral proteins to fold and function might have been an essential prerequisite for the life on Earth,” says Eugene Koonin, a senior investigator at the National Center for Biotechnology Information, in the National Institutes of Health. “If so, this result is a truly fundamental finding that contributes to our understanding of the origins of life.”

However, nonchiral proteins have fewer hydrogen bonds than those made of all D or all L amino acids. The demi-chiral ones have the fewest. Thus chiral proteins are much more stable than demi-chiral ones. “The biochemistry of life as we know it likely results from stability driven by hydrogen bonds,” says Skolnick, who is a member of the Parker H. Petit Institute of Bioengineering and Bioscience.

The PNAS study examines the properties of proteins from the point of view of physics alone, without the intervention of evolution, Skolnick says. “It explains how the chemistry of life emerged from basic physical principles. It also strongly suggests that simple life might be quite ubiquitous throughout the universe.”

“I wish to understand how life emerged and to know its design principles,” Skolnick says. “On the most academic level, I wish to explain the origin of life based on physics with well-defined testable ideas.”

The newly published “work offers a non-intelligent-design perspective as to how the biochemistry of life might have gotten started,” Skolnick says. “It shifts the emphasis from evolution to the inherent physical properties of proteins. It removes that chicken-and-egg quandary that chiral RNA is required to produce chiral proteins. Rather, such excess chirality is shown to emerge naturally from a nonchiral system.”

Skolnick says the next step is to test the computer simulations by studying the emergent chemistry of nonchiral proteins.  A key unanswered question is how did replication emerge? “We can explain life’s biochemistry and many of the parts associated with replication from this study, but not replication itself,” he says. “If we can do this, then we have all of life’s components. If this works, ultimately I want to recreate what could be the early living systems in a test tube.” 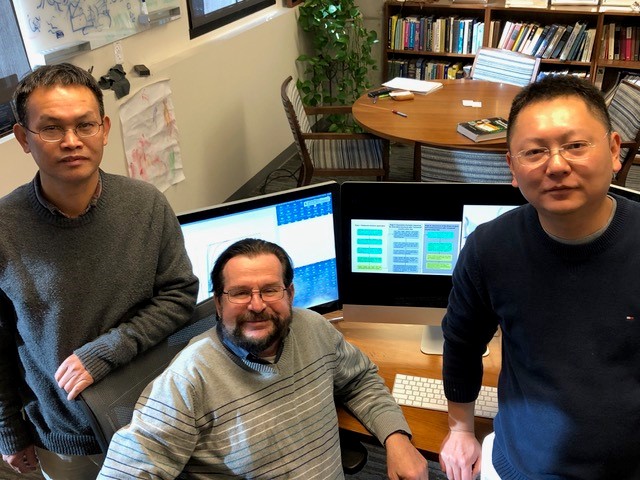