Physics of Living Systems researcher Jeremy England has received the 2021 Irwin Oppenheim Award from the American Physical Society for his research on how elements of chemical systems make copies of themselves – and whether scientists can design those capabilities when they try to build their own self-replicating chemical models.

The study of self-replicating systems has long fascinated Jeremy L. England, who has worked with the Massachusetts Institute of Technology and currently conducts research with Georgia Tech’s School of Physics.

“Thinking about the physics of when self-copying things are likely to spontaneously emerge has been something I have been doing since I started my first faculty position,” England says.

England shares the Oppenheim Award with Sumantra Sarkar, a postdoctoral fellow at the Center for Nonlinear Studies at Los Alamos National Laboratory. The publication of their research in Physical Review E in August 2019 was cited by the APS in their award description:

“For developing a theory of the emergence of self-replication in simple chemical models, and the definition of general design principles for constructing self-replicating objects, which is published in the article entitled ‘Design of conditions for self-replication’ in Physical Review E 100, 022414 (2019).”

“I am very excited and humbled by this totally unexpected honor,” England says. “Sumantra's project was the first piece of work in our group that really focused on the ‘spontaneous emergence’ aspect, and I think the most important thing about it is that we were trying to really be practical and concrete, and hopefully provide design principles that will make it easier for experimentalists to devise conditions in the future, where they can see this kind of emergence at play in processes of self-assembly they are trying to cultivate from mixtures of simple building blocks.”

England is also part of a Georgia Tech research team that was awarded a $6.25 million Department of Defense grant in April 2019 to examine collective emergent behavior for achieving task-oriented objectives. 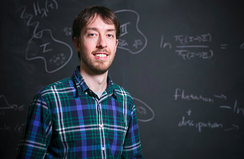