The 'Pingo' Connection: Making a Data Mountain out of Ice-Cored Hills — on Earth and a Dwarf Planet

This research is among observations from the second extended NASA Dawn mission to Ceres. The mission’s findings are presented in a suite of seven papers, published this week in Nature Astronomy, Nature Geoscience and Nature Communications. Read the papers via Nature and news release via NASA Jet Propulsion Laboratory.

What do the Arctic Circle, an area near Mars’ equator, and the largest object orbiting between Mars and Jupiter have in common? Arctic pingos are the archetype of this feature, but it’s possible that all three are home to pingos: dome-like, ice-filled hills created by subterranean water and ice pushing up to the surface.

Researchers from the School of Earth and Atmospheric Sciences are studying that potential pingo connection, which could lead to new insights about the role of water in shaping the geology of icy bodies elsewhere in the solar system, as well as a better understanding of the potential impacts of pingos on Earth’s climate.

That research comes in two phases. The first is the team’s new study, published in Nature Geosciences, regarding the possibility of pingos on the dwarf planet Ceres. The researchers used data from the last science orbits of Ceres by NASA's Dawn probe before its mission exploring the two most massive bodies in the asteroid belt, Vesta and Ceres, ended in late 2018. Situated between Mars and Jupiter, Ceres is our inner solar system’s only dwarf planet and is the asteroid belt’s largest object — roughly as wide as the state of Texas.

The second phase of the team’s research will focus on learning more about Earth’s pingos to boost knowledge of those elsewhere in the solar system, thanks to a new $2 million grant called Pingo STARR that will enable the first-ever detailed mapping of the hydrology of Arctic pingos.

Pingos form when freezing water is forced up through cracks in the crust of the permafrost in the Arctic region of Earth. The subsurface water freezes, pushing up the ground to create a dome. The more water that reaches near the surface, the larger the ice-filled mountain will become — driven by pressure that forces the water to rise. As long as water can flow to the pingo, it will continue to push up the frozen plug, so many pingos continue to grow for hundreds to thousands of years. Pingos on Earth can range in height from ten to around 200 feet.

“We haven’t shown that pingos exist on Ceres, per se, but we have identified features that resemble their morphologies and mimic their group characteristics,” says Kynan Hughson, a postdoctoral fellow working with associate professor Britney Schmidt. Hughson and Schmidt were lead investigators for the study.

“One of my favorite ways to study other planets is by taking a look at what happens on Earth in similar environments — and reanalyzing how the same processes could operate on other planets, using the Earth as an analog. We’ve been particularly interested in how we can use this approach to study hidden ice and water on other planets,” says Schmidt.

The research team, which included one of Schmidt’s undergraduate students, Kayla Duarte Brady, started its analysis after identifying some unusual hills — several hundred meters in diameter — that don’t look like common hill types created in impact craters. The team worked with other members of the Dawn team, using imaging and topographical data to establish that many of the hills have nearly identical shapes and aspect ratios to pingos on Earth. The scientists combed through the high-resolution image data from Ceres to map and categorize all possible pingo-like hills in the dwarf planet’s Occator crater.

“We then analyzed their distribution and found that they preferentially form on top of material that is likely rich in water ice,” Hughson says. “We also found that they cluster and organize in ways similar to terrestrial pingos. The combination of morphology, distribution, clustering behavior, association with water-rich materials, and young apparent age, in our opinions, made an extremely compelling case for these features to be ice-cored hills — like pingos on Earth.”

“I am so proud of this project, in part because I’ve been fascinated by pingos since I was in grad school, and in part because of the amazing team, which would not have happened without undergraduates like Kayla,” says Schmidt. “I was a Ph.D. student on the Dawn team when the mission launched. It feels poetic to work with my own students on the last papers of the active mission.”

For Duarte Brady, the Ceres research gave her a taste of high-level analysis and of studies usually encountered at the graduate level. “I knew when I started researching under Britney that I would be working on an amazing project, but the responsibilities and opportunities she gave me greatly exceeded my expectations,” she says. “Having the chance to be so deeply involved with the Dawn Mission as an undergraduate was a priceless experience. I was able to learn from and assist some of the top scientists in the field — and knowing I had a real part in this research is truly fulfilling.”

The 940 kilometer-wide Ceres is classified as a C-type asteroid, which make up most of the mapped asteroids in the solar system. They are also among the darkest. The team’s research shows that Ceres, and possibly other C-type asteroids, are water-rich bodies in the inner solar system. These bodies got started along the way to being planets but ran out of heat necessary to evolve further. They also rained down on the early Earth.

“Places like Ceres are important to investigate because they are in a state of arrested development. Ceres is one of the few places in the solar system where we can take a snapshot of how water-rock interactions — like those that fuel life on Earth — operate in the absence of life, which tells us about our own planet’s early days,” Schmidt notes.

“This analysis suggests that recent impact cratering can melt ice and mobilize water into hydrological systems similar to some on Earth,” Hughson says. “In the early history of the solar system, when Ceres was warmer, it likely possessed the necessary ingredients for prebiotic conditions like some that existed on Earth; however, it’s unlikely that Ceres has ever supported alien life.”

NASA’s future missions include hopes for sending probes to icy moons and asteroids to understand how water and ice have shaped the solar system, including future searches for life. Schmidt’s deep research relationship with the space agency involves designing scientific goals for probes that would explore Europa, a moon of Jupiter. That work includes the Icefin probe, a torpedo-shaped vehicle that is currently being tested by collecting data deep in the waters of Antarctica. Schmidt and Hughson both hope for a return to Ceres in the near future, this time with a lander.

“Sampling and analyzing the rock and ice on the surface of Ceres, as well as confirming the icy nature of these mounds in the future, will help inform us of Ceres’ past and present habitability,” Hughson says. “This will also inform us of rock-weathering processes that take place within the interiors of icy moons like Europa and Enceladus — and shed light on the origin of Earth’s water.”

Mapping and surveying pingos are necessary steps towards understanding potentially similar features on other worlds like Ceres and Mars, Hughson says. But when it comes to the active pingos within the Arctic Circle, “full 3D characterization of pingos, and their surrounding and underlying hydrology, has not been done. Filling in this knowledge gap not only teaches us more about these Arctic oddities and processes that govern them on Earth — but allows us to construct more detailed and testable hypotheses about how pingo analogs might form in the solar system.”

The forthcoming Arctic research by the Georgia Tech team and their colleagues from Colorado School of Mines and the Planetary Science Institute will involve extensive permafrost studies, ground penetrating radar, and electromagnetic sounding techniques. Those same methods will also be used by robotic probes, and eventually astronauts, “to detect, understand, and eventually utilize groundwater and ground ice deposits on worlds such as Mars and Ceres,” Hughson says.

Recent news reports focused on an uncharacteristically hot year for Siberia, which was accompanied by a thawing of that region’s permafrost, another potential warning sign of climate change’s impact on the planet.

Since pingos form within permafrost, they can also be “important recorders of climate history, and their size and texture tell us about recent changes in the Arctic,” Hughson says.

By observing and characterizing pingo ice structure, using techniques like radar and other geophysical sensors over several years, “we will be able to identify rapid changes in ice-saturated permafrost, and evaluate how changing pingo hydrologic systems are affecting ground stability and coastal erosion in northern communities.” 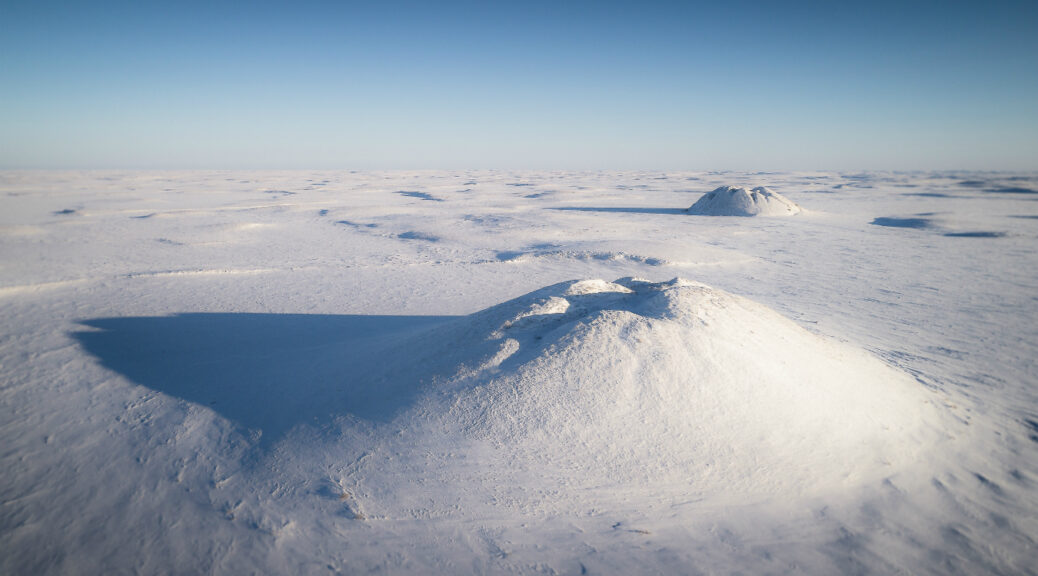 A representative photo of ice-cored pingos, emerging from the permafrost and dotting the arctic landscape near Tuktoyaktuk, in the Northwest Territories of Canada. Credit: Matt Jacques, Monte Cristo Magazine 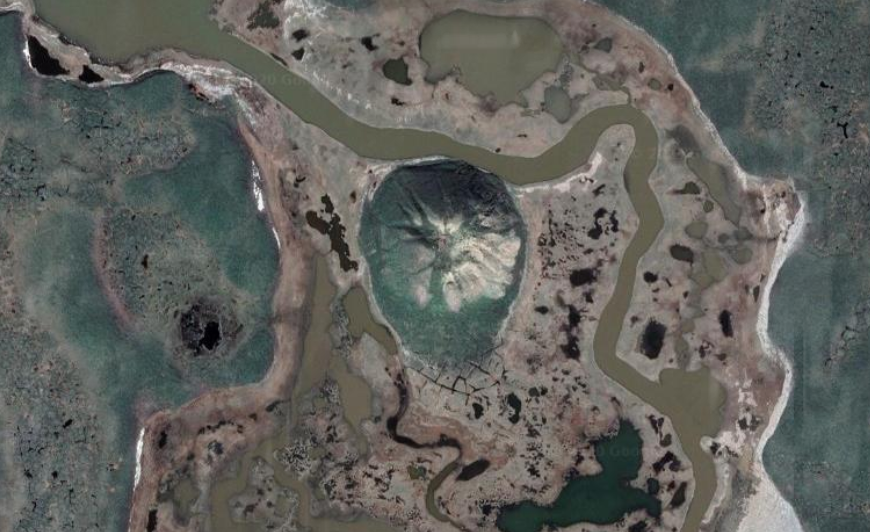 Ibyuk Pingo in Canada, as seen from directly above. Mars, Ceres, and the Earth have abundant reserves of ground ice. On Earth, ice-cored mounds known as pingos are important indicators of groundwater systems and local climate. Credit: Google Earth 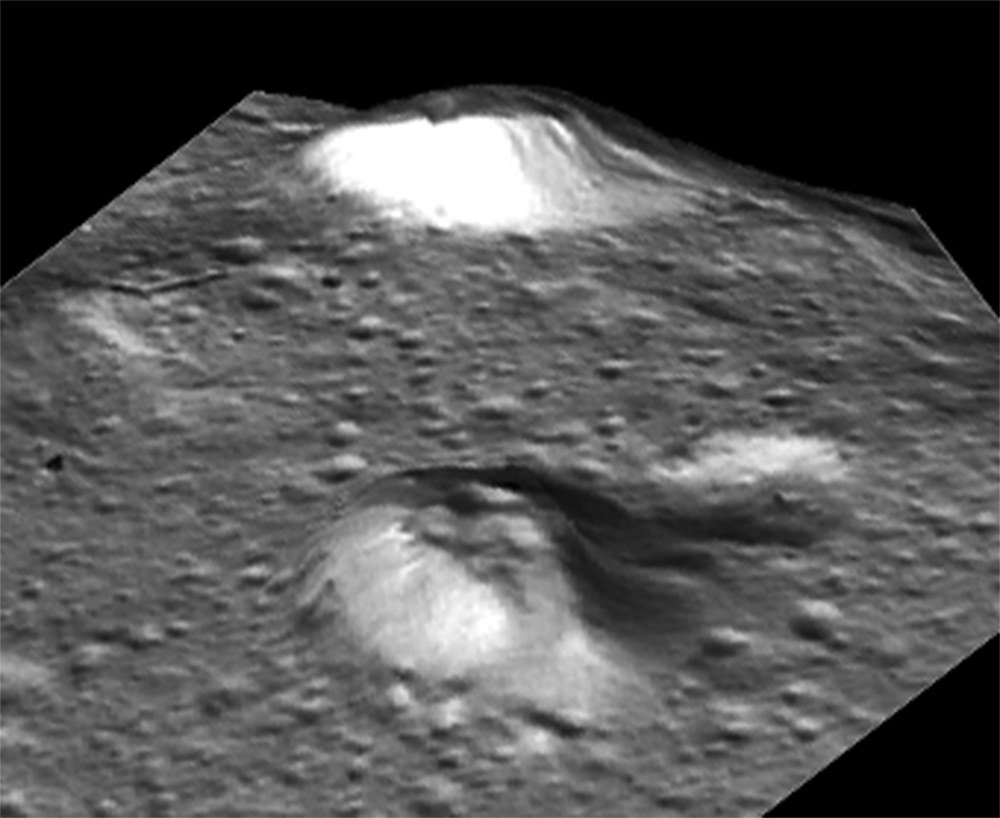 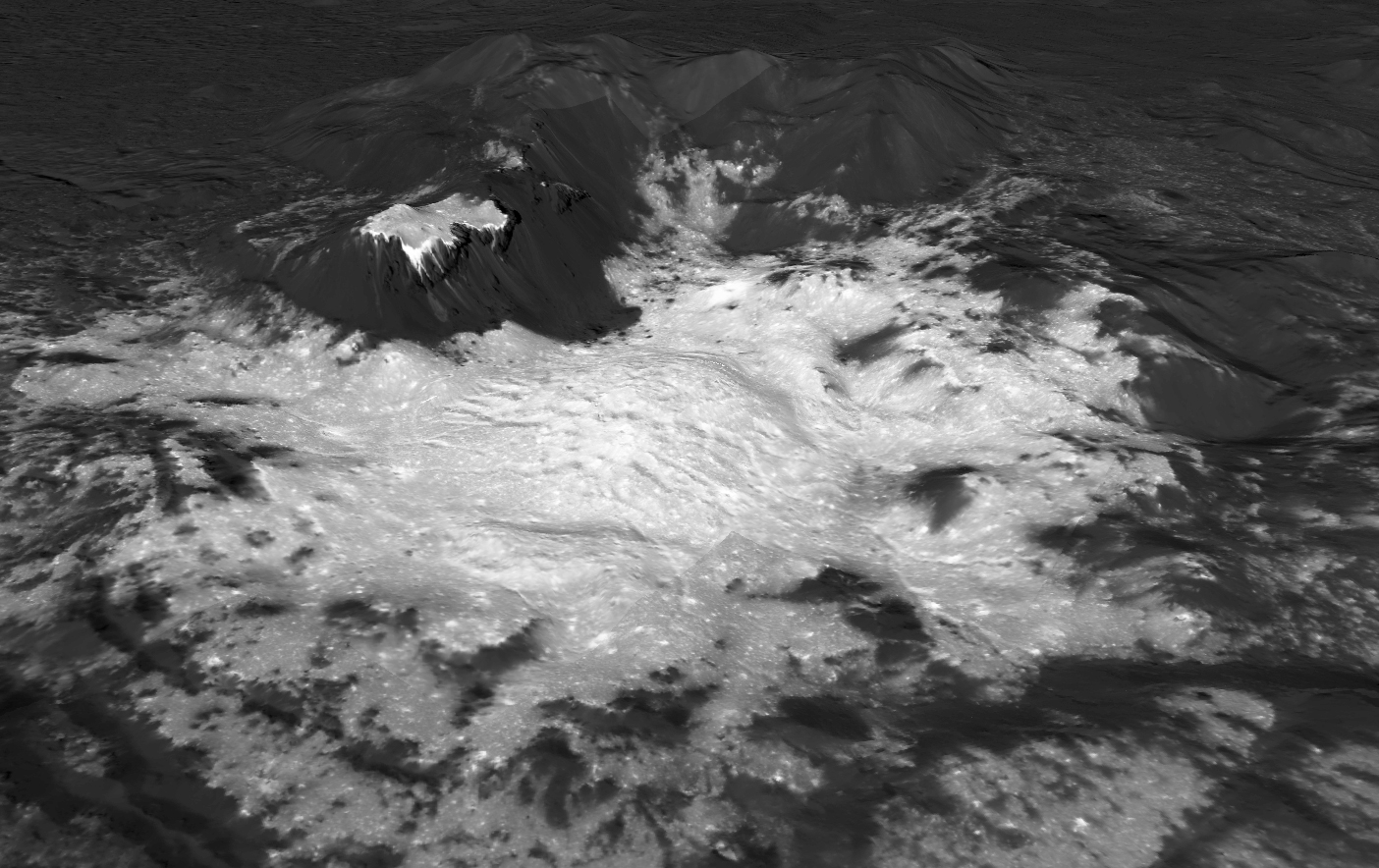 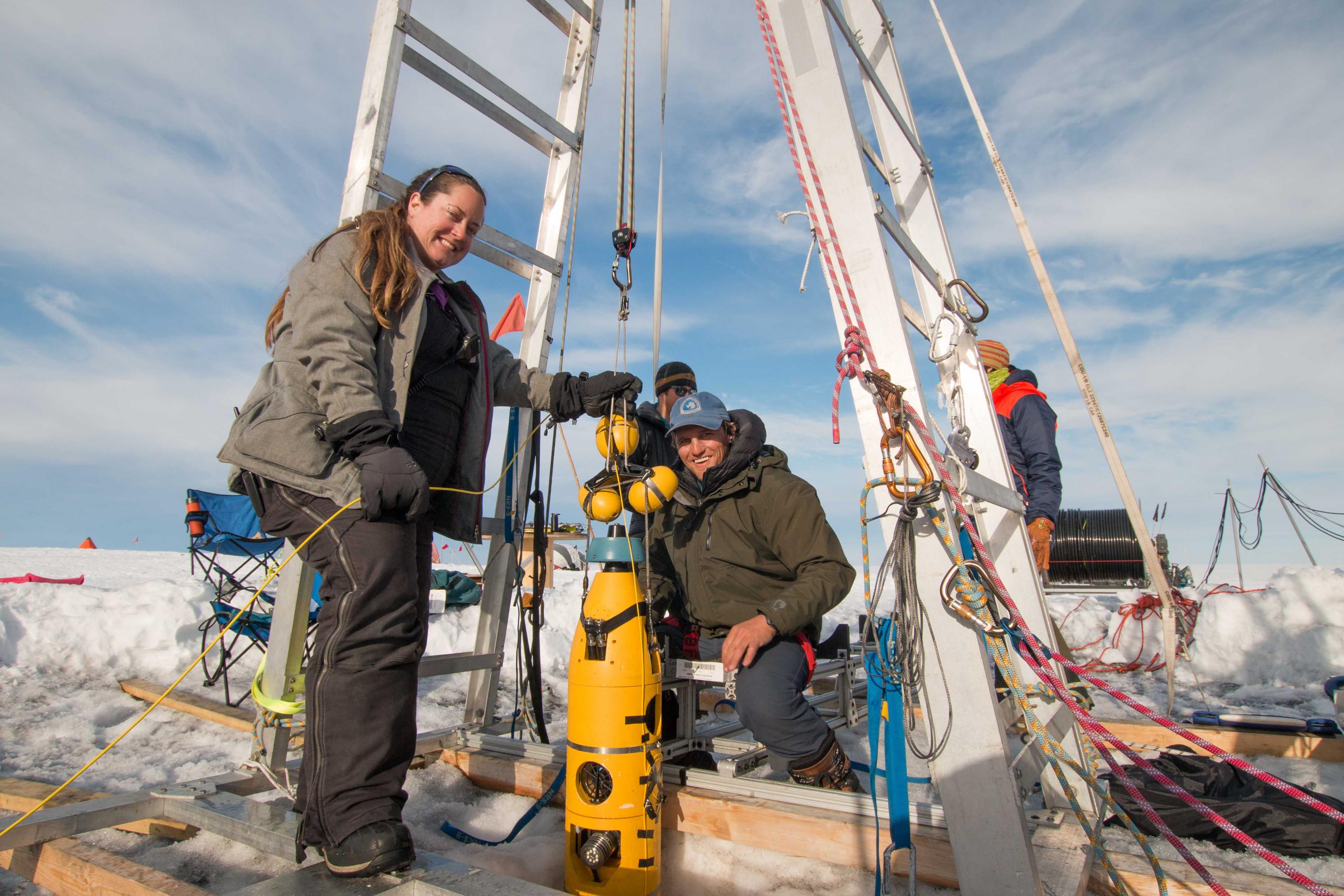 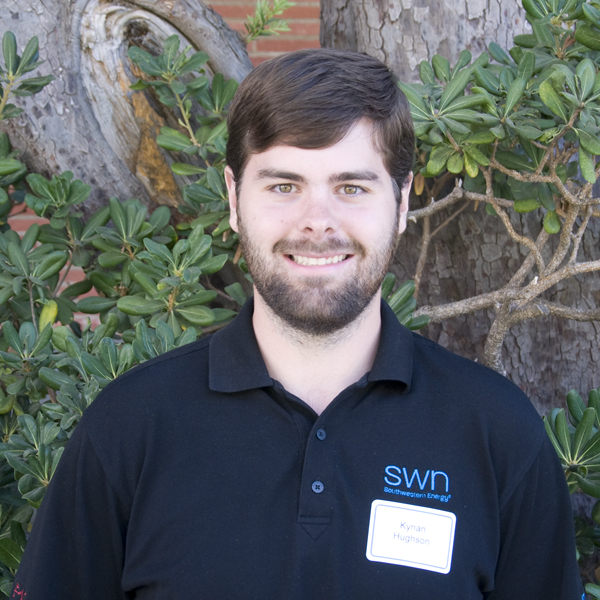