President Peterson and His Favorite Element

The monthly series "My Favorite Element" is part of Georgia Tech's celebration of 2019 as the International Year of the Periodic Table of Chemical Elements, #IYPT2019GT. Each month a member of the Georgia Tech community will share his/her favorite element via video.

Dr. G.P. "Bud" Peterson is the 11th president of Georgia Institute of Technology.

In this capacity he oversees a top-ten public research university with more than 36,900 students and research expenditures of more than $908 million.

Throughout his career, Dr. Peterson has helped establish national education and research agendas, serving on numerous industry, government, and academic task forces and committees. A distinguished scientist, Dr. Peterson was selected in 2008 by President George W. Bush to serve on the National Science Board through 2014. The Board oversees the National Science Foundation (NSF) and advises the President and Congress on national policy related to science and engineering research and education.

In January 2019, Dr. Peterson announced he will retire as Georgia Tech's president in summer 2019.

His favorite element is .... Watch the video!

Renay San Miguel, communications officer in the College of Sciences, produced and edited the videos in this series.

Other videos in this series are available at https://periodictable.gatech.edu/. 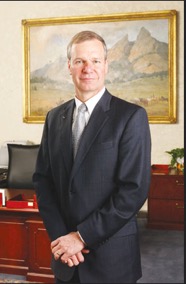