A touring musical celebrating the man who gave us penicillin is inviting local scientists to join the chorus for its Atlanta shows — and School of Biological Sciences Associate Professor Brian Hammer is ready for showtime.

When he was 14 years old, Brian Hammer learned the hard way about the dangers of bacteria, and the wonders of penicillin, thanks to a wrestling bout with a sibling.

“My older brother thought it would be fun to wrestle me holding my dad’s fishing knife,” said Hammer, an associate professor in the School of Biological Sciences. What wasn’t fun: accidentally ending up with a stab wound in his leg.

The next day he couldn’t walk and had a high fever, thanks to a blood infection caused by Staphylococcus bacteria on his skin ending up in his wound. “Those bacteria can grow very quickly in your blood. And they should never be there,” Hammer said. Doctors gave him penicillin intravenously, and Hammer remained in a hospital for nearly a month before recovering.

Now, this November, Hammer — who performed in high school and college musicals and choruses — will get to sing the praises of Alexander Fleming, the Scottish scientist who indirectly healed him by discovering the antibacterial qualities of penicillin.

Hammer will be in the chorus at the Science Gallery at Pullman Yards Nov. 1-6, 2022 when the musical “The Mold That Changed The World” comes to Atlanta during its U.S. tour. It will be the second stop for the show, which has its stateside premiere in Washington, D.C.

Hammer, who is also a faculty member of Georgia Tech’s Center for Microbial Dynamics and Infection (CMDI), is getting a chance to dust off singing skills because the musical is giving local professionals in science and health-related industries a chance to join the chorus when the show comes to their city. Colleagues at the Centers for Disease Control, which is co-sponsoring the musical’s 2022 U.S. tour, have also successfully auditioned to sing in the Atlanta performances, as have other area scientists and researchers, along with an emergency medical technician and a veterinarian.

For Hammer, there are strong similarities in singing about science, and teaching it at Georgia Tech. “There's a lot of entertainment in teaching, a lot of showmanship. It’s the way I got interested in microbiology, when the teacher was pretty charismatic and dynamic. So I've always wanted to be that kind of teacher.”

“The Mold That Changed The World” doesn’t just focus on Fleming’s discovery. It also shows how Fleming overcame social obstacles to finding life-saving qualities in a “nasty mold,” as Hammer put it, and conveys in singing and music the dangers of relying too much on antibacterial drugs — an ongoing worry that has Hammer and several other CMDI researchers looking for new treatments.

“Fleming won the Nobel Prize for discovering the first antibiotic, penicillin, and even in his Nobel Prize speech, he predicted the dangers of the emergence of resistant microbes,” Hammer said. “He said then that he can imagine a scenario in the future where if someone doesn't take their antibiotics correctly, you could end up with resistant ‘superbugs’ that get transferred to another person. And then you don't have a treatment. He said that in 1945.”

Warning children about antimicrobial resistance (AMR) was the chief reason the Charades Theater Company in the United Kingdom staged “The Mold That Changed the World,” which was first performed for primary grades. The company thought it would be a fun and effective way to teach children ages 9-12 about the proper use of antibiotics. It was that educational aspect that attracted Hammer.

The musical did prove effective. A 2020 UK study showed that students answered more questions about AMR correctly and retained more of the science information after seeing the musical.

As a teenager, Hammer sang in high school musical productions like “Godspell.” He then went to Boston College, where he joined the university chorale and got to sing for Pope John Paul II at St. Peter’s Basilica in the Vatican.

But Hammer was also busy earning his B.S. in biology. He went on to receive his M.S. in conservation biology and a Ph.D. in microbiology and immunology from the University of Michigan. He said his desire to sing was overcome by his desire to learn everything about microbes and how they impact ecosystems and biodiversity — and then what they can do to humans.

In the Hammer Lab at Georgia Tech, he and his team study microbial interactions at scales that span genes and genomes, regulatory networks, cells, populations, and communities. His longtime focus has been on Vibrio cholerae, the waterborne pathogen that causes cholera.

“It’s this combination of thinking about pathogens and their ecological environment,” Hammer explained. “It's still fascinating to me how microbes can do all they need to do to live out there somewhere else, and then they can adapt to life in our bodies and wreak havoc. That single cells can do this still blows my mind, and how they do it, and what the consequences are. And cholera was the first 'bug' that I worked on that had this kind of dual lifestyle.”

Hammer was preparing for the Fall 2022 semester when his wife, Tracy, a fifth-grade teacher, said she would be taking her students to a children’s version of “The Mold That Changed The World” when the musical’s cast came to Atlanta. “She found out about it because some of the parents in her school work at the CDC,” he said. “She knew that I had done this (sung in musicals).” A visit to the musical’s website led him to audition for the special chorus.

Hammer said that his chance to perform on stage again isn’t just about educating audiences. It’s also about showing humanity in science, he added.

“I think part of this is also to remind people that we scientists are just normal people too. I think there's this misperception that scientists are elitists who don't know how to interact with other people, or choose not to, or can’t. We're not elitist, we just have an area that we think about a lot – just like everyone else has subjects that they think about, and have strong opinions about and expertise in. So we're no different.” 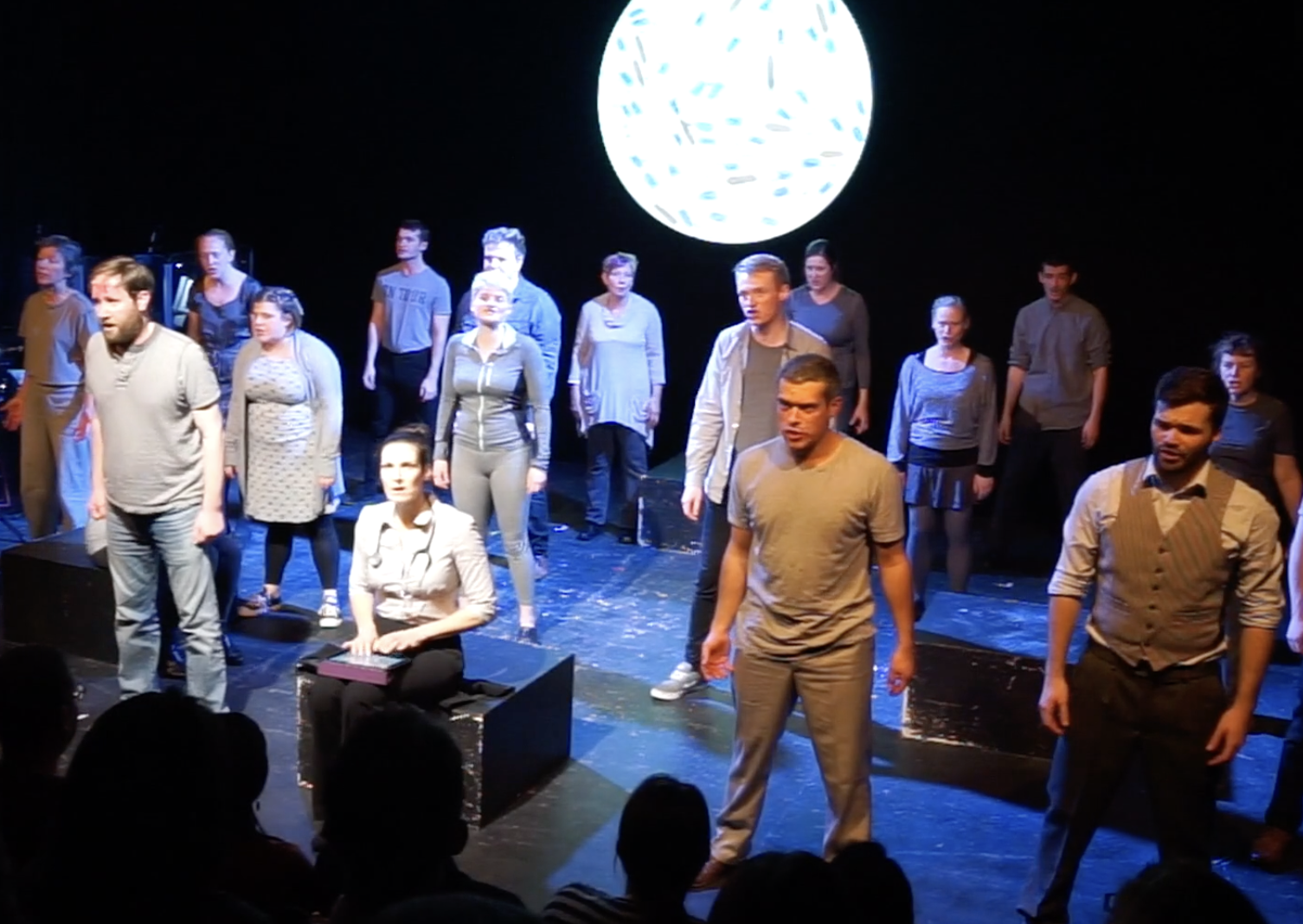 A rehearsal for "The Mold That Changed the World" musical. (Photo Charades Theater Company). 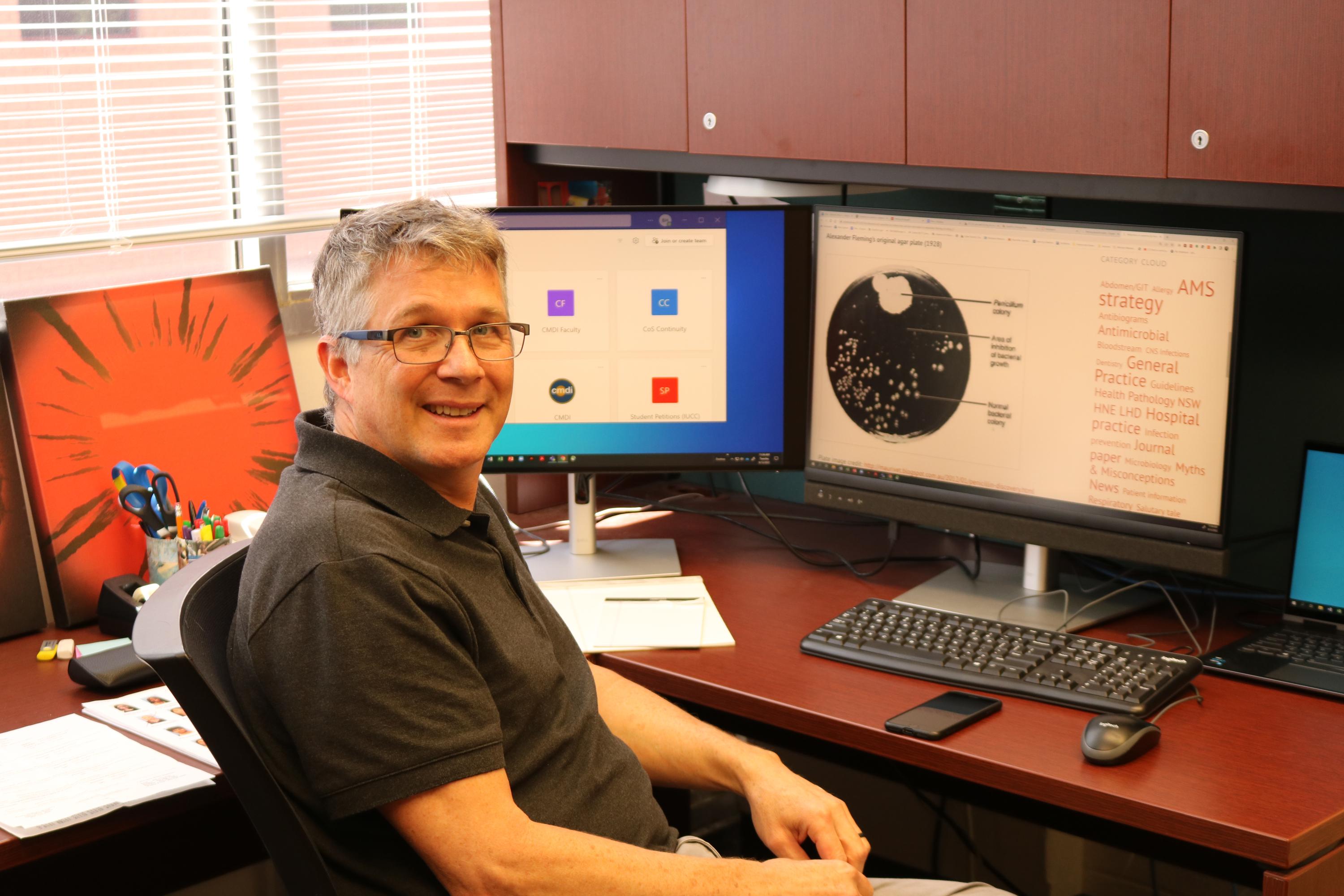 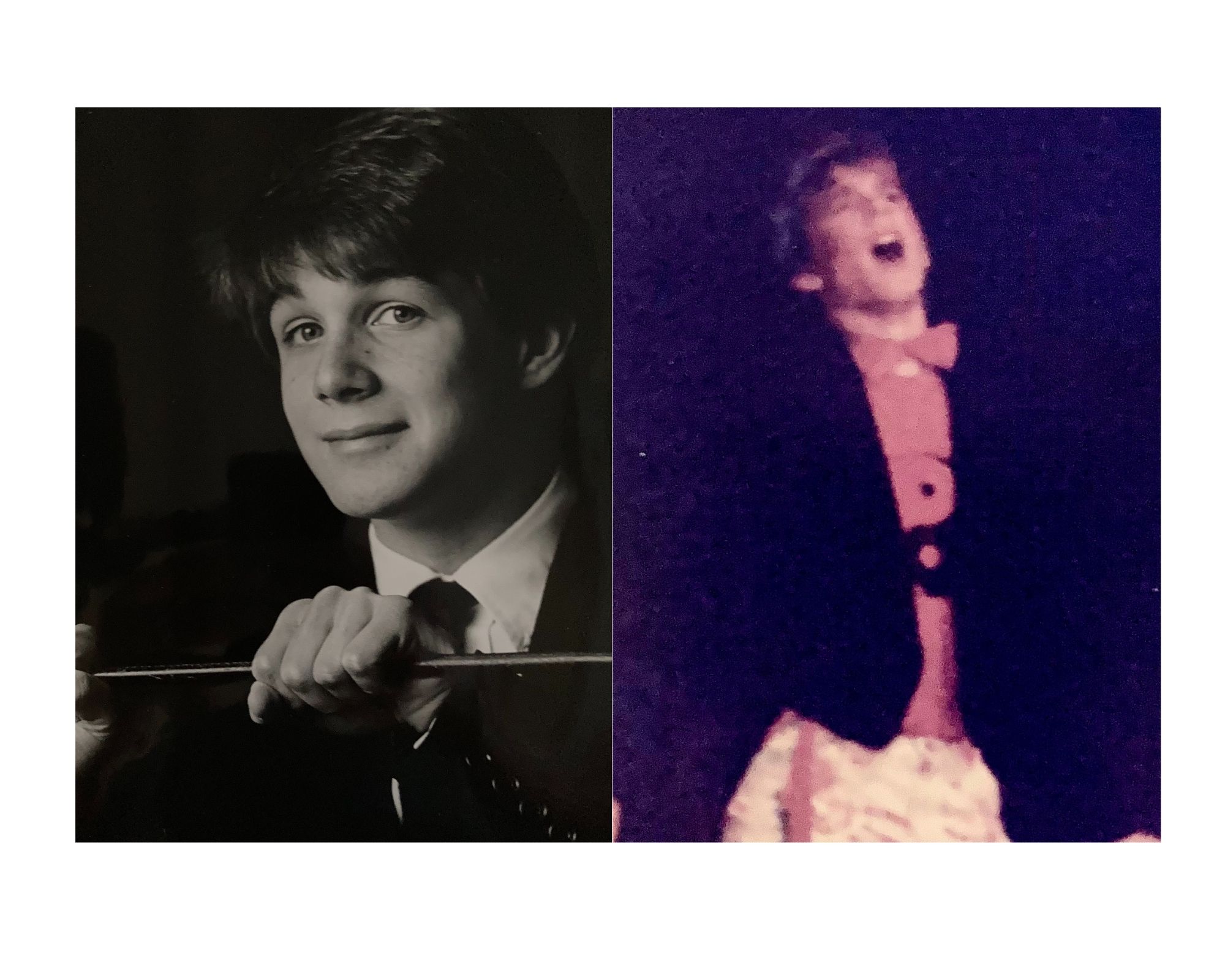 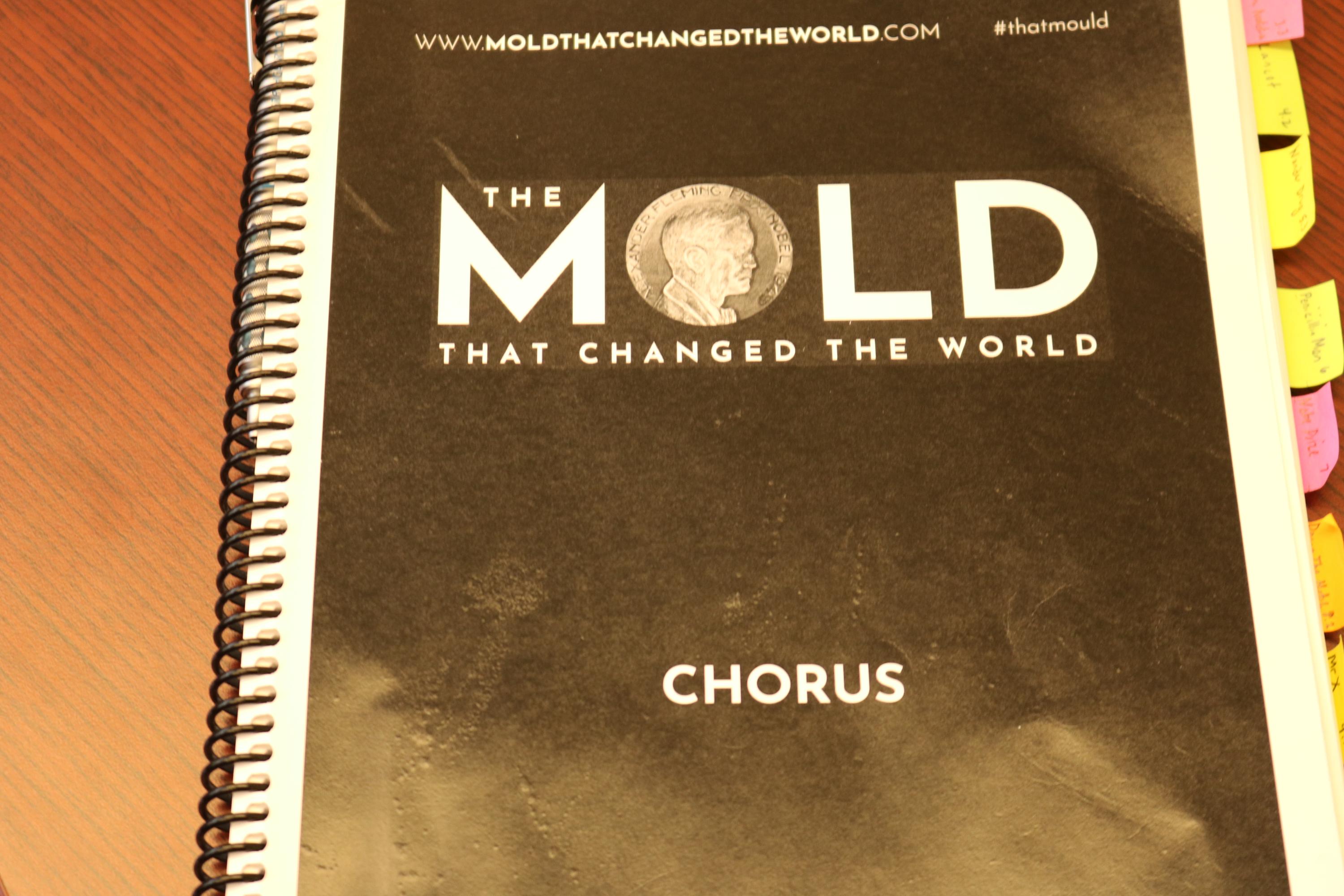 Brian Hammer's copy of the chorus lyrics from The Mold That Changed the World musical. (Photo Renay San Miguel)