Stephen Hawking spent his distinguished career studying the universe. It seems only fitting that the universe would have a say in the circumstances of the world-famous scientist’s death.

Hawking died on March 14 – Albert Einstein’s birthday. The day is also known as Pi Day (3.14 are the first three numbers of the famed mathematical constant.) Like Einstein, Hawking died at the age of 76.

A more profound connection between the two legendary geniuses is noted by City University of New York physics professor and author Michio Kaku in the New York Times obituary for Hawking: “Not since Albert Einstein has a scientist so captured the public imagination and endeared himself to tens of millions of people around the world,” Kaku says.

Hawking’s most impactful work in physics and cosmology involves the study of black holes, which are super-dense wells of gravity in space so powerful that not even light can escape them. It was Einstein who first predicted their existence, in the same 1916 research that posited his general theory of relativity. Hawking took Einstein’s foundational work and enhanced it with his own theory that black holes could dribble out energy in the form of heat before eventually disappearing – a theory now known as Hawking radiation.

Einstein predicted something else: the existence of gravitational waves, ripples in space and time caused when black holes collide. The Laser Interferometer Gravitational-Waves Observatory (LIGO) detected those waves for the first time in 2015. The LIGO Scientific Collaboration (LSC) supporting the effort, which led to the 2017 Nobel Prize in Physics, included the work of 17 Georgia Tech faculty and students.

School of Physics researchers share their thoughts on Hawking, what he meant to science, and how he inspired their research:

Paul Goldbart, Dean of the College of Sciences, Betsy Middleton and John Clark Sutherland Chair, and professor in the School of Physics

“I was an undergraduate at Gonville and Caius College in the University of Cambridge, where Stephen Hawking was a Fellow of the College. My hall of residence for my first year was next door to his home on West Road. I would see him on many evenings, as we made our way the half-mile or so across the River Cam, and through the grounds of Kings College, to Caius for dinner.”

Pablo Laguna, LSC member, professor, and chair of the School of Physics

“Regarding his influence on my work, I would say it has been mostly inspirational. From the beginning of my career, Hawking’s work fueled my research to understand black hole phenomena where gravity has its strongest grip.”

In addition to general relativity, Hawking was a leader in the search for extraterrestrial life. He served as a board member of the Breakthrough Starshot Initiative, which aims to visit our nearest neighboring star, Alpha Centauri. I was a member of the advisory committee, and now my students characterize the habitability of these extrasolar planets.”

“Our understanding of black holes today has its foundation in the work of Stephen Hawking. While his most famous work was the discovery of black hole evaporation via the appropriately-named Hawking radiation, his work on black holes and singularity theories in the 1960s and 1970s informed generations of scientists, work that he continued throughout his life. The research I have had the good fortune to be involved with – predicting the gravitational radiation from the merger of two black holes and their subsequent detection by LIGO – relies on lessons from Hawking’s work, such as his black hole area theorem, and his work on the no-hair theorem. His work will live on and continue to influence future generations of physicists and astrophysicists.”

“Stephen Hawking predicted thermal radiation by black holes. This results in black holes, very slowly, losing mass. As time goes on, the mass loss accelerates and the temperature of the black hole increases. The black hole eventually disappears in a flash of particles, including neutrinos. My doctoral student Pranav Dave is re-interpreting existing results by the IceCube neutrino observatory to search for ‘primordial black holes’ that would produce such a burst of neutrinos.” 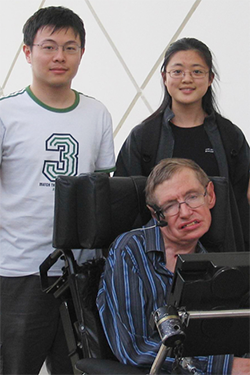