Seth Marder is on faculty development leave at various institutes across Europe, taking a break from his daily routine and attempting to allow himself time to think deeply about research.

“In most of the places that I’m visiting, I have collaborations,” he said. “This faculty development leave allows me to have quality time with the people with whom I’m collaborating or developing new collaborations with around the world, which is very intellectually stimulating.”

He’ll return to campus for the Faculty Staff Honors Luncheon on April 11, where he will receive Georgia Tech’s highest award given to a faculty member: the Class of 1934 Distinguished Professor Award.

The award recognizes outstanding achievement in teaching, research, and service. Instituted in 1984 by the Class of 1934 in observance of its 50th reunion, the award is presented to a professor who has made significant long-term contributions — contributions that have brought widespread recognition to the professor, to his or her school, and to the Institute.

“The award means a lot to me because Georgia Tech is near and dear to my heart,” said Marder, Regents Professor and Georgia Power Chair of Energy Efficiency in the School of Chemistry and Biochemistry and the School of Materials Science and Engineering (courtesy). “I care a lot about the various aspects of my job that transcend the standard research and teaching aspects. I think this award is a reflection of the fact that the Institute values a faculty member’s contributions beyond teaching and research. It’s very special to have that kind of recognition.”

Marder is the third chemistry professor to receive the Distinguished Professor Award in recent years; Gary Schuster was the recipient last year, and Charles Liotta was honored a few years ago.

“The School of Chemistry and Biochemistry is a special place,” Marder said. “There are a lot of people in the school who are really dedicated to working to make Georgia Tech a better place. They’re willing to invest the time to do so.”

"Seth Marder's depth and breadth of accomplishment not only in his research endeavors, but also in all facets of his role as a faculty member epitomize the values and quality to which Georgia Tech aspires."

The Right Environment for Research

Marder grew up in Brooklyn, New York. His mother was a piano teacher, and his father was an educator in the New York City School system. His parents valued education and encouraged him to question authority and conventional wisdom.

After earning a bachelor’s degree from MIT, a Ph.D. from the University of Wisconsin, and completing postdoctoral studies at Oxford University and Caltech, he worked at Caltech and NASA Jet Propulsion Laboratory (JPL) for several years. He was a professor at the University of Arizona for five years before joining the Georgia Tech faculty in 2003. He came to Tech as part of a team, with three other faculty members.

“One of the things that was so attractive about Georgia Tech was that the place was on the move,” Marder said. “And, I felt that people who have the desire to work to build a better place really could have the opportunity to do so in the environment that Georgia Tech fosters. Fifteen years later that still proves to be true.”

Marder’s research pertains to organic materials — essentially plastic-like materials — for photonics and electronics. Organic materials for photonics have applications in areas such as 3-D microfabrication (where Marder’s contributions with Professor Joseph Perry led to a successful spinoff company) and very high-speed data processing and communication. Materials for organic electronics have found application most significantly in organic light emitting diode (OLED) displays, which are now ubiquitous in cellphones, but also as photovoltaic materials and as components of detectors, sensors, and electrodes.

Marder is part of an interdisciplinary team that tries to understand from first principles how to design and synthesize materials that enable these applications. He attributes his success to working closely with many researchers throughout the globe — most notably a team at Georgia Tech with whom he has worked on average over 25 years. The team includes Joseph Perry, Jean-Luc Bredas, Bernard Kippelen, and John Reynolds. Marder’s work has resulted in over 475 papers that have been cited more than 38,000 times, and he is an inventor on 39 issued patents, many of which were licensed.

“I think within our team there is a sense that there is something bigger than what we each individually do in our research group that’s important,” Marder said. “We’re also very grateful to be at an institution where the desire that we have to contribute to the institution can be realized. That’s one of the things that I find extraordinarily attractive about being at Georgia Tech.”

"Seth Marder is a world-renowned educator and researcher whose work focuses on the interactions of light with matter, most notably in the setting of organic electronic and photonic materials. Seth serves the local and global communities in innumerable ways, such as through his focus on education, his simultaneous leadership of multidisciplinary research centers, his commitment to faculty mentoring and career development, and his tireless advocacy for inclusive excellence at all levels. We in the College of Sciences are fortunate to have in Seth a colleague who thoughtfully inspires us to reach not just for the moon but for the stars."

The Importance of Giving Back

In addition to his stellar record in teaching and research, Marder is known across campus for his tireless service work. He is often called upon to serve on committees and task forces, because of his reputation for offering a fresh approach, the ability to cut to the heart of a problem, and a communication style that is considered honest — or even blunt. He is dyslexic, and he believes that it influences how he approaches problem-solving.

“The mind thinks differently [if you are dyslexic],” he said. “We see the world differently, and we see patterns that other people often don’t. Dyslexia makes it more difficult to do certain things that other people can do easily. But it enables us to make contributions that other people likely wouldn’t. When you add someone like myself to a team, there’s going to be a bit of an oddball way of thinking that sometimes really helps. Consequently, I very much enjoy having the chance to work with people who have diverse ways of thinking about things. They learn from me, and I learn from them.”

Marder said being a professor is a tremendous opportunity to learn and contribute to many facets of the Institute’s activities; therefore, he views his service work as a way to learn and get to know many extremely talented people on campus who work on areas pertaining to diversity, international affairs, staff development, industrial relations, and other topics.

He has mentored more than 150 graduate students, postdocs, and research scientists in his group over the years, many of whom are now leaders in industry and academia around the globe. He also mentors staff and faculty members.

“My job in my capacity as a professor, particularly at this point in my career, is largely to enable other people to achieve what they hope to achieve, and help them aspire to achieve more than they thought was possible,” he said. “In that regard, I ask myself if there are people around me who are now doing things that they would not otherwise do because I helped facilitate that by either encouraging them to do that, creating the opportunity for them to do that, or teaching them how to do that.”
Marder said the Distinguished Professor Award is, at some level, a testament to what one can do at a place like Georgia Tech.

“We get to have an impact, and people pay us to do it. That’s a pretty good gig.”

PHOTO CAPTION
In 2008, Marder (left) and Yanrong Shi, a graduate student, examine the separation of compounds for photonics applications being done by community chromatography.

EDITOR'S NOTE: This article was adapted from the story by Victor Rogers published on April 2, 2018. 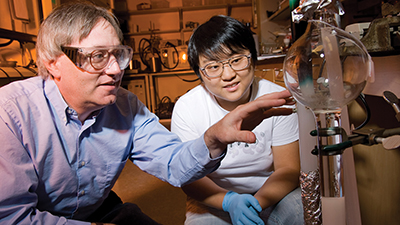