A Taste of Science and French Culture

Study-abroad students learn in and outside the classroom

Since the program began in 2012, it has attracted more than 170 students. While in Lyon, students took courses in chemistry, biology, or French at Lyon’s École Supérieure de Chimie Physique Électronique (CPE). They interacted with French students and faculty at CPE, sharing the spirit and culture of Georgia Tech with their hosts.

Ferguson Beardsley appreciated the program’s mix of science and culture. “The BEST Program not only challenged me by placing me in another country; I also learned how to balance learning inside the classroom with learning outside of CPE,” said the second-year chemical engineering major. “It was the perfect experience to learn chemistry in a different cultural environment.”

This year, the program was sold out. College of Sciences majors made up 72% of the cohort; women made up 79%.

The program included excursions to locations of interest: the Pasteur Institute in Paris, CERN, the winemaking Beaujolais region, and a fragrance and personal care chemical company in the Provence region. Students also visited caves in the Ardeche region, which contain some of the world’s best preserved examples of prehistoric art.

It was my first time with the program. I was particularly struck by the visit to Grenoble and the nearby French Alps.

Grenoble’s cable car takes passengers from the city to the Grenoble Bastille. Overlooking the city, the old military fortress is now home to a museum, restaurant, and monument to the famous French geologists of the Alps. The Bastille is also the trailhead for hiking trails to Mount Jalla, a peak in the foothills of the French Alps. Near the summit is a monument to the mountain troops of France. Lookouts along the trail give breathtaking views of the city below.

In Paris, the group visited the resting place of French royalty, at the Cathedral of St. Denis, near the end of the no. 13 Métro line. The church contains the remains of most of the French kings and queens. Unlike Westminster Abbey in London, this church is far from the center of Paris. It evokes the image of a detached and elitist French aristocracy.

Smiling down on the unassuming sarcophagi of Marie Antoinette and Louis XVI is as satisfying as it sounds! The crypt beneath the church includes an ancient Roman cemetery containing the remains of St. Denis himself.

The BEST Study Abroad Program will resume in summer 2019. For additional information, see the BEST Lyon website or Facebook page. 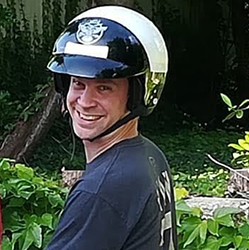 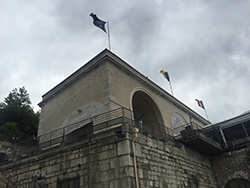 The Bastille (by Michael Evans) 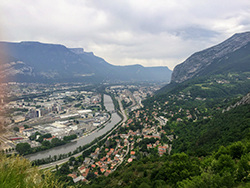 View of Grenoble (by Michael Evans) 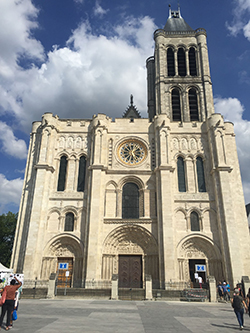 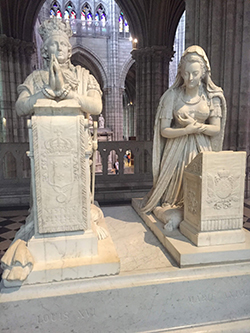