Since winning a National Science Foundation CAREER Award in 2012, School of Mathematics professor Dan Margalit has leveraged funding to stage five topology workshops, each designed for students interested in that field of math.

In the midst of the Covid-19 pandemic, this summer Margalit joined 13 fellow mentors and 57 math students from around the world for the first online-only Georgia Tech Topology Student Workshop, held across the week of June 8-12. After pushing past concerns about frozen screens and reduced student interaction in the online format, Margalit shares that the new workshop went smoothly and was quite a success.

"I got to interact with so many people from diverse backgrounds and I learned so much math from all the excellent talks that I listened to. I learned how to give a good talk, and your suggestions at the talk workshopping session were very helpful. I felt as though I belonged to the math community. I feel a lot more prepared and confident entering the job market this year, all thanks to the workshop. I feel as though I have grown as a human being. A math conference has never had such an effect on me before."

“It went really, really well,” Margalit says of this year's workshop. “I get that the students want to see each other and hang out in the dorms or in person. That’s important. But as far as teaching and other components go, it may turn out to work better than the usual things."

Margalit says that’s because the workshop offered up sessions related to topics outside of math, such as work-life balance, job searches, and effective communications. Current events and social unrest also prompted the addition of sessions to discuss being a person of color, and women in mathematics.

Of course, many sessions focused on the latest research in topology: the study of objects with properties that can be bent, twisted, stretched, and otherwise deformed without tearing or breaking its surfaces. Topology applications include string theory in physics, “big data” analysis, and machine learning.

We spoke with Margalit about this year's topology workshop and what lessons he and other faculty can glean from staging a weeklong virtual gathering of students and mentors.

What was involved in organizing this online topology workshop?

The organizers included myself and three students from Georgia Tech: Caitlin Leverson and Marissa Loving, both post-docs. Also Becca Winarski, who just took a job at Holy Cross — she was one of my first graduate students. She graduated in 2014 and helped with our first topology workshop in 2012.

There were a lot of things to organize — planning what the sessions should look like, planning social events, etc. The five of us met frequently. We had a model. We had done it four times before, but never online.

We really kind of went all out. It wasn’t "open to the public", but "if you accept, we hope you’ll come to everything". So we had sessions on the experiences of people of color in math, on what to expect during the job hunt, the habits of mathematicians. We had breakout sessions on work-life balance, and being a woman in math.

Students were put into randomized sessions every ten minutes, so you really got to meet everybody. We had office hours, where I would say, ‘I’m up early, I’m here on Zoom,’ and people would come and ask questions. My students organized three social events, one like an icebreak, but also trivia and game nights. We had tea time, and Vinyasa yoga a couple of mornings. All of that helped foster community. We had different people every time. This way it wasn’t the same groups for five days.

How did you help the students learn effective communications techniques during this online workshop?

Communications has been a focus the last couple of times we’ve done the workshop. The highlight for me has always been when students give talks at the end of the week. We only had time for ten talks this year because of our limited schedule.

On the first day, we presented on how to give a good talk. We had a worksheet with nine things on it: what draws an audience from the beginning, where’s the tension in your talk, things like that. Then we workshopped. (Cornell’s) Katie Mann, another organizer, took the first talk she ever wrote, and we workshopped that.

During the week we had them in groups, so each of the ten speakers were paired with four to five participants who were not giving talks. They met a few times during the week to workshop things and make the talks better.

The goal is to change attitudes and get people thinking about how to be successful in math. The idea is you can improve yourself by asking for help and thinking critically about your talk.

Were there times when the pandemic directly influenced the materials you presented during the workshop?

We talked about how the job market would be really tough with the pandemic. We also talked a lot about the fact that they’re not all going to get jobs in academia. In 2012 I was telling people, ‘if you want to do it, you’re going to make it.’ Now we’re telling people there’s not going to be enough jobs, so we dealt with overcoming the stigma of leaving academic pursuits. We had a career panel with six people, all from totally different careers not involved in academia.

Four of them were from our first workshop. It was amazing to me to see people I mentored eight years ago coming back. That felt really satisfying. One of them got a job at the National Security Agency because he met a friend of mine who worked there. She got an internship, and is now an employee.

How did the video platform and other technologies hold up with 57 students attending online from all around the world?

There were no major mishaps. Maybe some tiny mishaps, but it all worked. We set up [the virtual] meetings and people showed up. We put them in breakout rooms, asked questions, staged discussions.

I was worried — staying up late at night worrying about internet connections, or worried about people getting accidentally kicked out of a meeting — but none of that happened. It all worked.

What are the biggest lessons for you on staging a virtual topology workshop for the first time? How would you apply those to remote learning for a semester?

The biggest lesson is that we could not have enough structured scheduled opportunities for informal human interactions. That was because we added tea times and office hours at the end of the week, and because we were really enjoying it, and people really wanted to chat.

In the mornings for the first half of the week, we had the ‘room’ kind of loose so organizers could scheme and plan, and then we let everybody in the room. Later in the week, we opened the room early and if people wanted to come in and chat, they could do that. Or we put them in breakout rooms. The questions could be about math or life. It can’t just be about the session. You have to have that virtual ‘hallway’ where you chat after sessions. No matter how we did it, people just ate it up.

The tea times? We thought those might be awkward, but they were just awesome. People loved meeting each other and sharing laughs.

We tried to be understanding. For me, separately from the online part of this, is about the conference acknowledging the humanity of being a mathematician. When you meet with your advisor, you’re going to talk about theorems you’ve proven, etc. What strikes me is every time we do this conference, there’s a thirst for talking about things like imposter syndrome, or what it’s like to be a person of color or a woman in math. It’s very cathartic and nourishing to be able to have these discussions, and in the future we’ll continue them. 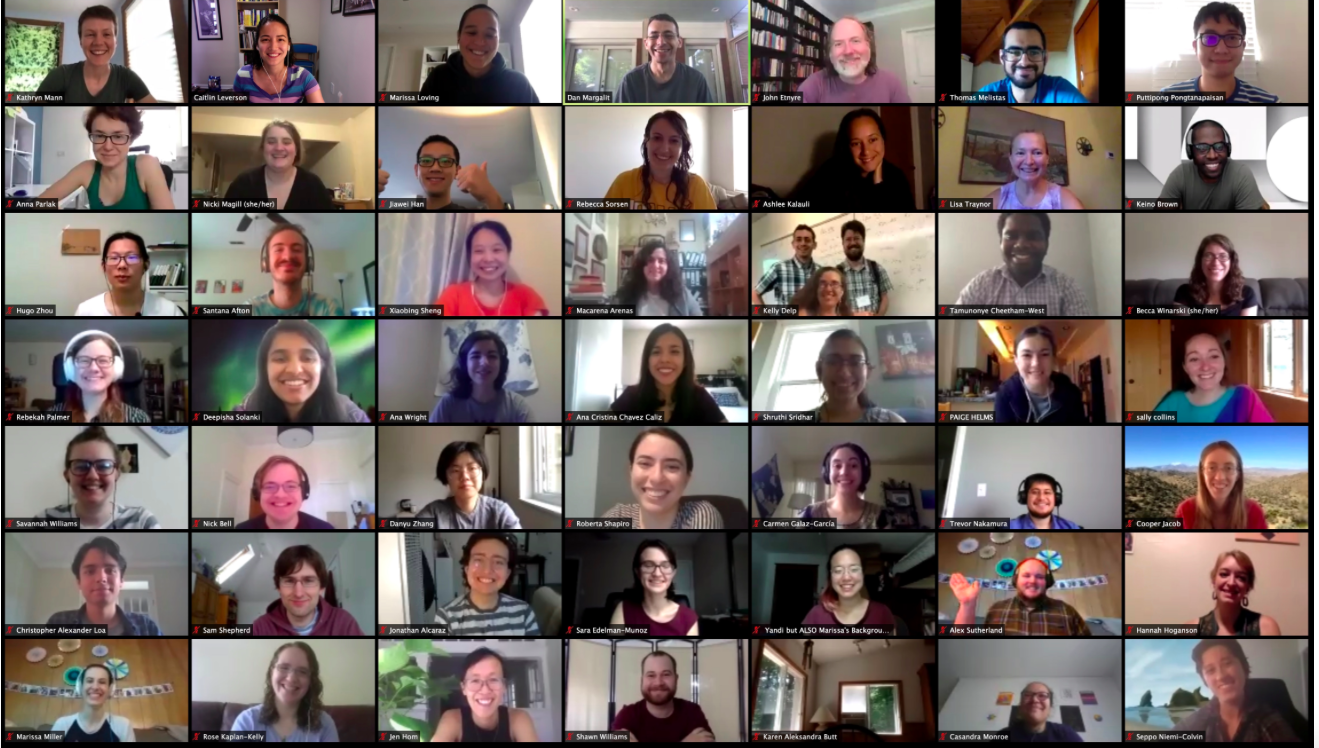 Students from around the world took part in the Georgia Tech Topology Student Workshop June 8-12. 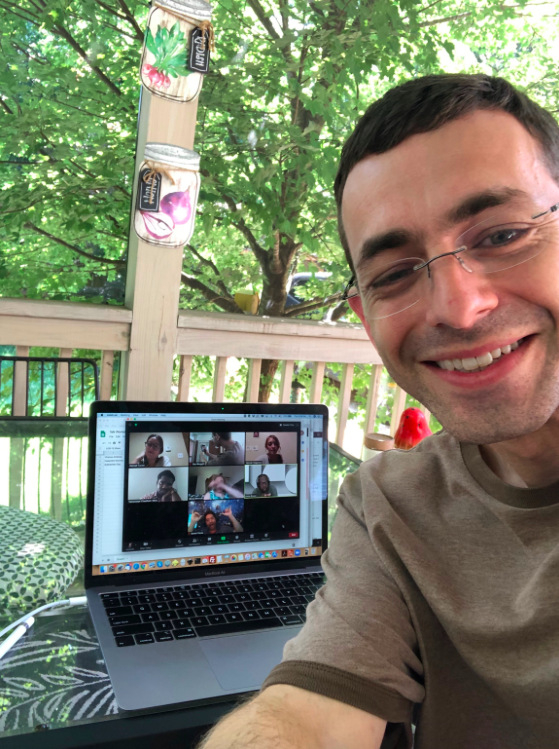 Dan Margalit, professor in the School of Mathematics, led the Topology Student Workshop. 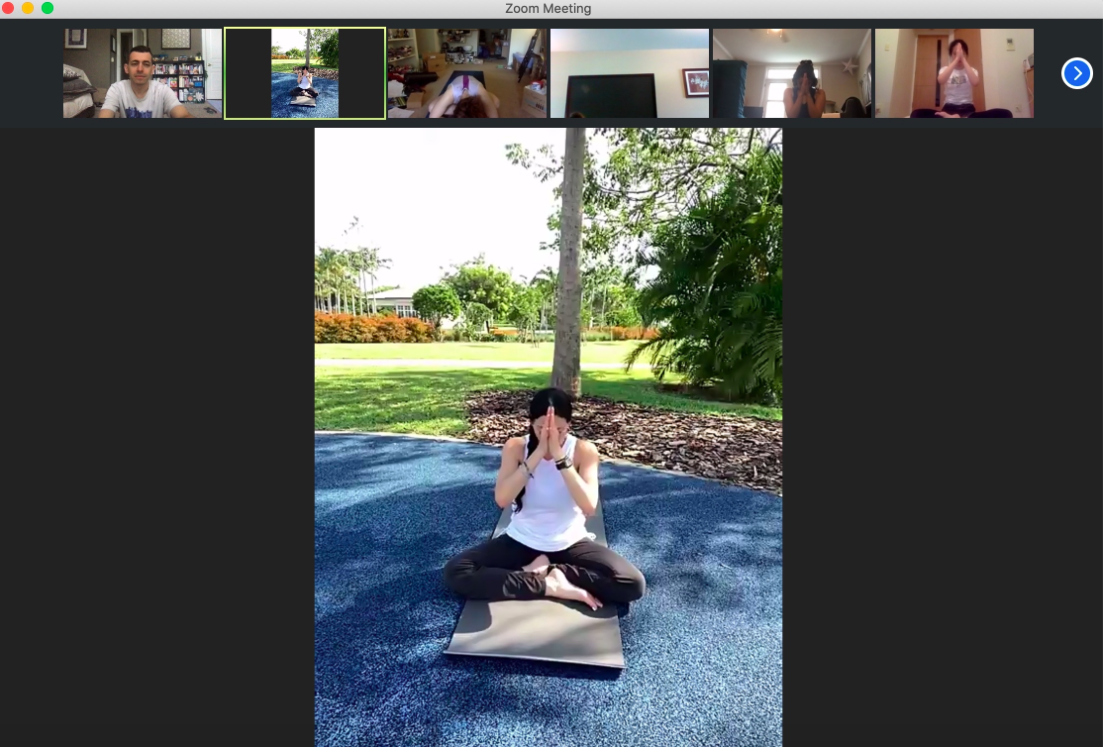