An Unexpected Epicenter of Earthquake Activity

This story by Monica Elliott originally appeared in the Winter 2017 Issue of Georgia Tech's Alumni Magazine.

Many of us grew up thinking of California as the epicenter of most earthquake activity in the United States. (It’s really Alaska.) But today, in the contiguous U.S., most of the major tremors—magnitude 3 or higher—actually occur in Oklahoma. And these tremors don’t appear to come from wholly natural causes.

“Most of this seismic activity is man-made or induced,” says Zhigang Peng, a professor of geophysics in Georgia Tech’s School of Earth and Atmospheric Sciences.

Peng says that humankind has been proven to create earthquakes in three different ways: the construction of reservoirs or other surface-loading excavations; the direct extraction of natural resources, such as coal and oil from the earth; and the injection of fluids into the earth.

However, Peng says a major misconception about induced earthquakes in the U.S. is that they’re primarily caused by the process of hydraulic fracturing, or fracking, to obtain oil and natural gas trapped in the earth. Fracking involves pumping high-pressure fluid into the ground with enough force to break open layers of rock so we can access those natural resources.

Most of the earthquakes in Oklahoma and southern Kansas that researchers believe are induced are not directly caused by fracking itself, but instead by attempts to dispose of the wastewater at the end of the process by injecting it back into the ground, Peng says.

“The fracking process normally takes a short amount of time—maybe a few hours to a few days—to gain access to oil or natural gas,” Peng explains. “If everything works fine, you start to turn the fracking well into a production well. The production well will usually last for at least a few years if not longer, and during this process, a lot of extra things come out of the earth—most of them things you don’t want, like salt water. The easiest and cheapest way to dispose of this fluid is to inject it back into the earth.”

But to reach the type of rock formation that will consume it and to avoid contaminating aquifers, this wastewater must be injected back into the earth at a much deeper level than the fracking and production wells—which creates a seismic problem.

“The wastewater settles in a formation named Arbuckle that includes limestone and other sedimentary rocks with a lot of porous space because you want to have a layer that can suck a lot of water,” Peng says. “This layer sits right on top of the basement rock where most induced earthquakes occur.”

With the help of some of his students, Peng is studying high-rate injection wells in northwest Oklahoma where the U.S. Geological Survey forecasts the highest chance of earthquake damage in 2017.

According to the Los Angeles Times, the Sooner state had only two to three earthquakes a year that reached 2.7 or greater from 1980 to 2000; but in 2015, there were 4,000 of that magnitude. That number decreased to 2,500 in 2016, which Peng postulates is likely due to tighter regulations and the decrease in oil prices leading to less fracking activity and resulting wastewater injection.

Among other things, Peng is studying why wastewater injection wells cause so many more earthquakes in Oklahoma than in any other part of the country. The factors he’s researching include injection rate, total volume injected and the presence of subsurface faults large enough to produce earthquakes that can be felt by man.

INTO THE EARTHQUAKE HOT ZONE

In October, on a trip funded by the School of Earth and Atmospheric Sciences, Peng and some of the Ph.D. students in his earthquake physics course went to that hot zone in Oklahoma—places in and around the towns of Alva, Moreland and Fairview—and deployed some 20 seismic sensors to measure the activity.

“We think we have pretty clear evidence saying wastewater injection and those induced earthquakes are related,” Peng says. “Fortunately, the state of Oklahoma also recognizes it’s a big problem. But there are still many open questions.”

Peng says the state is providing resources to help with their studies. Two staffers from the Oklahoma Geologic Survey and several University of Oklahoma students joined Peng and his students during the last deployment, as did two representatives from the company that provided the seismic sensors for the study, Seismic Source of Ponca City, Okla.

“The field deployment really highlighted the complexities of seismology and earthquake physics,” says Tech doctoral student Louisa Barama. “Over a few days, we set up stations in the same region but were surprised by the small differences each location had, from soil type and surrounding landscape and even picking station location.”

Kai Hu, another PhD student, adds that their team also had a chance to communicate and interact with the local people who were well aware of all the seismic activity. “We let them know how the earthquake monitoring network can be used to advise and inform the government and oil companies to regulate their injection practices,” Hu says.

The largest earthquake registered in the region was a 5.8 in October 2016 near Pawnee, Okla., causing injury and damages. However, the vast majority of the tremors remain small, though still concerning.

According to Peng, there are two schools of thought on whether these induced earthquakes can cause larger, more dangerous earthquakes. Some believe it depends on the size of the perturbed area—if only a small, confined area is perturbed, only a small event could result, so the maximum size is limited. But the other argument is that once an event is triggered, no matter how small, that event could trigger an even larger event.

“We’ve actually seen signs of this type of domino effect,” Peng says. “And in that case, once you start something, it’s not controlled by the region of perturbation, it’s controlled by tectonic loading. That means if the region is already stressed out and you trigger something and it goes into this domino effect you may trigger something much bigger than your initial perturbations.”

“You can’t just say to companies, ‘Don’t do it,’” Peng says. “We have to have energy, but we have to find a way to do it so that we don’t potentially cause problems. Nobody wants to trigger a damaging magnitude 7 or 8 earthquake. In that aspect, we’re all on the same page.”

A RESERVOIR OF POSSIBILITIES IN CHINA

In addition to his work on earthquakes induced by wastewater injection, Zhigang Peng is conducting research on reservoir-induced earthquakes in the Sichuan Province of China where he grew up. He’s focused on the magnitude 7.9 Wenchuan earthquake that occurred in May 2008—the largest and most devastating earthquake in China in the past 40 years.

A few years before the earthquake, the Zipingpu dam and reservoir was built within 10 kilometers of the epicenter of the event. There has been a long debate on whether the reservoir triggered the 2008 earthquake. Peng is currently working with scientists in China to re-examine the seismic data near the epicenter to find answers.

Peng is presenting his research this month in New Orleans at the Annual American Geophysical Union Meeting, the largest conference for geophysicists in the world. If his findings establish a connection between the reservoir and the 2008 earthquake, it would be the largest confirmed human-induced earthquake on record.

MAGNITUDE is the most common measure of an earthquake’s size. It is a measure of the size of the earthquake source based on the maximum motion recorded by a seismograph or seismometer. It is the same number no matter where you are or what the shaking feels like.

ABOUT 16 MAJOR EARTHQUAKES, including 15 earthquakes in the magnitude 7 range and one earthquake magnitude 8.0 or greater, are expected to occur each year. 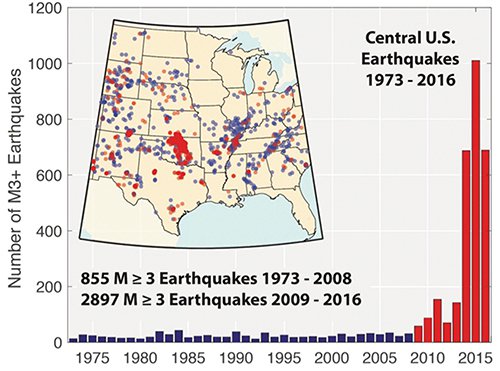