Imagine you’re a drone hovering over Tech Tower. If someone asks which way to Tech Square, you would point in the right direction accurately, because you can see the whole lay of the land unobstructed. On the ground though, barriers exist between Tech Tower and Tech Square. You may point in the general direction, but you would likely be inaccurate.

How navigation manifests in the brain

Studies using rats have shown that navigation in open environments creates a honeycomb-like grid of brain activity. The activity is much like the grid lines on a map with a six-arrow compass and occurs in the entorhinal cortex, a region of the brain’s memory system. In effect, the brain maps an open environment in hexagonal units arrayed like a honeycomb.

When barriers are present, the neural map breaks into fragments, each mapping only the space between the barriers. So instead of one honeycomb-like grid stretching from Tech Tower to Tech Square – as we would draw on a physical map – the rodent brain shows smaller maps corresponding to the different open spaces between the two locations. Instead of a singular map from Tech Tower to Tech Square, the rodent brain has several fragmented maps.

Does the same thing happen in humans? If so, our brains needing to piece together different maps could explain why we struggle to point accurately between two locations separated by barriers

The experiments using rats could not be easily replicated with humans, until now, with help from virtual reality technology and neuroimaging. Qiliang He, a postdoctoral researcher, and Thackery Brown, an assistant professor in the School of Psychology, confirm that signals resembling a honeycomb grid related to navigation in open environments also exist in human brains. In the presence of barriers, the honeycomb-like grid signals also collapse.

The brain activity of someone walking in an open space would draw arrows along six directions, corresponding to the honeycomb grid, as the person moves along. He and Brown discovered that, when barriers are present, the brain maps only the open space in between and with arrows along only four directions. This finding shows that, like the rodent brain, the human brain struggles to draw grid lines from one side of a barrier to the open space on the other side.

Brown says, the results have implications for training in spatial navigation and early detection of diseases that manifest in spatial confusion, such as Alzheimer’s. The findings were published today in Current Biology.

“We didn’t know if those grids exist in humans when you’re following a route,” Brown says. “How could we ask that question for humans? To study them in rodents, we have to put electrodes into the brain. To study them in a physical environment in humans, we would need some kind of portable neural recording device of high enough resolution.”

Instead, Brown and He created a virtual reality environment. Within that virtual reality, He developed navigation tasks that would mirror the environments used in the study of rodent brains. Combined with functional magnetic resonance imaging (fMRI), He visualized the neural maps created by open and obstructed spaces.

Study participants lay in the fMRI scanner with a mirror to their face. They were unable to turn their head but could navigate, using controllers, a virtual path projected to them. The fMRI signals showed the honeycomb grid-like activity and how it changes when the environment is obstructed, Brown says. “We were the first to show that they are broken by barriers.”

These findings suggest the potential use of virtual reality to improve spatial memory, Brown says. In virtual reality, you can take a real environment and make the walls all transparent. That could make the brain construct a grid across the environment as if it was barrier-free. The hope is that the constructed grid would persist – that the mental map for the open space stays with the person in the real world.

Another potential application could be in diagnosing Alzheimer’s. “The first part of the brain the disease hits is the entorhinal cortex,” Brown says.  “One of the first symptoms is spatial disorientation. Virtual reality with fMRI could help us get a behavioral measure for whether someone is starting to show symptoms of Alzheimer’s, and measuring a breakdown of the spatial map in this way could help explain why we see those symptoms.” 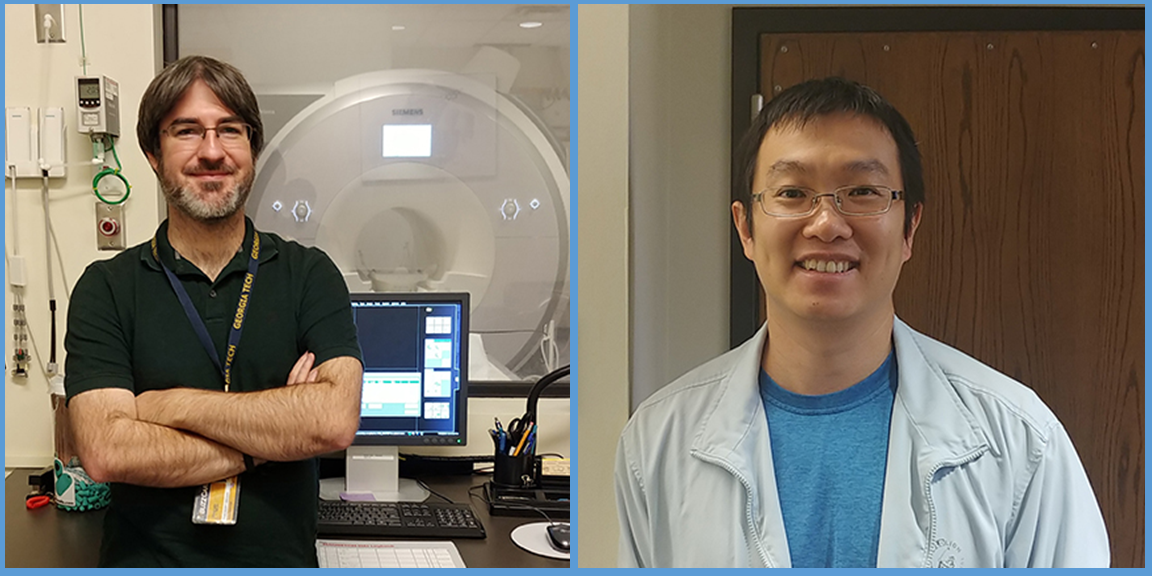 Thackery Brown and Qiliang He