A galaxy’s size can be enough to stagger the imagination. Now try to imagine galaxy clusters, the largest gravitationally bound structures in the universe, dotted with hundreds to thousands of galaxies and permeated by large amounts of hot, X-ray emitting plasma.

One of the mysteries inside those clusters is how super-hot and super-cold materials co-exist inside them — and a possible solution explaining the dynamic is the subject of a new research article in Nature Astronomy, co-written by two Georgia Tech researchers, Yu Qiu and Tamara Bogdanović, in collaboration with Yuan Li (UC Berkeley), Michael McDonald (MIT) and Brian McNamara (University of Waterloo).

Galaxy clusters are filled with super-hot plasma, known as intracluster medium, that sends out a lot of X-rays. But astronomical observations show that a significant number of clusters also have large amounts of cold gas within their cores. These “cool-core clusters” feature wispy filaments of gas that can extend tens of thousands of light years from their center. Some could be “stellar nurseries” — birthplaces of stars. The article theorizes the causes of those filaments, which have captured the attention and imagination of astrophysicists, are supermassive black holes hidden within those clusters.

The primary author of the paper “The Formation of Dusty Cold Gas Filaments from Galaxy Cluster Simulations” is Qiu, now a postdoctoral fellow at the Kavli Institute for Astronomy and Astrophysics in Beijing.  Qiu started the research while a Georgia Tech graduate student working with Bogdanovic, an associate professor in the School of Physics and the Center for Relativistic Astrophysics. Qiu received his Ph.D. in physics from Georgia Tech in 2019.

Bogdanović says the article addresses the “cooling flow problem” in galaxy clusters and is also related to the co-evolution of supermassive black holes within them. “For almost 30 years now, it has been argued on the basis of data from imaging X-ray telescopes that the intracluster medium (ICM) in the core regions of some clusters is radiatively cooling on time scales shorter than the age of these clusters,” Bogdanović says. But there’s been no evidence of complete cooling of that gas within those clusters. “The resolution of this contradiction has been sought in different heating mechanisms that could prevent the catastrophic cooling of the ICM.”

Qiu’s research focused on the Perseus cluster, one of the largest galaxy clusters, located nearly 250 million light years from Earth. Are the gas filaments extending from the cluster capable of birthing stars, much like the Pillars of Creation dust and gas clouds, famously captured by the Hubble Space Telescope?

“They are very similar in the sense that both consist primarily of cold gas, less than several thousand Kelvin, and when cold gas gathers in clumps, it can lead to the formation of new stars,” Qiu says. “However, the cold gas filaments observed in galaxy clusters, such as the Perseus cluster modeled in this work, expand more than 100,000 light years beyond the nucleus, and are larger than the host galaxy.”

“Unlike the Pillars of Creation, which is likely created by an expanding bubble irradiated by a massive star, the vast scale and the prevailing radial structure of these filaments indicate that they are driven by a much more energetic source, which we think is the central supermassive black hole.” The research examines the process for how black holes could help create those filaments.

That involves a closer look at what Qiu discovered to be an important part of the process: active galactic nucleus (AGN) feedback. AGNs are active regions in the centers of galaxies, and they throw off a lot of light and gas.

“It has been widely acknowledged that AGNs are associated with growing supermassive black holes,” Qiu says. As a black hole attracts matter from the surrounding material due to its gravity, that matter forms an accretion disk near the black hole. It can convert part of that energy into radiation and gas outflow.

Qiu’s research uses 3D radiation-hydrodynamic simulations and reveals a possible new mechanism, a combination of the cooling that happens to gas filaments as they flow outward from the cluster center, and what’s called ram pressure – the “headwind” that impacts those filaments as they race through the ICM plasma.

This new mechanism, “naturally promotes outflows whose cooling time is shorter than their rising time, giving birth to spatially extended cold gas filaments. Our results strongly suggest that the formation of cold gas and AGN feedback in galaxy clusters are inextricably linked and shed light on how AGN feedback couples to the intracluster medium,” Qiu writes in the article.

“By accounting for these physical phenomena in the context of a galaxy cluster, Yu reproduced many of the observed properties of the cold gas filaments and the surrounding X-ray emitting ICM,” Bogdanović says.  “This gives us confidence that this model is on the right track and provides a more realistic description than some earlier models, where AGNs played a passive role or were unimportant altogether.”
Could this research tell us more about process of birthing stars, or even galaxies?

“What this study focuses on is how outflows powered by the central supermassive black hole facilitate the formation of these filaments,” he adds. “Because the creation and evolution path of the filaments have a great impact on the properties of the cold gas within, the ideas advanced in this work can in principle help us better predict how and when stars may form in them.”

The formation of dusty cold gas filaments from galaxy clusters, Nature Astronomy, May 4, 2020

Funding source(s).
Y.Q. acknowledges support from the National Key R&D Program of China (2016YFA0400702), the National Science Foundation of China (11721303, 11991052), and the High-Performance Computing Platform of Peking University. T.B. thanks the Kavli Institute for Theoretical Physics, in Santa Barbara, CA, USA, where one portion of this work was completed, for its hospitality. Support for this work was in part provided by the National Aeronautics and Space Administration through Chandra Award Number TM7-18008X issued by the Chandra X-ray Center, which is operated by the Smithsonian Astrophysical Observatory for and on behalf of the National Aeronautics Space Administration under contract NAS803060. This research was supported in part by the National Science Foundation under Grant No. NSF PHY-1748958, and in part through research cyberinfrastructure resources and services provided by the Partnership for an Advanced Computing Environment (PACE) at the Georgia Institute of Technology, Atlanta, Georgia, USA. Any opinions, findings, and conclusions or recommendations expressed in this material are those of the authors and do not necessarily reflect the views of the Smithsonian Astrophysical Observatory and or the National Aeronautics and Space Administration. Illustration courtesy of the Chandra X-ray Observatory Center, which is operated by the Smithsonian Astrophysical Observatory on behalf of NASA, and the Georgia Institute of Technology. 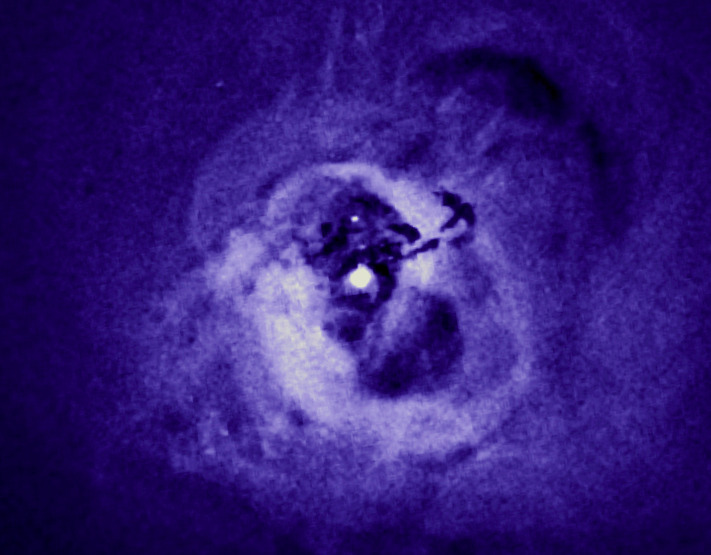 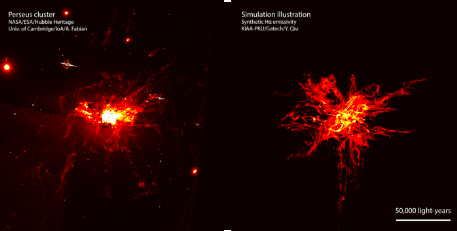 Comparison of the Hubble Space Telescope observation of the filaments in the Perseus cluster (left) with the Yu Qiu research team's thermal energy illustration of the simulated cluster (right). 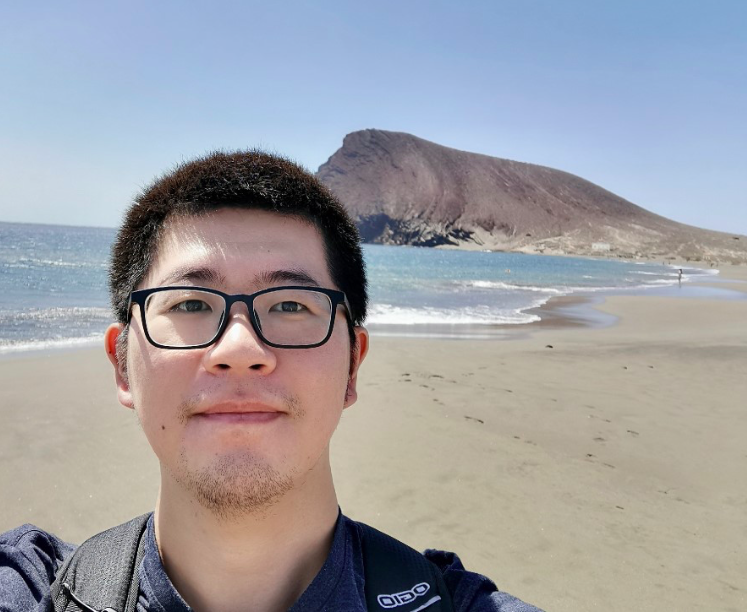 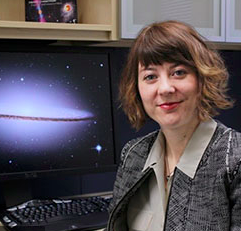