When Zachary Hopton began his first semester at Georgia Tech, he quickly realized that his degree program was going to be a bit atypical. He wanted to find a major with a scientific and technical focus to complement his interests in linguistics, but was unsure what that perfect major would be.

Initially, Hopton considered majoring in mathematics, computer science, and biochemistry, but none of them felt right for his interests and envisioned career path.

“I just wanted to figure out what perspective sort of worked for me to look at language at,” shares Hopton. “Eventually, I ended taking a psychology class on human language processing, and I realized it was psychology.”

In the class taught by Daniel Spieler, associate professor in the School of Psychology, Hopton says that he found himself fascinated with “how our brains have produced language as such an intricate thing that sets us apart from so many other species.”

The course also included neuroscience, biological, behavioral, and experimental components, which Hopton says showed him that the flexible nature of psychology would make it the best degree for his interests.

With his major officially declared, Hopton decided to explore research pathways to further enhance his education. Though there were no available undergraduate research opportunities directly related to language and cognition at Georgia Tech, Hopton realized that cognitive psychology research would provide valuable insight to increase his understanding of brain processes.

“One of the things that interested me in psychology so much was the fact that the biological basis for language was crazy to me,” remembers Hopton. “That applies to other areas of cognition as well, like, memory, retention. The way the brain works is similar, regardless of what area of cognition you’re in. So I figured that was good experience for me to have, even if I changed the exact path later.”

In his sophomore year, Hopton began research in associate professor Audrey Duarte’s Memory and Aging Laboratory, where EEG (electroencephalogram) and fMRI (functional magnetic resonance imaging) studies are used to analyze behavior. Initially, his responsibilities were largely related to recruiting participants for studies, but as he continued to work in the lab, he began to more actively and deeply engage in research.

Recently, Hopton joined a team of researchers led by his graduate student mentor, Taylor James, and Duarte on analyzing the ways that depression affects a specific type of memory throughout the lifespan. He helped collect data from hundreds of articles for nearly a year. The research studied specific variables, but instead of getting lost in the details, Hopton learned the importance of analyzing each unique variable.

“In a clinical setting, for example, that can be the difference between a diagnosis for subthreshold depression for a 50-year-old or maybe some sort of dementia or Alzheimer's,” says Hopton. “Both affect memory, so it’s important to understand if there are differences between them or if depression may be a symptom of early onset dementia.”

Thoughts on the research encouraged Hopton to ask questions on how his discoveries could relate to public policy, technology development, and public health resources.

“If we know that one sort of memory works better for older people, then we have to make sure that if we’re teaching them something or giving them some sort of information that’s important, we make it accessible to them,” Hopton explains. “It’s important that we understand the memory loss symptoms that come with depression because we need to make therapies that accommodate that treat the memory — the cognition aspects as well as the emotional parts of depression.”

These questions and considerations tie into public policy, which Hopton studied in-depth on his spring 2020 exchange semester in Paris, France at Sciences Po, which was compressed due to Covid-19. It was Hopton’s second study abroad program after participating in the French Language, Business, and Technology program.

In fact, after accumulating enough credits in his French courses, Hopton is now undertaking a second major in Applied Language and Intercultural Studies.

Hopton shares that while in Paris he truly began to recognize the balance between experimental psychology and humanities, and the relationship that the two disciplines have with each other.

“For example there was a class I took there on the psychoanalysis of politics,” he says. “That was crazy to me — I never thought about in my life, applying things from clinical psychology — to think about how the government works.”

During his exchange semester in Paris, Hopton immersed himself in Parisian culture and challenged himself to meet new people. Rather than living with the four Georgia Tech students also studying at Sciences Po, he decided to live with roommates from Chile, Spain, Germany, and Ireland.

“That was so cool to me, because at Tech I lived in the  International House for most of college, so I’m used to this environment of constantly having other people from different cultures around me. Even just the action of sitting down for breakfast with another person, I end up coming away from it with crazy information about a different place that I’ve never heard of before.”

In his classes in Paris, the majority of which were taught in French, Hopton noticed that he also had flexibility to customize his studies to his specific interests.

“The professors were there to guide the conversation, but the majority of the classes that I had at that school were student-led and kind of took on their interests,” remembers Hopton.

On a typical day of classes, students would begin class with a presentation on an assigned topic. “They were given a topic to present about, and then they went in their direction just with that topic, and then when they finished the professor would lecture for 10 or 30 more minutes and sort of fill in the blanks,” remembers Hopton.

The class structure surprised Hopton – on the first day of classes, he remembers being unprepared when a professor asked each student to decide on a major project that would determine most of their grade.

“On the first day of class they assigned everyone their work for all of the semester. I didn’t know that was going to happen, I was looking through the syllabi like 'Oh... I don’t know what this work means but I’ll take it, why not.'”

And although Hopton had to return home halfway through the semester due to the spread of Covid-19, he says he looks back fondly on his exchange semester. When he returned to Tech, he was warmly welcomed back to his research lab, where he is currently working on his undergraduate thesis.

Hopton was able to complete that research from home throughout last fall semester.

“It’s fantastic that I already have this relationship with professors and graduate students, and I’ve been working with this study, and now I can just say, 'Okay, well I’m really interested in this aspect of it, and so I’d like to do these different analyses.'”

Hopton decided to complete a thesis after advice from James, who shared with Hopton that her thesis allowed her to build important connections with professors and other members of a lab, while also being helpful for graduate school applications.

For his thesis, Hopton is analyzing how built-up memory relates to one’s ability to learn and retain new information, and if the memory process is different for various ages.

For example, Hopton’s research ponders if a phenomenon, such as seeing an abnormal object in a bathroom, would be difficult or easy to remember. “So if you think about it, you are a person who’s been in a bathroom many times, so you have this built-up knowledge in your memory of what you can see in the bathroom. It wouldn’t be surprising to see a toilet there, a sink, soap, shampoo — but if you were to go into a bathroom and see a blender, that would be really weird. It wouldn’t fit your expectation, based off what you already know. So later on, are you going to remember that the blender was there more than some other thing that belongs in a bathroom, or is it going to be harder to remember because you don’t normally see a blender in a bathroom — so why would you remember that it was there?” asks Hopton.

This idea was first suggested to him by his graduate student advisor, James, who noticed variables during her research that she thought Hopton might be interested in analyzing. She has continued to support Hopton through the process of research and writing.

Hopton is also advised by Duarte, who he meets with weekly to discuss his thesis, and who he shares has also been instrumental in his research experience.

“It’s been nice. She knows me — she knew me before I did my thesis as well,” says Hopton. “And then, now that I’m doing my thesis with her, she provides a lot of intellectual support. She’s very good with explaining how concepts apply and making them relevant to you personally.”

Hopton also took a behavioral pharmacology course with Duarte, where, on the first day of classes, students were welcomed into the lecture hall by a Gregorian chant playing out of the speakers.

“The Gregorian chant was because she was explaining the history of pharmacology and she wanted to talk about a nun in the 13th century who did all this research on herbal remedies and their psychoactive properties,” he remembers. “She was also a musician, and Dr. Duarte wanted to play her music for us to tie it in. It was clear when she got up to the podium that she was having a good time and enjoying what she was teaching about — so it was a great class.”

Along with Duarte and James, Hopton has received support and guidance on his thesis from Spieler and Lelia Glass, assistant professor of Linguistics and coordinator of the Linguistics Program.

The collaborative nature of his thesis project has allowed Hopton to combine important independent study with advice and support from experienced professors and students. He also appreciates the interdisciplinary nature of his thesis, which was his initial impetus for choosing a degree in psychology.

Hopton notes that “the interdisciplinary nature of the thesis, for me, is the biggest thing. It’s gotten to bring in neurosciences aspects, behavioral aspects — still psychology, linguistics as well — and I’m using computer science data analysis.”

After graduation, Hopton says he sees his future taking one of two paths. On one route, he sees himself attending graduate school and working in experimental psychology with a language focus. On the other route, he shares that he is interested in working in public health, particularly the growing field of global mental health.

But before starting on either of those paths, Hopton plans to spend a year abroad teaching English through a fellowship program and experiencing language development first-hand.

“I’ve looked at language from this really structural point of view in my linguistics classes, along with a biological and psychological point of view, but I’ve never really had the chance to see how these perspectives can be put to use,” says Hopton. “One field of applied linguistics looks at how people learn a second or third language, and how that changes with age. What better way to learn that than in a classroom helping people learn English.”

And after his fellowship ends, Hopton hopes that his ultimate career path will be clear.

“If I get there and I’m like dang, I really miss the scanner, or the MRI machine, then maybe neurolinguistics research is the path I’m meant to go on!” 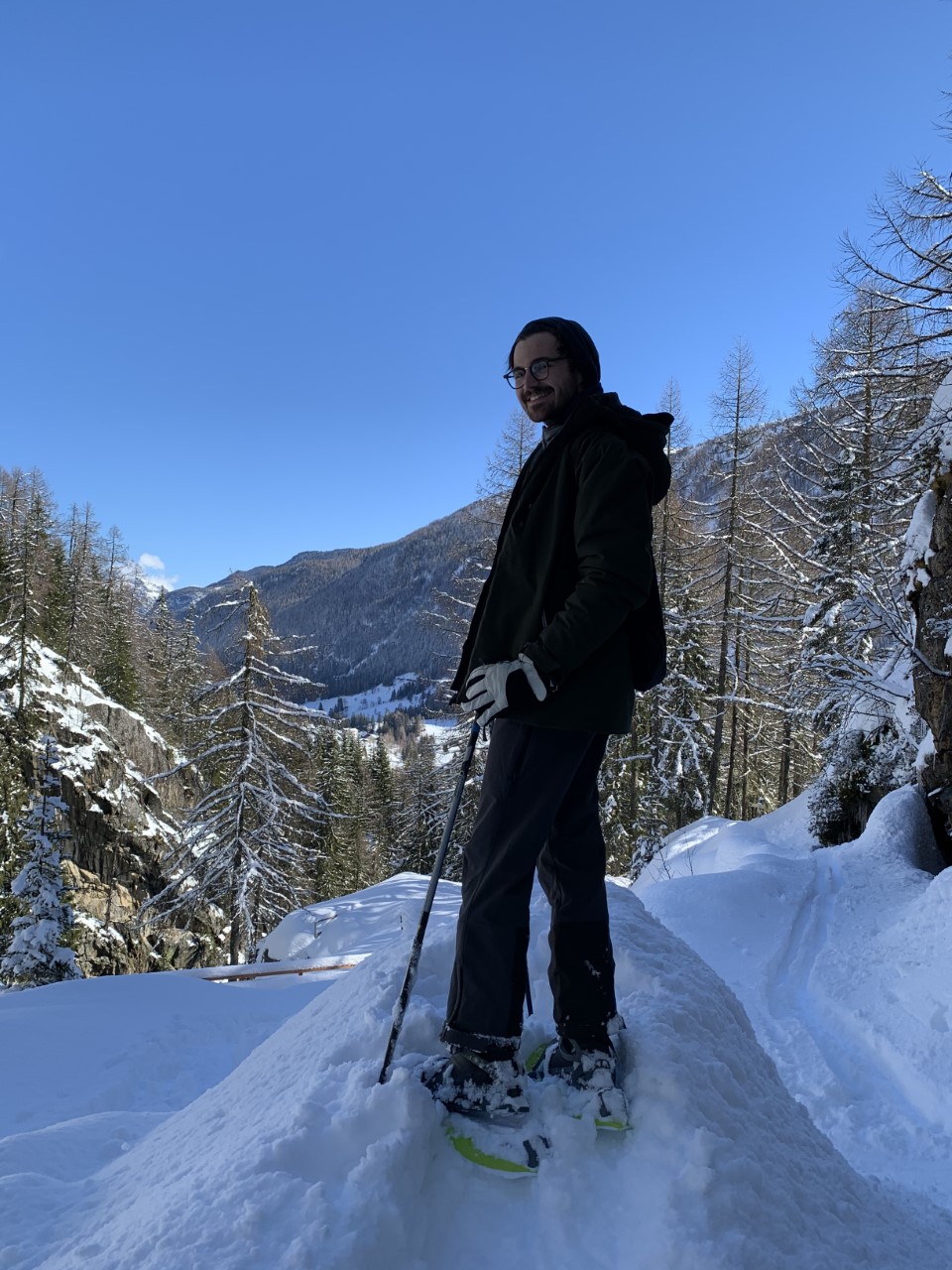 Zachary Hopton, double major in Psychology and ALIS, has conducted research and studied abroad while at Georgia Tech. 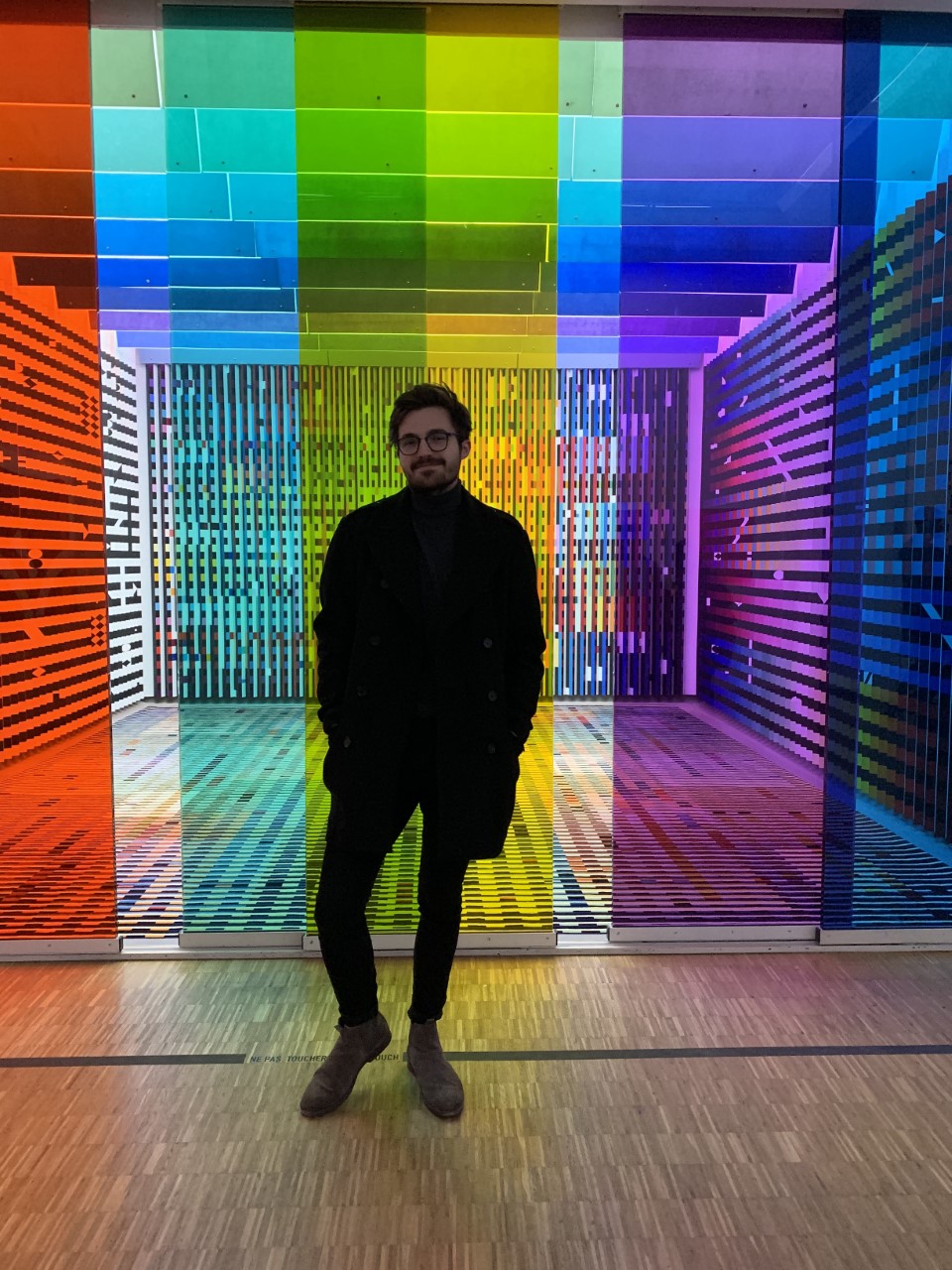 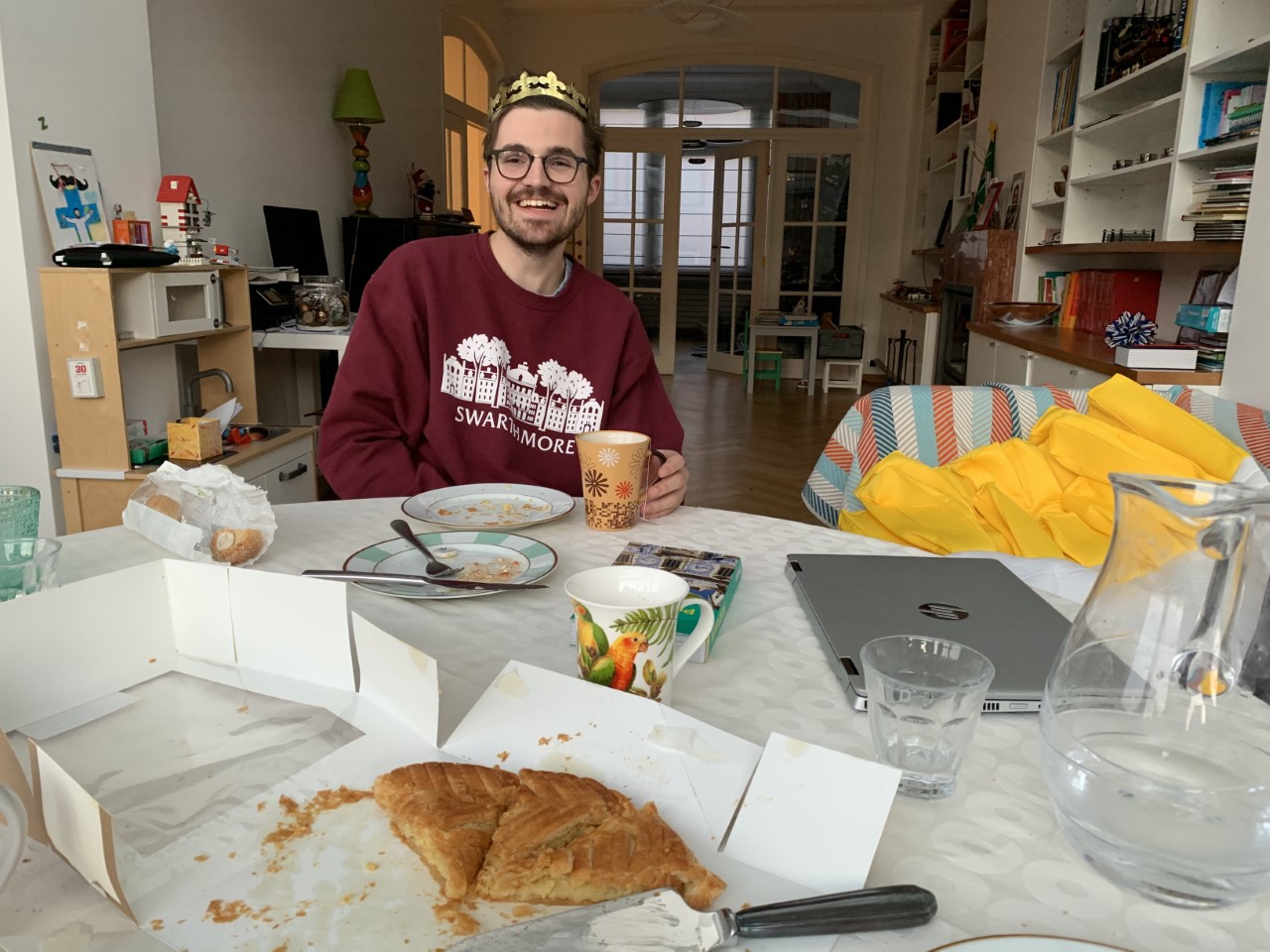 Hopton shares that while studying abroad, "even just the action of sitting down for breakfast with another person, I end up coming away from it with crazy information about a different place that I’ve never heard of before.”