Tackling one of biology’s most fundamental problems

An evolutionary biologist, Ratcliff studies how organisms change over time. In particular, he wants to understand how multicellular organisms can evolve from single cells. This question remains one of the fundamental problems in biology.

His approach is “extremely creative,” a colleague says. “Rather than trying to infer what happened hundreds of millions of years ago, William cut the Gordian knot by evolving novel multicellularity in the laboratory....Few scientists would attempt such an ambitious experiment.”

In a 2016 interview, Ratcliff explained his approach.

“In our lab, we do evolutionary time travel in a test tube, by creating new multicellular organisms, using yeast and algae, in a way that’s simple but which we can examine with huge precision, using all the tools of biology, mathematics, and physics. We’re not trying to explain what happened historically. Rather, we’re trying to show how it can happen in principle.

“We’re interested in how the geometry of cellular clusters influences the outcome of evolution, tipping the balance between cellular cooperation and conflict, and how cells lose their Darwinian autonomy, evolving from individual organisms into parts of a new organism. These are fundamental principles that should be broadly applicable.”

Ratcliff has shown that multicellularity can evolve quickly. The simple multicellular “snowflake” yeasts he has evolved in the lab – by selection for rapid settling through liquid media– possess a multicellular life cycle, reproducing through small propagules, like stem cuttings. Over 1,500 generations, they adapted to the selection pressure by growing faster and evolving a more hydrodynamic shape. They also evolved a simple division of labor, using programmed cell death to sever links between cells and produce more propagules. Experiments with a unicellular algae have yielded broadly similar results.

“[T]his award really reflects the strength of our research community and the benefits of working in an environment so conducive to collaboration.”

From these observations, fundamental insights have emerged about the evolution of multicellular complexity. For example, mutations that are beneficial to the multicellular aggregate but costly to the single cell can accelerate evolution of increased multicellular complexity. In addition, his work has shown how the 3D geometry of yeast clusters allows a rudimentary form of development to arise, guiding the emergence of new multicellular traits from mutations that only directly affect the properties of single cells. Taken together, Ratcliff’s research upends conventional wisdom that the transition to multicellularity must have been slow and difficult and must have required extraordinary conditions.

Ratcliff’s scientific creativity is recognized by generous external support for his research, including the prestigious Packard Fellowship. Even the popular press has noticed: Popular Science named Ratcliff one of the Brilliant 10 in 2016, the magazine’s way of “honoring the brightest young minds reshaping science, engineering, and the world.”

“William has helped define the field of modern multicellularity research,” the same colleague says, “and in so doing, has become one of its leaders.”

“I am of course deeply honored by this recognition” Ratcliff says. “But this award really reflects the strength of our research community and the benefits of working in an environment so conducive to collaboration. Since arriving at Tech in 2014, my research directions have evolved much like snowflake yeast have – in wonderful and unexpected ways. This has been the direct result of having such amazing students, collaborators and colleagues.” 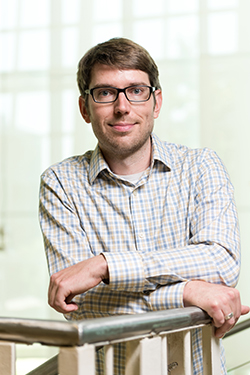