Join us virtually on BlueJeans as Georgia Tech School of Physics professor and Glen P. Robinson Chair in Nonlinear Sciences Chair Predrag Cvitanović and Emory University Senior Lecturer and Director of the Planetarium Erin Wells Bonning explain the 2020 Nobel Prize in Physics. After the presentation, the speakers will answer questions from the audience, so come curious! This talk is open to the public and all are welcome to join.

Half of the 2020 Nobel Prize in Physics was awarded to Roger Penrose for the discovery that black hole formation is a robust prediction of the general theory of relativity.

In 1957 Penrose, then a graduate student, met Georgia Tech’s late David Ritz Finkelstein in a fateful meeting that changed both men’s lives forever after. It was Finkelstein’s extension of the Schwarzschild metric which provided Penrose with an opening into general relativity and set him on the path to his 1965 discovery celebrated by this year’s prize.

The other half of the 2020 Nobel Prize in Physics was awarded jointly to Reinhard Genzel and Andrea Ghez for the discovery of — in Ghez’s words — "The Monster at the heart of the Milky Way," a black hole whose existence had been hypothesized since the early 1970s.

In order to visually observe an object that famously does not emit any light, precise measurements of stars moving in the black hole’s gravitational field had to be carried out. The independent work of Genzel and Ghez mapping the positions of these stars over many years has led to the clearest evidence yet that the center of our Milky Way galaxy contains “The Monster”, that possibly every galaxy contains a black hole, and that the environment near it looks nothing like what was expected. 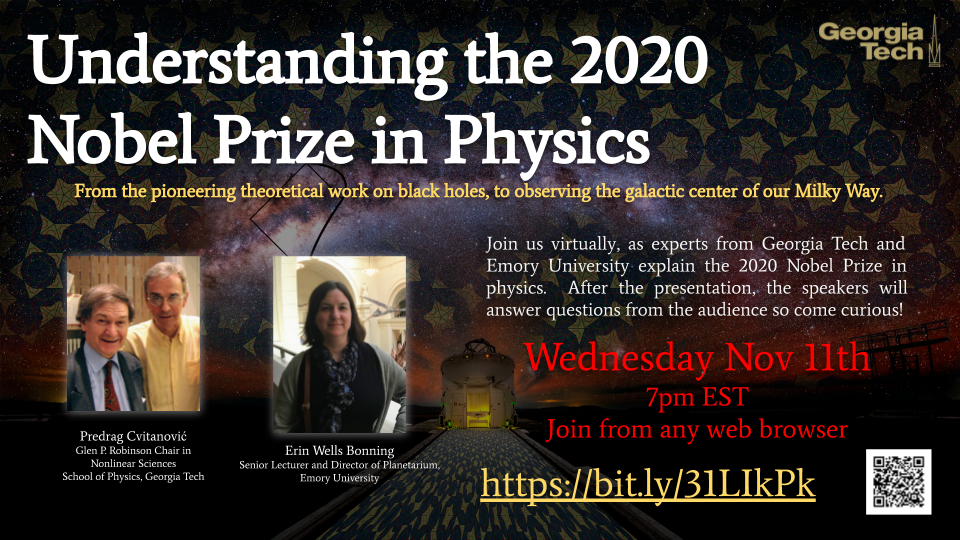 Understanding the 2020 Nobel Prize in Physics