The 2018 Nobel Prize in Physics recognizes two breakthroughs that revolutionized laser physics. Chirped pulse amplification of lasers is one of them. Gérard Mourou and Donna Strickland share one-half of the prize for paving the way toward the shortest and most intense laser pulses ever created by humans.

The winners solved an important problem: how to amplify short laser pulses to high energies without damaging the materials used for amplification.

Evers since lasers were invented, researchers have tried to create ever shorter and more intense pulses. That’s because short, intense laser pulses can do lots of interesting things, like accelerate charged particles or knock out electrons from molecules.

“There are a host of applications in basic scientific research that depend on femtosecond lasers, including time-resolved studies,” says Chandra Raman, an associate professor in the School of Physics.

But ramping up the intensity destroys the amplifying material.

“Laser and laser-amplifier media are more easily damaged by high-intensity laser light than are standard optics such as prisms and mirrors,” says Rick Trebino, a professor in the School of Physics. “They limit the possible intensity achievable.”

Mourou and Strickland solved the problem by first stretching the laser pulses in time, then amplifying them, and finally compressing them. That treatment enabled a pulse to pack much more light in the same space. “Amplifiers based on this idea yield thousands of times more pulse energy,” Trebino says.

Since the breakthrough – now called chirped pulse amplification (CPA) – many generations of scientists have used the tool in research, Raman says. CPA also facilitated the spread of high-power lasers in industry and medicine, including targeted laser surgery and specialized cutting of materials with minimal heating of the surroundings.

“CPA is a clear example of a scientific breakthrough whose influence goes far beyond the field where it originated,” Raman says.

Raman encountered first-generation CPA systems when he was a Ph.D. student studying the electron dynamics of special atoms. He had to build his own system, one that could generate superfast, high-intensity, femtosecond pulses. A femtosecond is one-quadrillionth of a second.

The home-built femtosecond system occupied two optical tables. “The alignments were a bit delicate and finicky, and it was sometimes frustrating getting them exactly right,” Raman says. “But it opened my eyes to how clever and specialized tools can open a vista to fundamental science. I had fun.”

“Because of CPA, much higher laser intensities are now being generated in research labs worldwide, giving access to any color imaginable through nonlinear optics,” Trebino says. “The European Union is now building the highest intensity laser systems ever, which could lead to new discoveries of exotic physics.”

In Georgia Tech, Raman studies the fundamental behavior of atoms at much longer timescales – in milliseconds or seconds rather than femtoseconds. For this work, the tools are different from the femtosecond laser he built as a Ph.D. student. Still, he says, “the tinkering I did with the CPA laser shaped my current research to bring out interesting properties of atoms.”

The other half of the 2018 Nobel Prize in Physics goes to optical tweezers. Using laser beams, these tools grab particles, atoms, viruses, and living cell and enable their inspection and manipulation under a microscope. Arthur Ashkin, formerly of Bell Labs, receives half of the 2018 prize for this invention. 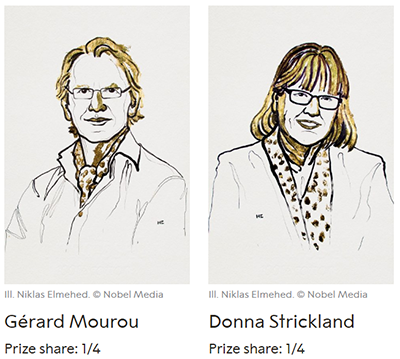 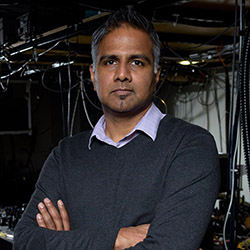