Corals are the foundation species of tropical reefs worldwide, but stresses ranging from overfishing to pollution to warming oceans are killing corals and degrading the critical ecosystem services they provide. Because corals build structures that make living space for many other species, scientists have known that losses of corals result in losses of other reef species. But the importance of coral species diversity for corals themselves was less understood.

A new study from two researchers at the Georgia Institute of Technology provides both hope and a potentially grim future for damaged coral reefs. In their research paper, "Biodiversity has a positive but saturating effect on imperiled coral reefs," published October 13 in Science Advances, Cody Clements and Mark Hay found that increasing coral richness by ‘outplanting’ a diverse group of coral species together improves coral growth and survivorship. This finding may be especially important in the early stages of reef recovery following large-scale coral loss — and in supporting healthy reefs that in turn support fisheries, tourism, and coastal protection from storm surges.

The scientists also call for additional research to better understand and harness the mechanisms producing these positive species interactions, with dual aims to improve reef conservation and promote more rapid and efficient recovery of degraded reefs.

But the ecological pendulum swings the other way, too. If more coral species are lost, the synergistic effects could threaten other species in what Clements and Hay term a “biodiversity meltdown.”

“Yes, corals are the foundation species of these ecosystems — providing habitat and food for numerous other reef species,” says Clements, a Teasley Postdoctoral Fellow in the School of Biological Sciences. “Negative effects on corals often have cascading impacts on other species that call coral reefs home. If biodiversity is important for coral performance and resilience, then a ‘biodiversity meltdown’ could exacerbate the decline of reef ecosystems that we’re observing worldwide.”

Clements and Hay traveled to Mo'orea, French Polynesia, in the tropical Pacific Ocean, where they planted coral gardens differing in coral species diversity to evaluate the relative importance of mutualistic versus competitive interactions among corals as they grew and interacted through time.

“We’ve done the manipulations, and the corals should be competing with each other, but in fact they do better together than they do on their own,” says Hay, Regents Professor and Teasley Chair in the School of Biological Sciences. Hay is also co-director of the Ocean Science and Engineering graduate program at Georgia Tech. “We are still investigating the mechanisms causing this surprising result, but our experiments consistently demonstrate that the positive interactions are overwhelming negative interactions in the reef settings where we conduct these experiments. That means when you take species out of the system, you’re taking out some of those positive interactions, and if you take out critical ones, it may make a big difference.”

Under the sea, in a coral-growing garden, in the shade

Coral reefs are under threat worldwide. Hay notes that according to the EPA, the Caribbean has lost 80 to 90 percent of its coral cover. The Indo-Pacific region has lost half of all its corals over the last 30 years. During the bleaching event of 2015-2016 alone, nearly half of the remaining corals along the Great Barrier Reef bleached and died.

“The frequency of these big bleaching and heating events that are killing off corals has increased fairly dramatically over the last 20 to 30 years,” he says. “There are hot spots here and there where coral reefs are still good, but they’re small and isolated in general.”

In their coral gardens in French Polynesia, Hay and Clements manipulated the diversity of the coral species that they planted on platforms resembling underwater chess tables, to try and see if species richness and density affected coral productivity and survival.

Hay notes that many previous, similar experiments involved bringing corals into a lab to “pit species against each other.” But he points out, “We do all of our experiments in the real world. We’re not as interested in whether it can happen, but whether it does happen.”

An experimental setup suggested by Clements involving Coke bottles helped the scientists arrange their garden. The end tables “have Coca-Cola bottlecaps embedded in the top of them,” Hay says. “We can then cut off the necks of Coke bottles, glue corals into the upside-down necks of these things, and then screw them in and out of these plots.  This allows us to not only arrange what species we want where, but every couple of months we can unscrew and weigh them so we can get accurate growth rates.”

The researchers found that corals benefitted from increased biodiversity, “but only up to a point,” Clements notes. “Corals planted in gardens with an intermediate number of species — three to six species in most cases — performed better than gardens with low, or one, species, or high, as in nine, species. However, we still do not fully understand the processes that contributed to these observations.”

Clements says their research demands more investigation. Why do corals perform better in mixed species communities than single-species communities? Why does this biodiversity effect diminish — rather than continue increasing — at the highest level of coral diversity?
“We need a better mechanistic understanding of how diversity influences these processes to predict how biodiversity loss will impact corals, as well as how we may be able to harness biodiversity’s positive influence to protect corals,” says Clements.

The Georgia Institute of Technology, or Georgia Tech, is a top 10 public research university developing leaders who advance technology and improve the human condition. The Institute offers business, computing, design, engineering, liberal arts, and sciences degrees. Its nearly 40,000 students, representing 50 states and 149 countries, study at the main campus in Atlanta, at campuses in France and China, and through distance and online learning. As a leading technological university, Georgia Tech is an engine of economic development for Georgia, the Southeast, and the nation, conducting more than $1 billion in research annually for government, industry, and society. 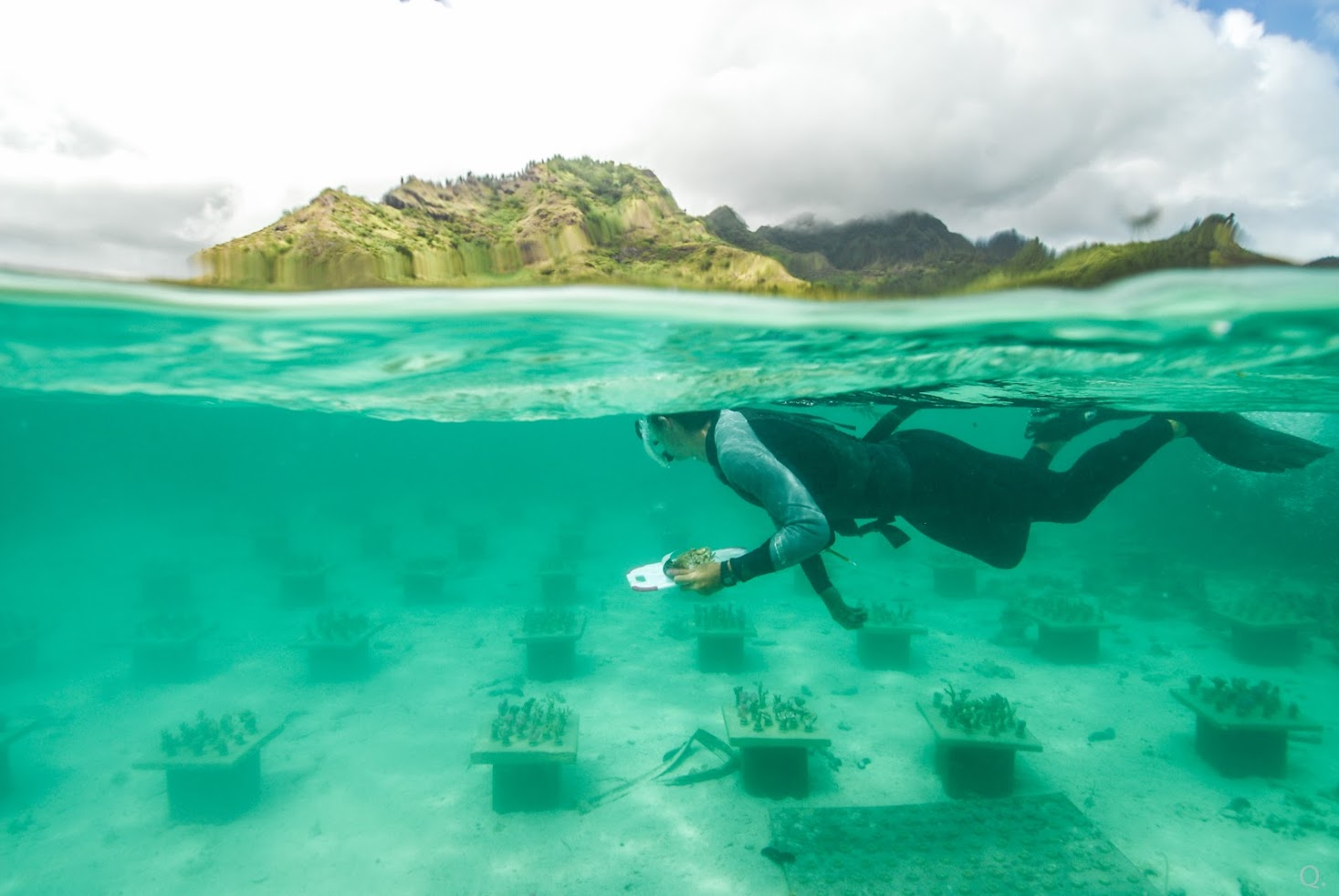 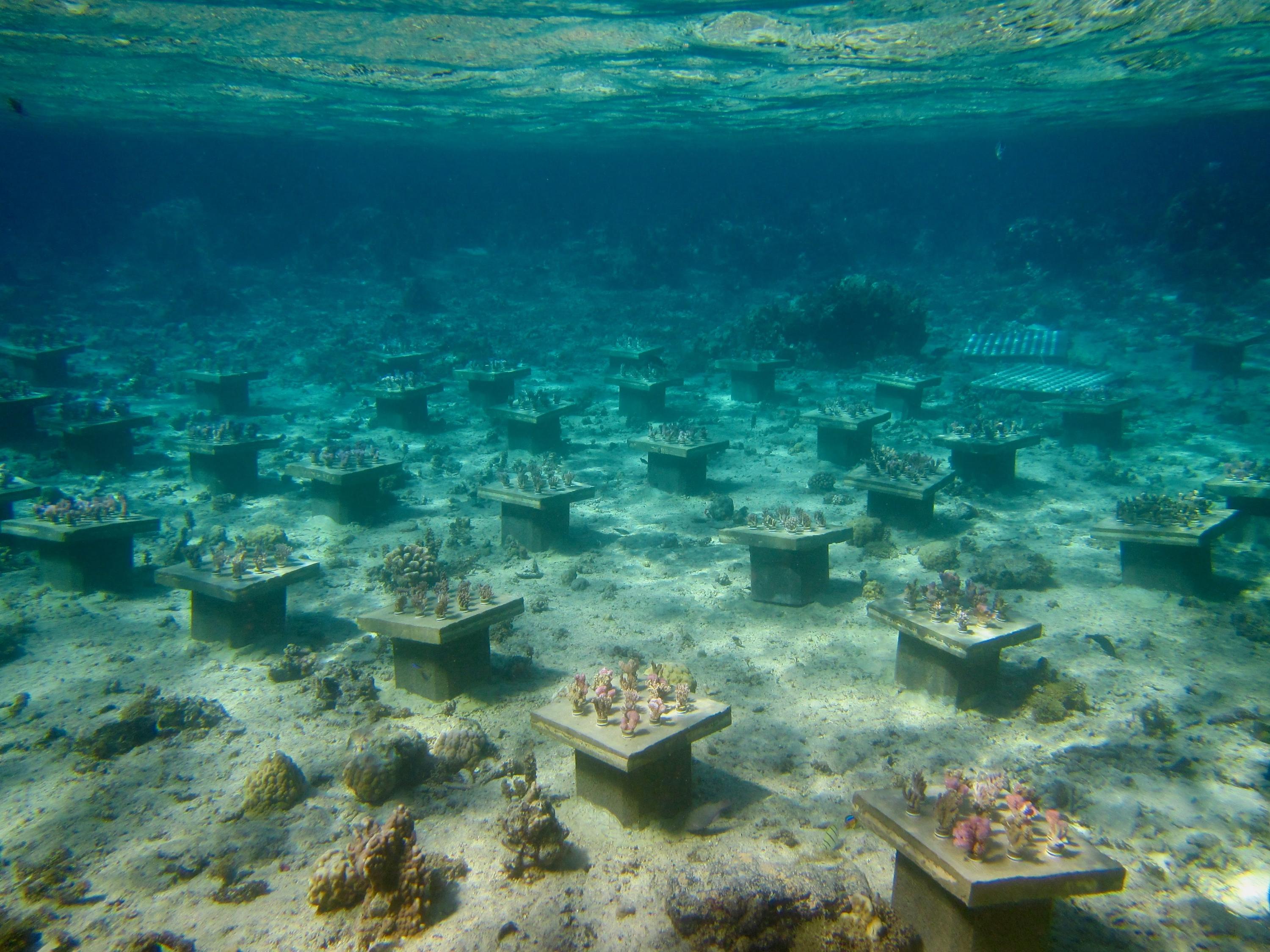 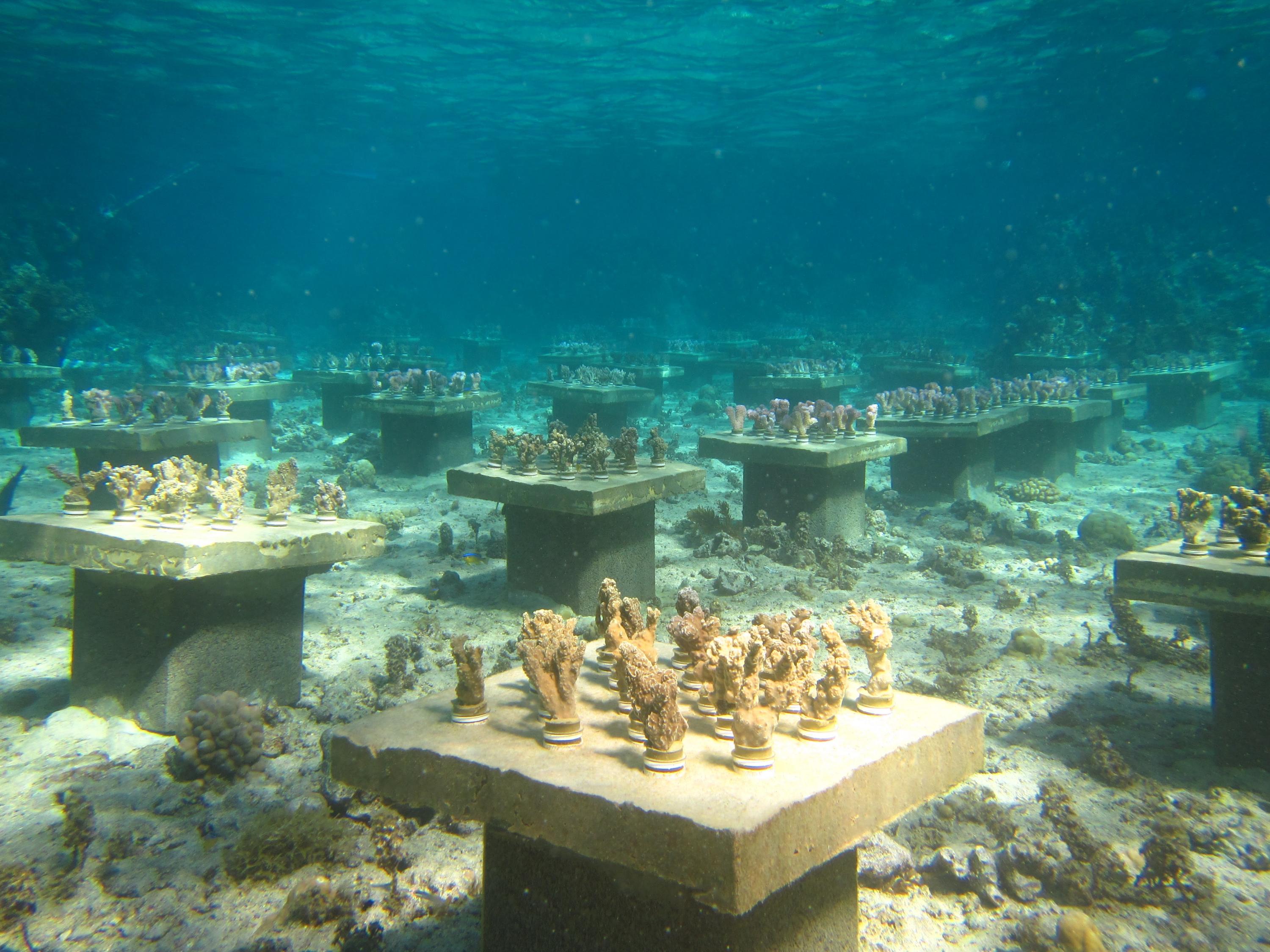 Coral diversity on display in the underwater gardens set up by Georgia Tech researchers near French Polynesia. (Photo Cody Clements) 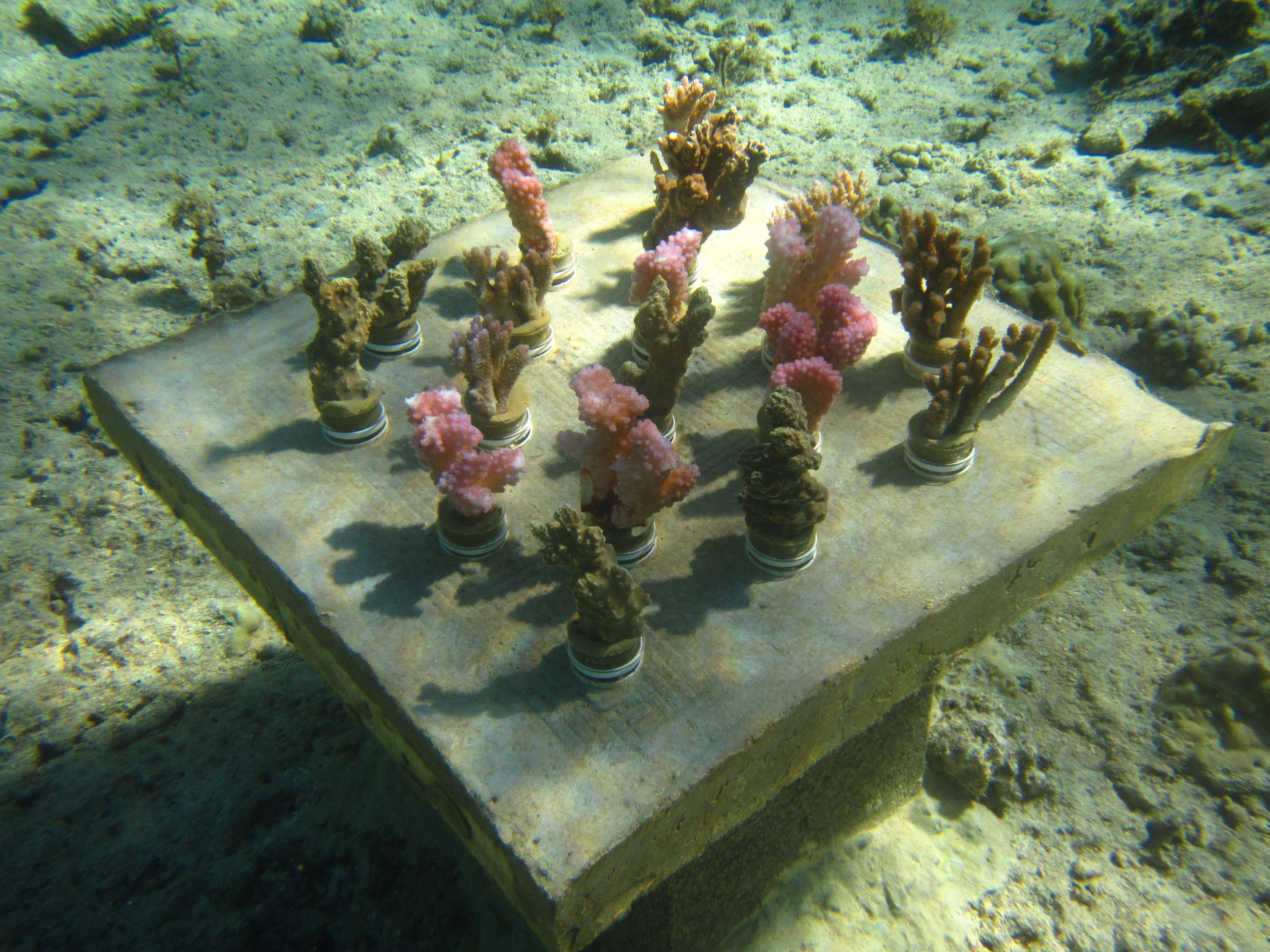