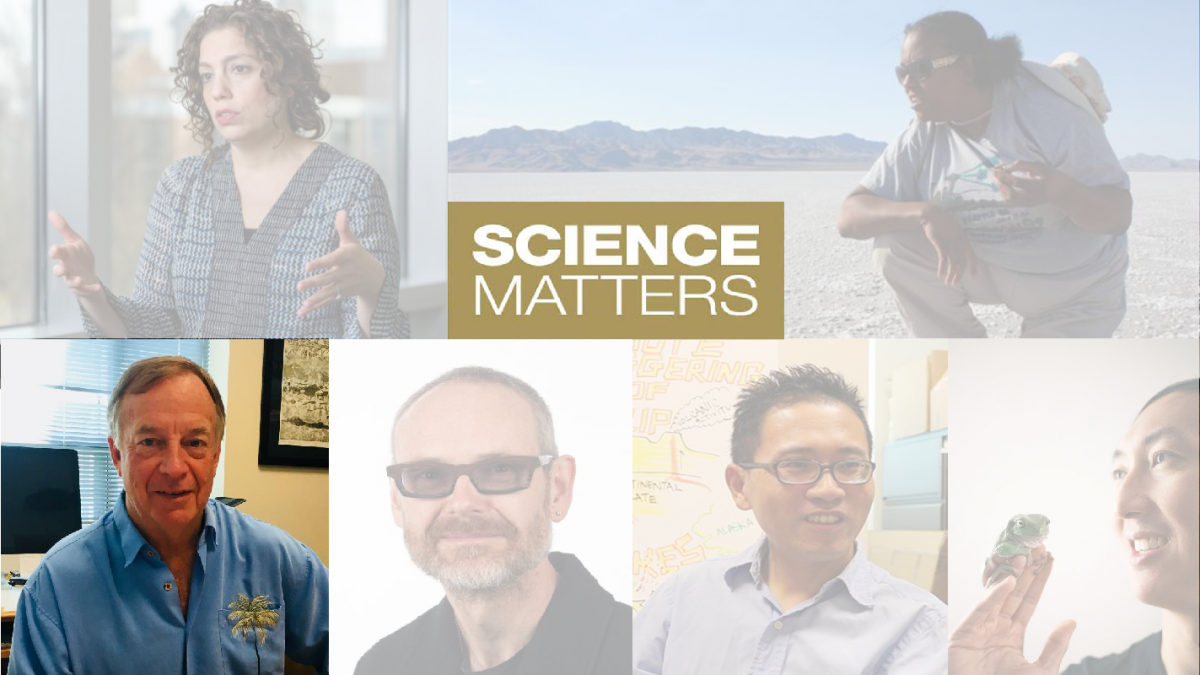 One of the top algae scientists in the world, award-winning School of Biological Sciences Professor and Chairman Mark Hay, gives a grim prognosis for the world’s coral reefs. First of a two-part episode.

Hello and welcome to ScienceMatters, the podcast of the Georgia Tech College of Sciences. I’m Renay San Miguel.

Renay San Miguel: For more than 35 years, Mark Hay has been scuba-diving in the vastness of the world’s oceans, hunting down one of its most important inhabitants.

Renay San Miguel: Hay, Regents professor in the School of Biological Sciences, is one of the leading researchers on algae, photosynthetic organisms found in fresh and salt water. They contain chlorophyll, but -- strictly speaking -- they’re not plants. Seaweed and kelp are some of the larger varieties, yet there are other sizes and types of algae living in the Earth’s oceans.

Renay San Miguel: Certain corals and smaller algae form a symbiotic relationship that help maintain the health of those oceans. Corals are tiny sea creatures that secrete a hard exoskeleton. Get enough of those exoskeletons together and you have coral reefs, which serve as homes for a quarter of the world’s marine life, including other kinds of algae that serve as fish food. Corals, in turn, get nutrients from algae.

Hay developed the field of algal chemical ecology, and later co-founded the larger discipline of marine chemical ecology. His work has helped illuminate just how much trouble ocean ecosystems are in, thanks to climate change, ocean warming, and overfishing.

Those can throw the delicate algae-coral balance out of whack. Warmer water forces corals to expel their symbiotic algae, causing reefs to turn white – or bleach. Catch too many of a reef’s algae-eating fish, and the resulting algal population explosion threatens that ecological balance because they reduce the ability of corals to defend against pathogens.

Mark Hay: An award for algae may seem unusual, but I want to argue that algae in fact are extraordinarily manipulable, and have given us great insight into how the oceans work.

Renay San Miguel: A lot of that insight is due to Hay’s research. His studies now have him worried that the oceans aren’t working. Coral reefs, ecosystems that once teemed with color and life, now make him sad.

Renay San Miguel: Hay, also the School of Biological Science’s Harry and Linda Teasley Chair, has seen his work used in efforts to save coral reefs, so he remains optimistic. But while attempting to restore balance in these ecosystems, his latest research has uncovered new challenges; in one instance, new threats have emerged from hungry starfish and snails.

I interviewed Hay in his office in Georgia Tech’s Ford Environmental Science and Technology Building. I began by asking him where marine ecology stands in 2019.

Mark Hay: I would have argued, up until the last few years, at least for what we work on—coral reefs—that overfishing was driving reefs to near extinction. And that's what I had seen for a number of years.

But then, within the last couple of years, warming has gotten so overwhelming. Two years ago I went to a really remote place in the center of the Pacific. I hadn't been there before, but when I got there, I knew from previous workers, that there were supposed to be about 70 percent coral cover. And we got in the water and there was all this wonderful structure standing there dead, overgrown by stuff, and the whole Pacific had heated for like 10 months straight and just cooked these corals. That same year you lost like half the corals along many parts of the Great Barrier Reef in one year. So I started working in the Caribbean in the late ‘70s, and the average coral cover was about 60 percent, now it's around 6. And in the Pacific, we lost half of the corals in that same time period. But then we lost half of them again in one year.

Renay San Miguel: Quick question. I've seen pictures of coral reefs that are abundant with life. A lot of people have. What does a dead coral reef look like?

Mark Hay: It looks like an algal-covered parking lot. The coral dies from heat or from competition with the algae—if you overfish the algal-eating fish, then the seaweeds can kill the corals—but you end up with sort of a miniature mass of bushes that are standing out there, and they don't attract the same kind of fish or as many fish. They don't serve the same function. The corals really start falling apart pretty quickly after they die. And by that, I don't mean within days. But coral reefs are these concrete structures that are growing all the time, because that the corals are little cement factories they grow up toward the surface, and there are sponges and fish and stuff that are wearing away at that all the time. So if the corals are healthy, they accrete in excess of the erosion, the bio-erosion.

Once they die, then those bio-eroders actually really take off. And so pretty soon you've got, instead of this cool structured reef, you've got a bunch of rubble laying there and then in the next storm it just gets thrown up on the beach or put down in deep water or something and turned to sand.

Renay San Miguel: That has to be so discouraging if you've been studying these for a long time like you have. That must be just—your heart must sink.

Mark Hay: You can still do things in the Caribbean. You still do science and you can do important science. But you know, you're working with just a shadow of what used to be there. And so we've moved to the remote areas of the Pacific. I mean, we're working in French Polynesia, Fiji, and the Solomon Islands and stuff, because they're less inhabited, less impacted. The reefs are available for study, and, you know, we can we can look at the full complement of what's going on and maybe figure out how to save some of those reefs or get the others back.

Renay San Miguel: On top of all the other things that reefs are going through with warming ocean water and climate change and all of that, you and another Georgia Tech researcher, a Ph.D. candidate, Cody Clements, published a study in July of 2018 that highlighted yet another threat to reefs that are alive. Can you talk a little bit about that?

Mark Hay: Yeah we've done a couple of things. The place where we were working in Fiji was really fortuitous for us because the villages along that stretch of coastline, some of them had been very proactive and erected these marine-protected areas about 10 years before we got there. They're very small; they're the size of a few football fields, but they're very well enforced. They are—if you go in the water near that village, that's just like here going into someone's house. You don't go in uninvited, you don't do something you're not supposed to do, or there could be similar consequences to showing up in someone's house in the middle of night. And so they control it very well. And those reefs had changed from sort of these algal-covered parking lots to become almost all coral and almost no seaweeds, like the Caribbean was when I started there.

Mark Hay: And where they continued to fish, was almost all seaweeds and almost no corals, like the Caribbean is now. So when we're making these contrasts, we can say well, 50 years ago it was like this and today it's like that. I bet it was overfishing. But there's also been coastal development and pollution and heating, and so it's hard to sort that out.

Here we had three areas that were overfished right next to three areas that were not; the same reef, so it's replicated. And so we could move back and forth between, let's call it the Caribbean of 1960, and you could swim 100 meters, and now you've got the Caribbean of 2018. And we could do various experiments there to sort of ask what else is going on that we might have missed. And the two things we have looked at: One of them, there's something called crown-of-thorns starfish that, back in ‘60s and ‘70s, people started noticing there were outbreaks of these and they eat coral. And if they're at high abundance, they eat most of the coral, and then they just line up in a mass and they walk down the reef like a lawn mower just devastating everything.

It’s really quite impressive. I mean, in Guam, there was like, I can't remember, 60 miles of reef was just eaten, and these guys sort of marched down over here, too. And so we started thinking about this. Well, you know, once you get these protected areas that’s got a lot of coral, where are these coral-eating things going to go? You know, is this like pouring a pile of candy in the middle of the daycare center and thinking it's going to persist?

Nobody really understands, even to today, where the babies come from; there's like almost none around, and then, all of a sudden, there's a big bloom of these things. And what we think is going on is that the babies are settling under rubble in the really damaged areas—these algal-overgrown things. Staying down in the rubble until they get big enough to ward off predators, then they emerge, and then they smell all this coral that’s 100 meters away, and they all head over there.

We found that that these predators were attracted to the good areas. And so once you succeed and rebuild one of these small reefs well, you may be at risk of the starfish coming in and eating the corals.

Now the other part of this is, there were some gastropod snails that eat corals. This was a species that—we called it “the tick” or “the vampire snail”—it sort of sits at the base of the coral and it sucks out tissue, and the coral tries to recover that tissue just like if you get a wound, you know, you start reallocating resources to that wound.

And so these guys just start sucking at the base and they sit there, and so you don't see a trail, you don't see damaged stuff, you just see, you know, a few snails sitting around. And so we planted out some of these corals and put different sized snails on them, and showed that they were actually slowing the growth of the coral by 20 to 40 percent, which is a big deal at the densities we were using. And we saw them then at huge densities in the overfished areas. And so what was happening, many of the susceptible corals are already gone. There's a few tough corals that are kind of the last man standing in these damaged areas. Those were the ones these guys were eating, and so they're killing off your last chance. And we were finding just dramatically high densities of these things in the damaged area on the little bit of coral that was left.

Renay San Miguel: That sounds ominous. Hay also knows that the recent steady drumbeat of bad news about coral reefs can make it sound like it’s too late to save them.

Yet Hay says there is a chance some reefs can heal themselves -- if given the chance.

That’s coming up in Part Two of our conversation with Mark Hay, Regents Professor, and Harry and Linda Teasley Chair of the School of Biological Sciences.

Siyan Zhou, a former research associate with the School of Psychology, composed our theme music.

If you like what you hear on this podcast, we invite you to subscribe at either Apple Podcasts or SoundCloud.

This is ScienceMatters, the podcast of the Georgia Tech College of Sciences. I’m Renay San Miguel. Thank you for listening.