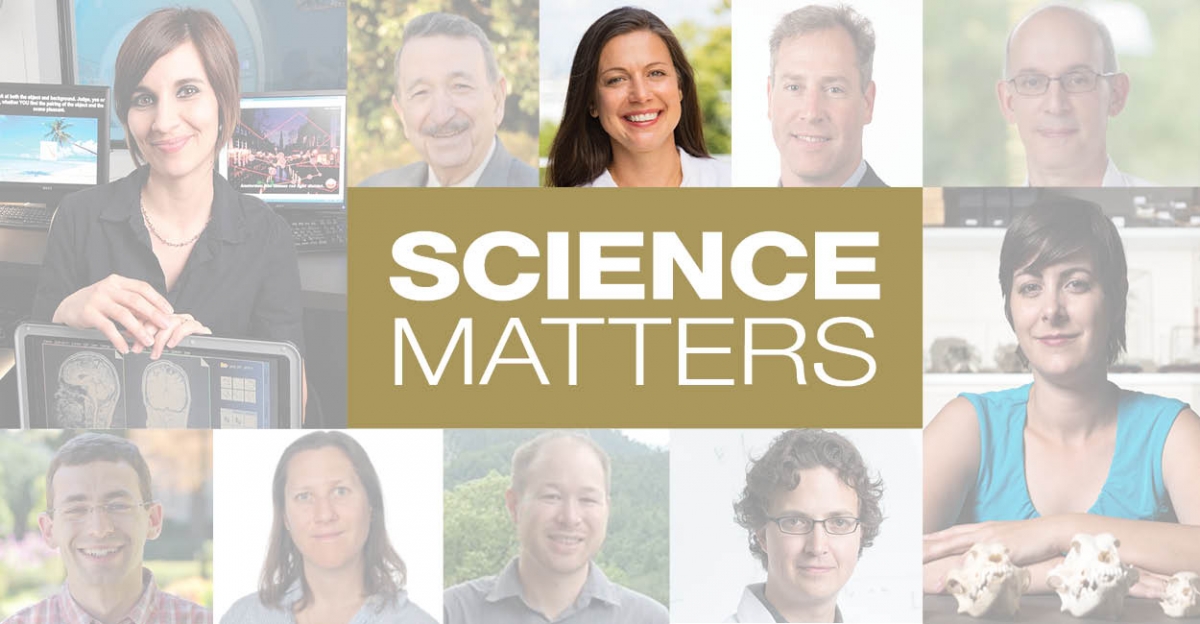 By day, she’s Jennifer Leavey, senior academic professional in the School of Biological Sciences. When she straps on a guitar, Leavey becomes Leucine Zipper, leader of the rock band Zinc Fingers. For a change of pace, ScienceMatters samples the band’s science-inspired songs. Leavey shares how the band uses music and other media to teach science.

Hello and welcome to “Science Matters,” the podcast for the Georgia Tech College of Sciences. I’m Renay San Miguel. Today, something a little different for you.

Why you always trying to organize things.

Why put order where it’s not meant be.

“Why put order where it’s not meant to be. You can’t control atoms. You can’t control me.” That’s a key line from a song called “Entropy.” Leucine Zipper and Zinc Fingers’ ode to chaos and disorder. The name of the band is a reference to specific protein structures. It’s also a clue to what the music is trying to accomplish, which is art in the service of science education.

Watch them scatter as they fall.

Twist and shout. Move all about.

During the day, Jennifer Leavey is a senior academic professional in the School of Biological Sciences. She’s also coordinator of integrated science curriculum for the College of Sciences and is director of the Georgia Tech Urban Honey Bee project. But when she dons a shiny black wig and plugs in her guitar, she becomes Leucine Zipper, Leavey’s genetically modified clone. The members of her band, first formed in 2014, include other Georgia Tech faculty and alumni. And yes, they’re also clones. She hopes to use her band and its music, along with an irreverent science magazine called charged to teach university students about science concepts. It’s a popular approach for many other educators and students, as you can find out yourself if you search YouTube. Leavey’s efforts to sing the praises of sciences are receiving funding from the Creative Curricular Initiatives, also called CCI, of the Georgia Tech Office of the Arts, and the Georgia Tech Arts Council. Her project is one of 16 funded in 2017.

It takes genetics. It’s not luck. You keep on playing, but your band still sucks. But…What if we all had the rock gene?

Like proteins binding themselves to DNA, Leavey hopes her music and magazine become part of an ever-expanding chain of educational initiatives that use artistic expression to teach about science.

Rock and roll for me and you.

You hear a lot of Leavey’s musical influences from her own college days. Joan Jett, The Ramones, Iggy Pop and the Stooges. She was in a popular Atlanta garage punk band called Catfight, before her love of music and science started to mix. 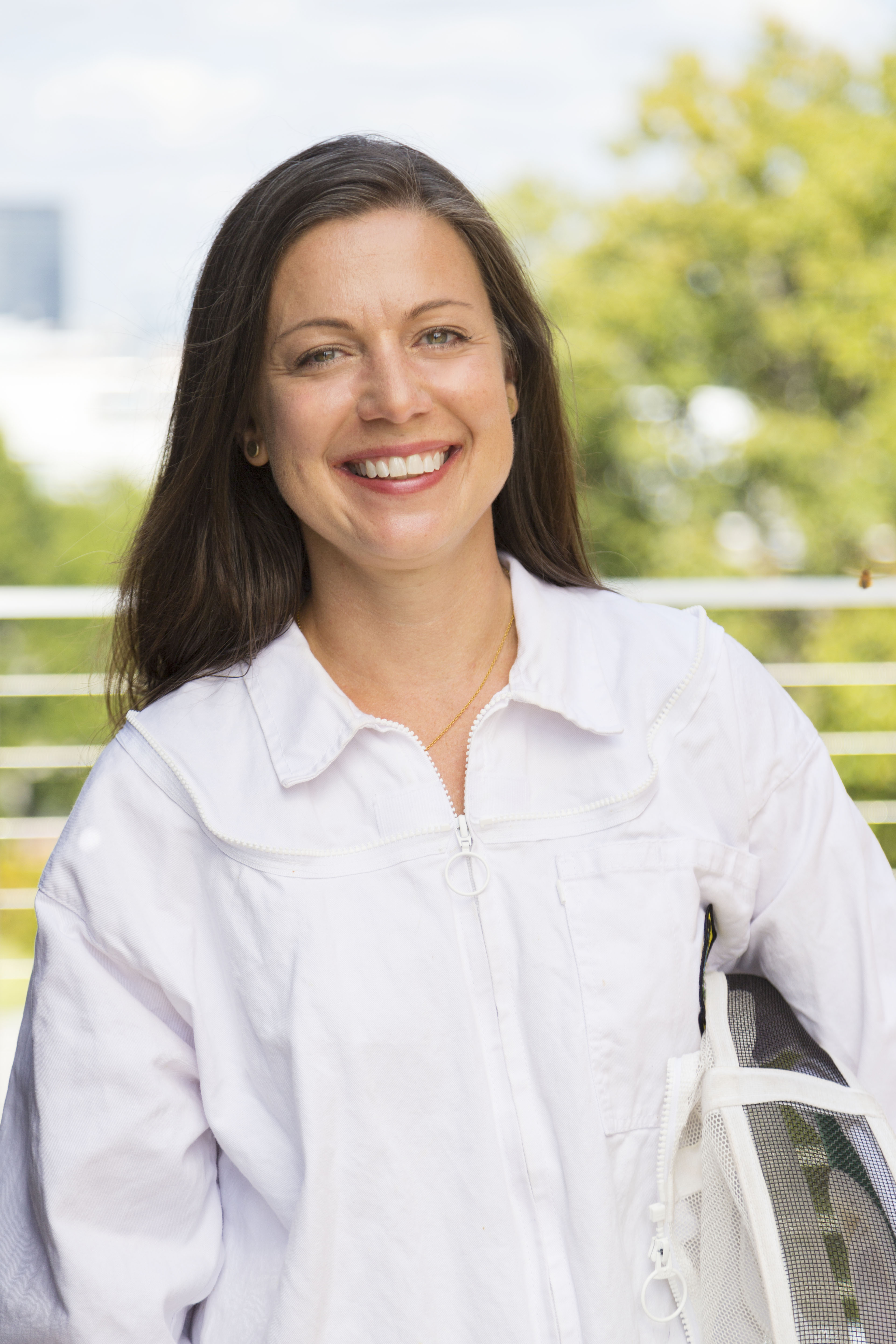 The name came from when I was taking Biochemistry in college, I was learning about these protein motifs that you find in DNA binding proteins. And one of the motifs is called a Leucine Zipper, and the other one is called a Zinc Finger. And even when I was in college I was playing in rock bands, and I thought, oh, that’s such a great band name. Either the Zinc Fingers or Leucine Zipper. And so, it’s been my dream to one day be able to take this science name and turn it into a real, live rock and roll band.

You know, some folks, their dream is Nobel Prize. [laughter] Others is to win a Grammy for best rock artists or whatever. You’ve kind of blended those two!

Yeah, I don’t if either of those are in my future, but at least the band is here, yeah!

And when did you start the band? When did all this start coming together for you?

Well, when the very first Atlanta Science Festival was in its planning stages, we were brainstorming the types of events that you might find at a festival like this. So the goals of the Atlanta Science Festival are to make science fun and accessible and really do creative and arts related things as they relate to science. So, yeah—again I’ve been playing in bands for a lot of years and so I decided this was the time. This was the time to start writing rock songs about science and start playing out.

Renay San Miguel:
Was there anything that prompted that particular approach of using rock and roll to help teach about DNA and molecules and binding and things like that? You know, why this approach for that?
Jennifer Leavey:

Right. Well I must admit, it’s really selfish. So it’s just the kind of music that I like to listen to and that I like to play. But I have really been inspired by quite a number of different artists that have sung about science and rapped about science. So probably the example that—the best example of that is Baba Brinkman, who is a science rapper.

[rapping] Because that’s the only way to keep your DNA up in the race. Which explains a lot, like how animals and plants all behave in the wild. So next time you shake hands or break dance or make plans, don’t forget the straight facts. The information that makes your brains and hands comes from one place: DNA strands.

[singing] We are made of DNA.

I really wanted to write songs that were fun to listen to on their own, whether or not you knew what they were about. So a lot of the songs are sort of coded. For example, one of the songs is called, “Stuck On You.” And if you just listen to it without knowing what it’s about, it sounds like a love song. It’s just, you know, a song back and forth about, you know, really being attached to someone. But the song is actually about bacteria living in biofilms together. And the mechanisms that regulate biofilm formation like quorum sensing. So it’s a pretty complex topic, but it’s guised in a love song. So the level of science that we sing about in our songs is college level. And all of the other faculty members in the band either teach at the AP level in high school or at the introductory level in college. And so, we’re talking about chemical principles like entropy. We’re talking about biological principles like behavior, reproduction. And that’s what our songs are focusing on. The CCI project is really interesting to me because it’s making me focus on how we can use these songs in the classroom.

I’ve had projects before where I’ve encouraged students for extra credit to write songs like this, and it’s a really, really fun project. There have been a lot of good examples, and if you look on YouTube and just look up almost any topic that you can find in a college science course, you can find some really, really great music videos that are made, usually with modified lyrics of existing songs. So that sort of Weird Al approach where you change the lyrics to a song. One I love to use in my classes and have for years is a song called, “Oxidate It or Love It.”

[“Oxidate it or love it” by Tom McFadden]

[rapping] Dehydro inner-membrane of the mitochon. Using NADH from Kreb’s to pump protons. Thanks to electrons, which we’re transporting, so important that we got switch it to the next song.

That was written by a couple of Stanford graduate students, and they made a great music video. It had mashup of a couple of different tunes, but it explains oxidative respiration and glycolysis. These are, you know, pretty complicated topics that you learn about in introductory biology.

When you have played at Atlanta Science Festivals, or in front of any audience, the target audience, what’s been the reaction? What are you hearing?

Well, sometimes it’s surprise, right? Because, it’s very unusual to have—first of all, we dress in costume in this sort of futuristic, you know, genetically modified scientist appearance. And then, you know, if we’re playing to a crowd that isn’t an academic audience or a student audience, I think that frequently they’re quite surprised that anyone would come out there and start playing loud rock and roll music like this. People aren’t surprised when we play in traditional rock venues, and that’s a really fun way to approach it too. We’ve written these songs, you know, to be appreciated by scientists, but so far, the people who appreciate them most are rock fans. So. [laughter]

Tell me about the digital magazine, “Charged.” This is also a part of your CCI funding, another way to, I guess, reach the target audience with science.

Right. Well I am all about people thinking creatively about science. Right? So I love to write songs about science, but I also like to write science Haikus. Or think about science in the context of a craft activity. Like maybe, I could make a costume or you know, maybe I could bake some cookies with some kind of scientific theme. And so “Charged Magazine” is an online magazine, and we recently had our first pilot print issue. And it is trying to take the kind of vibe that you would get from a music magazine or an entertainment magazine and apply it to science. So that people—primarily the target age would be 16 to 24-year olds—can think about science in a different light. When you see the science magazines on the shelves at the bookstore, you see “Discover Magazine,” or “Scientific American,” and you pick them up and they’re dry and honestly, they don’t speak to me as a woman. They have a sort of, I don’t know, popular side, rockity kind of vibe, but the pictures on the front are almost always planets or rockets. And I don’t think that necessarily appeals to everyone who has an interest in science.

Sure. So maybe more irreverence more, just like the kind of thing that the demographic would read in something like Rolling Stone or that kind of magazine.

Yeah, absolutely. We’re trying to tap into—yeah. When you flip open a fashion magazine and you have a quiz. You know? That’s a fun thing to interact with. Let’s have some science quizzes in a magazine, you know. What kind of scientist would you be, if you circled “A” for this question?

The CCI funding pays for a studio recording session, taping a music video, and publishing a print version of “Charged.” All of that should be available in Fall 2018. “Oxidate It or Love It” is performed by Tom McFadden and Derek Davis of Stanford University. “DNA” is performed by Baba Brinkman, and it’s from his “Rap Guide to Evolution” video series. Both can be found on YouTube. I’m Renay San Miguel, and you’ve been listening to “Science Matters” form the Georgia Tech College of Sciences. [electronic music]