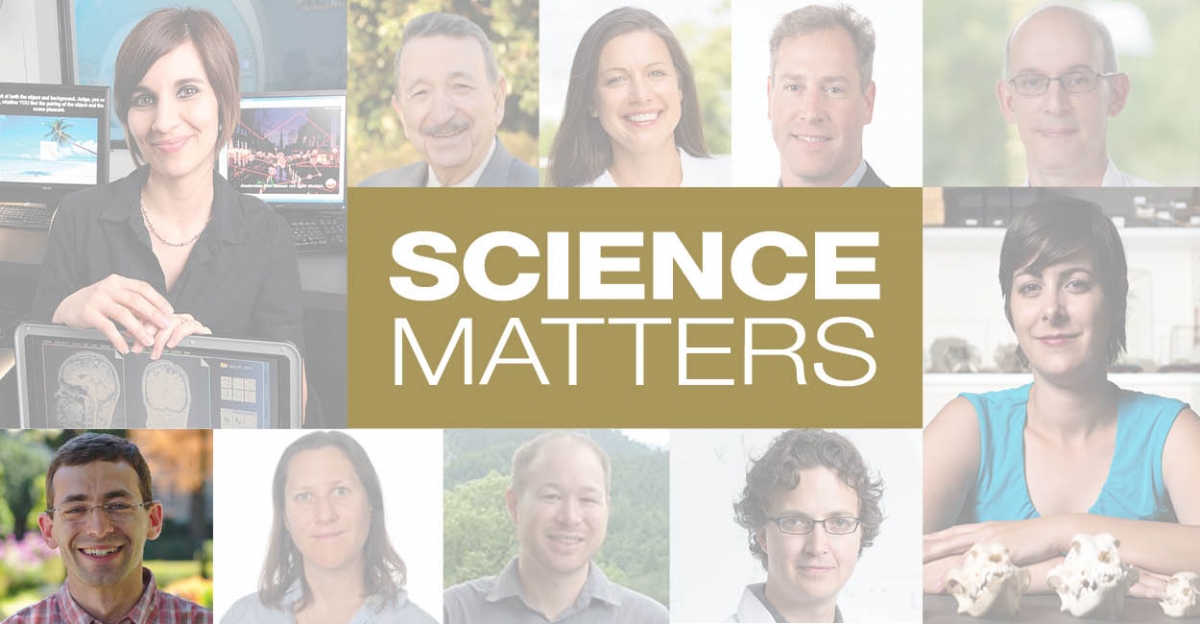 School of Mathematics Professor Dan Margalit describes the beauty and creativity in his research area, topology, while we reveal its connection to the oldest of math jokes. Margalit also offers ways to help students overcome fear of mathematics.

Hello, I’m Renay San Miguel and this is ScienceMatters, the podcast of the Georgia Tech College of Sciences.

(Voice of students at poster session)

Welcome to a summer REU, or Research Experience for Undergraduates, sponsored by the National Science Foundation. The voices you hear are from the poster session of students attending the 2018 summer REU in the School of Mathematics.

What’s a poster session? In this case, it’s where undergraduates practice their presentation skills by talking about their summer research projects. They show their work on paper posters, and they tell you about it.

Here are brief snippets of what those conversations sounded like at this poster session:

We’ve been looking at the patterns between the colors that show if there could be some, like, certain power or some certain pattern that we always see.

It’s a special kind of invariant. There’s a complicated mapping with some stabilization between two Legendrian knots that are coupled, so this is a standard Legendrian trefoil.

So for our project, we are in the world of complex dynamics and we’re using topology to study it further, so we start with the rabbit polynomial and we are composing it with a Dehn twist.

This kind of language can trigger a fear of math among current and former students. Never mind that their names may reflect the mathematicians who discovered these properties, or that in the case of the rabbit polynomial, loopy shapes in the solutions of these equations that kind of look like rabbit ears. They just sound complicated.

They’re from the world of topology, a form of geometry that studies the properties of shapes that can change and be deformed, but never broken or torn. Imagine geometric shapes made of rubber, twisting and bending in continuous lines to form new shapes.

It just makes you – really just gives you a great appreciation and wonder for the beauty of math.

We’ll talk more about topology, which Margalit researches at Georgia Tech, in a moment. Let’s talk first about that math anxiety or math phobia – and how it impacts America’s need to graduate more science, technology, engineering, and math students.

You sit down to take a math test, and you feel your heart beat faster, and your palms start to sweat.

You’re listening to Pen-Pen Chen narrate an educational video about the work of Orly Rubinsten. Rubinsten researches the neuro-cognitive aspects of mathematics at the University of Haifa in Israel.

This video is produced by the TED-Ed group, the branch of the famous TED Conferences that focuses on education. Rubinsten’s work is the basis of this video.

This phenomenon is called math anxiety and if it happens to you, you’re not alone. Researchers think about 20 percent of the population suffers from it.

Rubinsten’s research shows worrying about mathematics can impact classroom performance. Rubinsten advises students to use relaxation techniques, get some exercise, and write down their worries to deal with the physical effects of math anxiety.

She also encourages teachers to give students the time they need to learn, and to look for creative, playful ways to teach mathematics.

That kind of thinking ignited a spark within Margalit when he was a sophomore at Brown University, thanks to a math professor named Thomas Banchoff.

How do you deal with math phobia among those you’re trying to teach?

Yeah, I mean, that’s a big question. A lot of people have negative experiences when they’re kids and they carry that with them into my classes. So you know, when I think of teaching students that, you know, if you think of the analogy of pouring water into a jug, it’s – I don’t think ‘what’s the most efficient way to pump water into the jug. The question I ask is: How do you open the jug? How do you get the mind ready to receive mathematics? And it could be by getting to know the students, knowing their names or a little bit about them, but it could also be by doing an interactive activity and getting them, you know, ready to think and do things on their own.

Margalit has ideas on how to open up mathematics to a wider audience of students.

If you go to a science night or assembly at school, in an elementary school, you’re going to see a lot of physics, chemistry, and biology. You’re going to see baking soda volcanoes. And those are the things that get students excited about physics and those other sciences. It’s not the textbook; it’s those experiments. And so that’s something – you know, math, I think we’re behind on that. We need to have more of those outreach programs, and we need to have our own baking soda volcanoes. I’ve done a lot of outreach where I’ve done sessions on the mathematics of soap bubbles, or fractals, or – once I did a session on magic squares, and that’s not straight out of the textbook, and it’s just something fun and playful.

You know, I had a girl, when I did this last year, and she said, “You know, I never knew I was good at math until today.” And just, you know, we all hear about stories like that, and those are the moments that change kids’ lives, and they don’t happen from reading the textbook.

When I was in eighth grade, my teacher had like this competition thing, I didn’t know it was a competition so it was like an online game so I did it because I was competitive, and like I didn’t know it was legit, and so I ended up getting in like the top of my state and I got kind of honored for it, and so I guess that’s kind of like what put my mind towards going towards math.

I don’t like reading from textbooks, and I don’t necessarily like doing homework, and so it’s getting outside of what we normally think of as math that got me interested.

The math that Janet Huffman is interested in now is the same kind that fires Margalit’s research – topology. As we mentioned, it’s the study of relationships between surfaces, shapes, and objects that can be continuously bent, twisted, and deformed, but never broken or torn.

Topology and its various forms, such as knot theory or braid theory, has applications in computer science, physics, biology, robotics, and economics.

Here’s an amazing topology fact that I love. So the Life Saver is a donut, right? You think of it as a donut, and here’s a question: What is the shape of the outside of the donut.

Now again, you’re allowed to stretch things just like I said, the surface of a basketball we’d consider the same as the surface of a football. You have to do some stretching here because obviously the outside of a donut is way bigger than the inside of a donut. But if you allow yourself to think of it as being made out of rubber, those two shapes are actually the same.

In Topology World, a circle can morph into an oval or ellipse. And a coffee cup can become a donut. In fact, that’s an old math joke:

So what’s a topologist?

Someone who can’t tell the difference between a coffee cup and a donut!

Google “coffee cup to donut.” You’ll see what we mean, and maybe you’ll understand the playful aspects of topology that Margalit loves.

There are subsets of topology, as we mentioned, such as braid theory. That works exactly like it does in a hairstylist’s salon, Margalit says. Hair, or strings, or lines representing data, passing over each other to form a braid. It shows up a lot in math and science applications.

One example of a braid is where you have, say, vehicles, autonomous vehicles maybe, moving around in a city or on a factory floor, and here’s how that makes a braid: If you have the robots moving around on a floor, and imagine the floor is moving up in time kind of like an elevator, then what the robots are going to do is trace out these paths in time. And those are exactly what we think of as a braid. Their paths, in space, would then form a braid, they’d be tangling together. And it’s understanding that tangling that really is what braid theory is all about.

There’s many applications for braids. Another one that I just ran across is, in studying the stock market, there’s a way to assign a braid to stocks. As they change positions, one becomes more valuable than another. You can think of that as a strand of string crossing over another strand of string, and they can use this to detect an impending crisis in the stock market. Now, braids are used in quantum computers in cryptography. Even in screening drugs for cancer treatment, what they’ve done recently at the University of Chicago is they take a strand of DNA and knot it up, OK, and knot theory is very related to braid theory, and look for drugs that are smart enough at untangling the DNA, and that’s a way of actually searching for cancer drugs.

In 2017, Margalit co-edited a book for undergraduate math majors on geometric group theory, the study of the symmetries of objects. He also recently co-wrote an online textbook for one of his Georgia Tech classes called Interactive Linear Algebra.

The key word here is “interactive.”

Usually when I teach linear algebra, I’m showing pictures on the board – two-dimensional pictures – and I’m pointing at it and describing what it’s supposed to be representing in their minds. But when you have an interactive demo on the screen, you can rotate and zoom in and play with. You know, I did it for the students the first time: I saw their eyes just light up. All of a sudden you could just instantly see they could understand it better. And so if a picture’s worth a thousand words, then an interactive demo is worth a million words.

Since 2012, Margalit has helped to organize the Topology Students Workshop, a biennial summer conference at Georgia Tech for graduate students. Margalit and other mentors work with students to refine presentations and work on professional skills, such as communications and job searches. The emphasis is on women and students from underrepresented communities.

I think, though, when you don’t have as many role models as someone who looks like you doing math, those are the people that need the encouragement, someone to tell them, “Yes, I personally believe in you and you can do it.” And not only that but, “Here is, specifically, how you’re going to achieve your goals.”

You know, it’s often the case that if you read something written by a mathematician, you can’t understand the first line. It’s something too technical. And it’s often hard for us to take these very abstract things we’re thinking about and explain them in a very understandable way. So it’s something we need to work a lot on.

You can count on Margalit to keep working on better ways to sum up the beauty in mathematics for his students.

My thanks to Dan Margalit, professor in the School of Mathematics, and the author, co-author, or co-editor of the math textbooks A Primer on Mapping Class Groups, Office Hours with a Geometric Group Theorist, and Interactive Linear Algebra.

Also our thanks to the TED-Ed group for the use of their video.

Our theme music was written by Siyan Zhou, graduate student and former research associate in the School of Psychology.

I’m Renay San Miguel, and this has been ScienceMatters, the podcast of the Georgia Tech College of Sciences.